My wife and I arrived in my father-in-law's hometown of Zahí­nos on the evening of Saturday, August 4th, right at the height of the town's summer festival. Our daughter, Nora, who had not seen us in a week was ecstatic to be reunited with us. After sitting and chatting for a while with my wife's aunt, uncle and cousins, we headed down to the town fairgrounds for the most Spanish of all pastimes. A portable bullring had been set up and there were two bullfighters, including a hometown lad, scheduled to perform.

Personally, my taste for bullfighting has waned considerably over my years of living in Spain. I initially approached it with an open mind, a strategy that allowed me to see the beauty and transcendent greatness that caught Hemingway's eye. On the other hand, my empathetic heart cannot bear to watch a fellow animal be tortured and killed for the fun of it. The best arguments in favor of bullfighting go something like, "The industry supports the very existence of these animals, who would not be bred without it, and they live the cushiest possible bovine lives (thousands of times better than your average dairy heifer) right up until they enter the ring to be tortured and killed, relatively quickly (15 minutes)." As a humanist, I place a very high value on existence, and I can clearly see that the issue, like most, is not as black and white as the anti-bullfighting crowd would like to paint it. So I don't condemn people who like bullfights, but I'd really rather not go to any more myself.

In this case, however, the whole family was going and I decided not to protest. Instead I used my strategy with which I approach going to church: I volunteered to be the first person to take my daughter out of the ring when she decided she'd had enough. 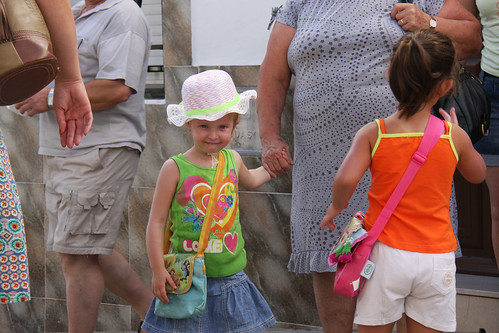 Of course you have to look your best when you go to a bullfight. 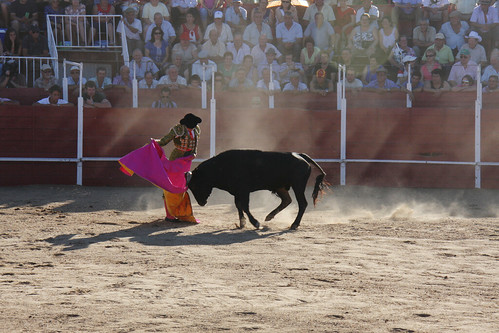 My favorite part of a bullfight is at the beginning when the bull is not yet injured and runs around very quickly. Being in the ring with a beast like that is definitely a show of bravery. 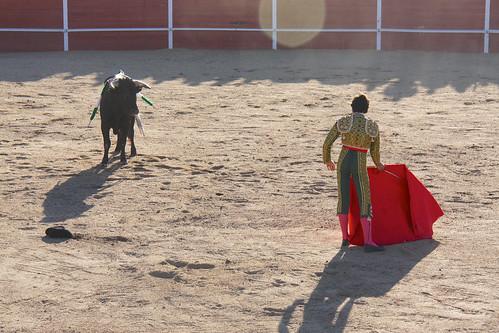 And I do love photographing bullfights. The action and the majesty are fun to capture. 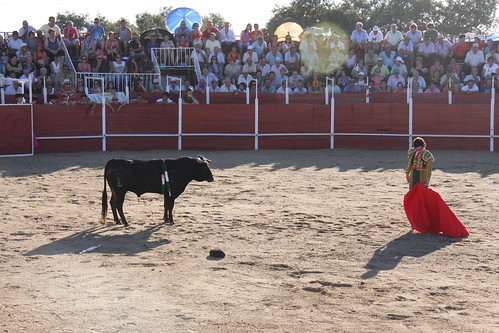 The engineering of the portable bullring, which can be loaded onto a truck and is all held together with pins, is very impressive.

Even before the first bull was released, Nora was put off by the cheering crowds and we moved to a spot near the exit. After about four shouts of ¡Olé! as the bull passed by the bullfighter, she made it clear that we had to leave, so my wife and I left the bullfight for a long, leisurely walk back towards town. 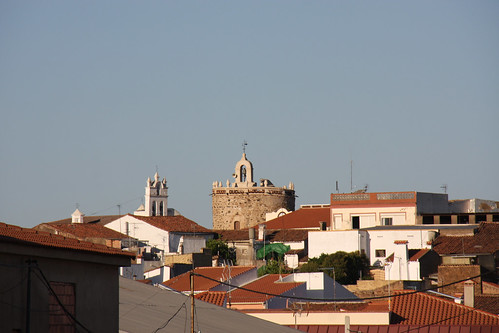 The church, as seen from the outskirts of town. Zahí­nos is so hilly, it makes San Francisco look like the Death Valley salt flats. 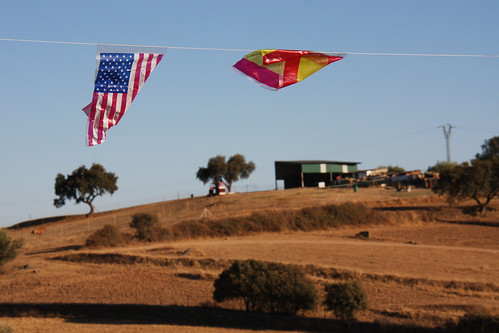 It's a Spanish tradition to put up flags of various nations as streamers around town during festivals. The juxtaposition of these two with the dry Extremadura terrain was too good not to photograph. 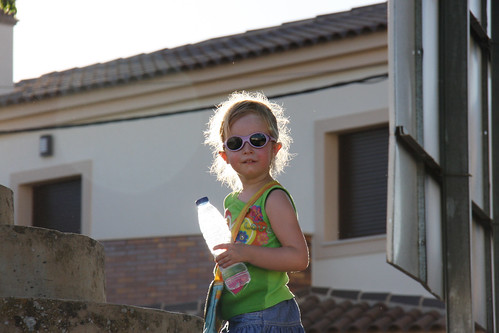 My blond angel has a halo.

The following morning, after a breakfast of coffee with goat's milk, we headed to Uncle íngel's farm, a common tradition during our visits. Nora, who went to see a zoo of exotic creatures and found the most delight in a goat licking her hand, was beside herself with the news that we were going to see goats. 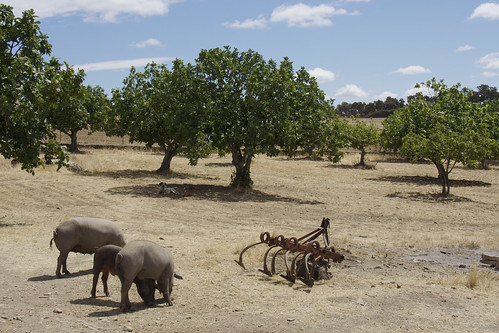 íngel's farm is the epitome of rural southern Spain: pigs for making homemade chorizo and morcilla, goats for milk, old rusty farm equipment, and a garden full of fresh vegetables and melons. 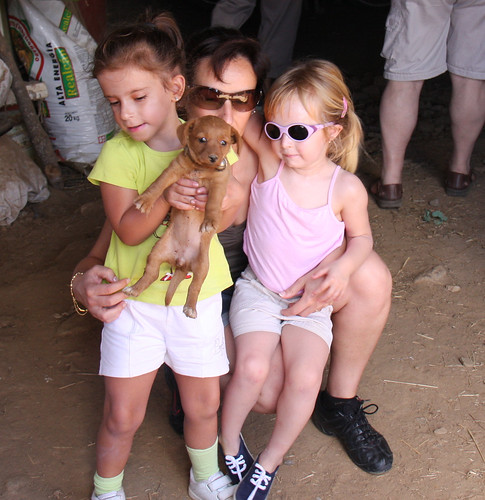 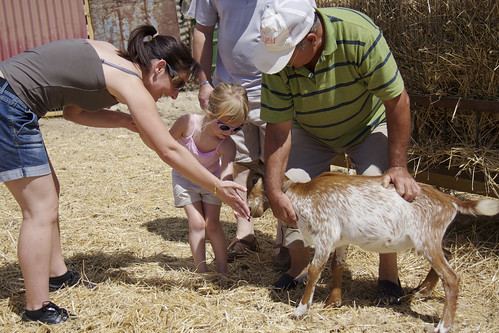 íngel holds a goat for Nora to touch. Goats are clever beasts, and they very quickly figured out that Nora didn't have anything of value to offer them. 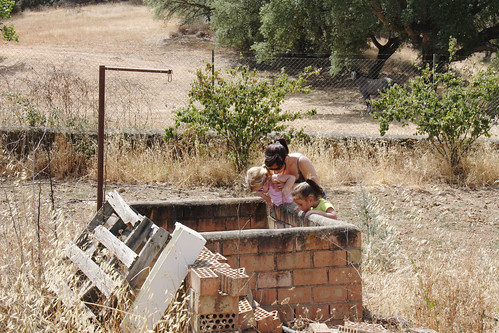 Looking down the well. 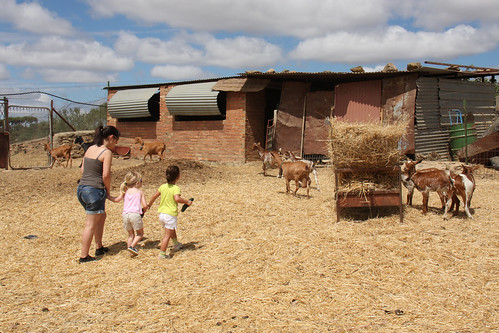 Heading back to the goats with some not-good-enough-for-human-consumption cucumbers to offer their caprine friends. 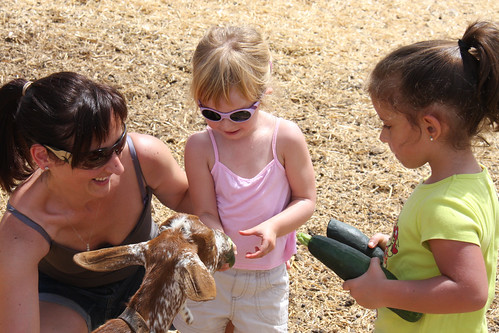 This went down a lot better with the goat. Surprisingly, Nora was less frightened of the animals than her cousin, who visits her grandfather's farm often. 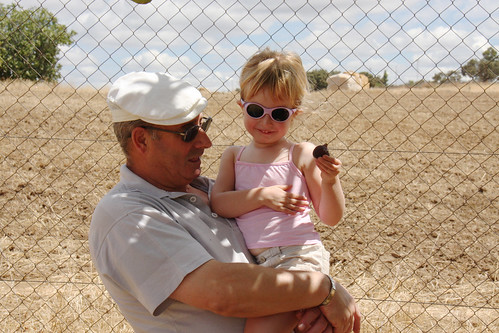 Then it was time to pick fresh figs off the trees. I'm generally not a big fig fan, but when you have to reach up and grab them, peel them and eat them out in the countryside, I could eat kilos of them. 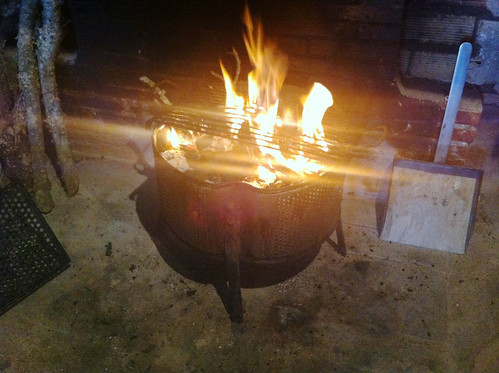 Back at home, íngel fired up the barbecue for lunch. My cousin-in-law-in-law (our wives are first cousins), Manolo, asked me if I recognized what the barbecue was made of. I didn't. He said, "It's the cylinder from a washing machine!" Sure enough, it was. And the tiny holes in the sides probably provided a lot of oxygen to the fire. Very clever!

After a nap, we went back to the fairgrounds for some typical fairground fun, but it was really windy and the temperature dropped to the point where we were uncomfortable even in our light jackets, so we didn't stay long. 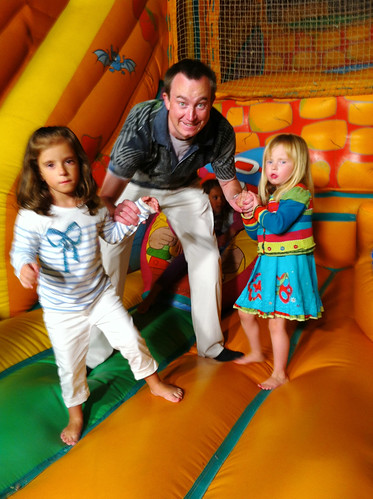 I did, however, get to climb up in the bouncy castle (Nora wouldn't go alone) to play like a small child for a bit. Being able to careen wildly and fall down without injurious consequences can be quite fun.

That night, Nora and Valle were seriously wound up and went late into the night dancing and generally being silly cute children. The following video was recorded at 1:30 AM. Most of what is said is Nora saying, "Now I'm going to show you [some letter or number]," followed by a feat of graceful athleticism. The look on her mother's face should indicate how much sense she was making. I mainly recorded it because I think it will be a precious memory for the two girls when they are older.

The following morning, we went to the municipal swimming pool for a dip. The temperature was back up and it felt wonderful to swim in the cool water. 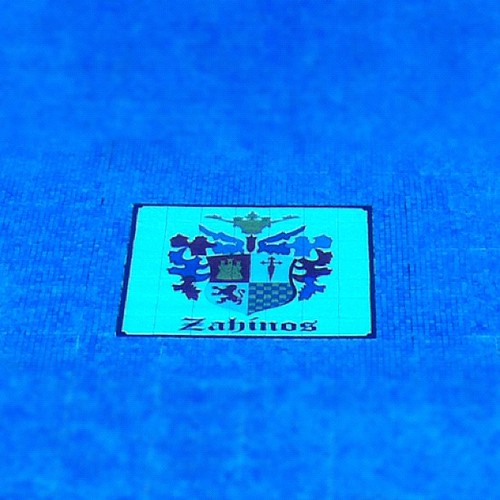 We had a great time in Zahí­nos. What I love most about Zahí­nos is that it feels incredibly authentic. There is zero tourism (no vacationing Spaniards, even), and when I'm there, I'm pretty much guaranteed to be the only foreigner for kilometers. Spending time with Ana, Manolo and Valle felt like spending time with my own aunts, uncles and cousins: it always comes as a surprise, for some reason, that these people you rarely ever talk to, are actually good friends and fun to be around.