On Friday, August 3rd, we drove south towards Madrid to attend the wedding of Emi and Mario. Emi and my wife, Marga, who is three days younger than Emi, have been friends since they were children. Emi is from the same Extremadura town as Marga's mother and grandmother, and Marga would spend most of her summer vacations in Extremadura with her grandparents, so they grew up together over the summers. Neither of them will forget the phone call when Marga told Emi, "I have some big news!", only to hear Emi respond, "Me too, you first!" Marga, who was worried she'd be the only one of her summer friends with a baby, told Emi that she was pregnant, and Emi exclaimed, "Me too!" Emi and Mario's daughter, Carla, was born only weeks after Nora. We checked into our room in Aranjuez, a town to the south of Madrid, got all prettied up, and drove back north 40 minutes to Getafe, where Emi and Mario live, to attend the wedding in their church. After the ceremony, all the attendees drove back down to Aranjuez for the dinner and wild-and-crazy dance party (attendees of my wedding will understand). 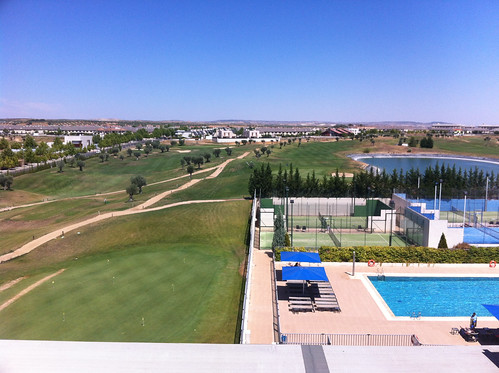 The view from our hotel. If we had had more leisure time, my wife and I would've loved to have spent more time in different areas of this photograph. 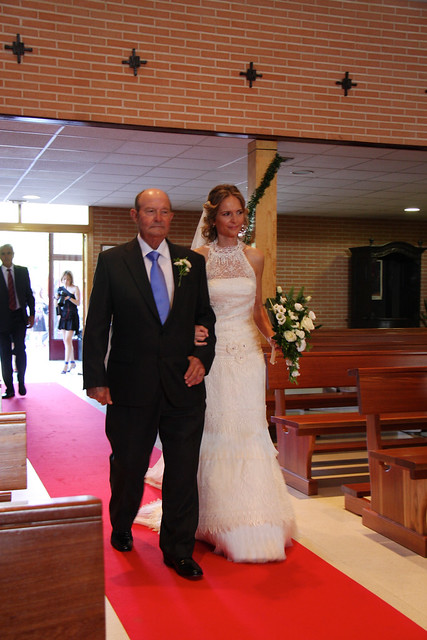 The bride with her father. Typically I can't tell one wedding dress from another, but even I was impressed by what a lovely dress she was wearing. As I recall, my bride also had one of these "hide the chest until after he says 'I do'" covers, too. 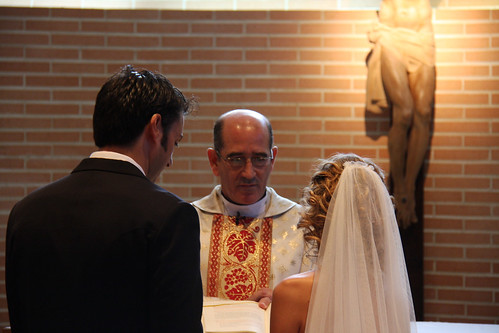 The ceremonies of Spanish Catholic weddings are exceedingly long and boring (again, attendees of my wedding will attest), and I usually spend my time admiring the gothic architecture, but this church was a more modern brick structure, so I was out of luck. 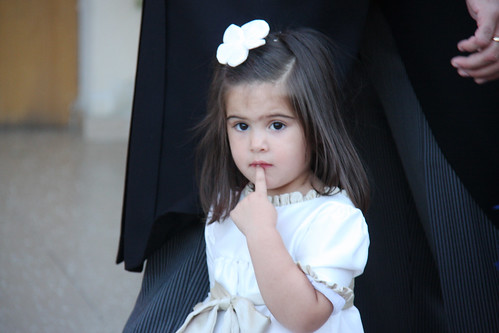 Carla wasn't sure what to make of it all. No doubt she will have enough photos around to form a memory of the event. 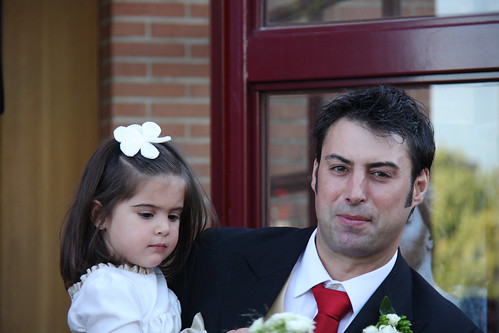 Carla was never happier than when she was in her daddy's arms. 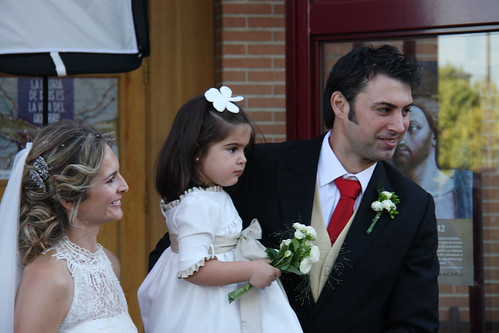 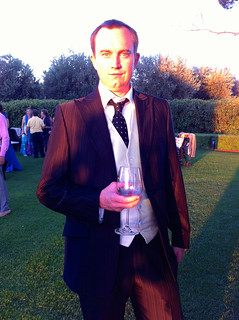 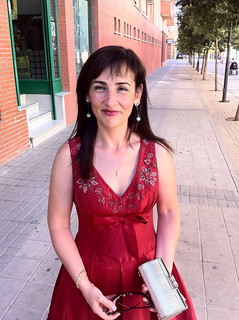 We clean up well. Marga was briefly concerned that she hadn't gone to a hairdresser that very day (as is Spanish custom), but afterwards, she was satisfied that she was just as guapí­sima as the other gals. For my part, I played my "You look gorgeous, but spend whatever money you like, dear" husband hand quite deftly. 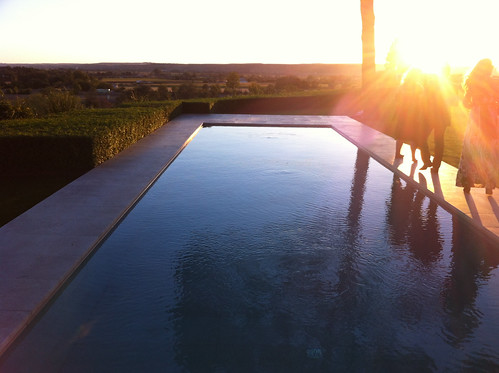 The rich-person's-home-turned-wedding-venue place (I think I heard talk of royalty) where they had the reception was spectacular, especially since we arrived twenty minutes before the 9:12 PM sunset. 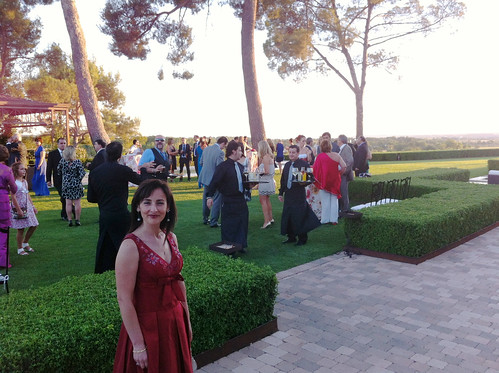 It only needed to be on a five-meter-high hill to have views for kilometers around the flat horizon. 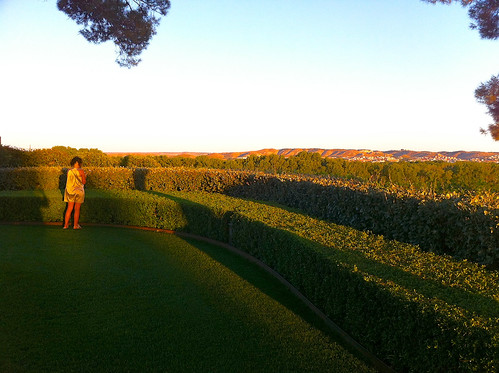 The grass was just begging to be romped in barefoot, a privilege reserved for the under-ten crowd. 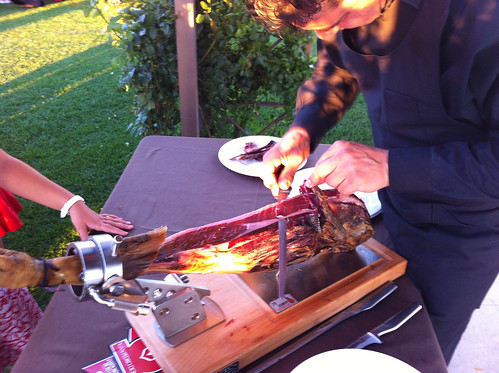 This is, of course, a Spanish wedding. It's absolutely true that the mouth pleasure of a slice of serrano ham is inversely proportional to its thickness. Cutting translucent slices is a professional skill. 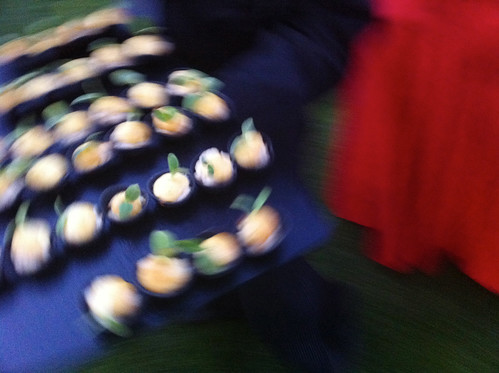 My very, very, very favorite part of Spanish weddings is the part where you wander around schmoozing with other guests as waiters pass by offering hors d'Å“uvres and bottomless wine glasses. Normally there are between three to six different snacks on offer, but for Emi and Mario's wedding, I swear – under inebriated oath – that there were at least twenty different hors d'Å“uvres. 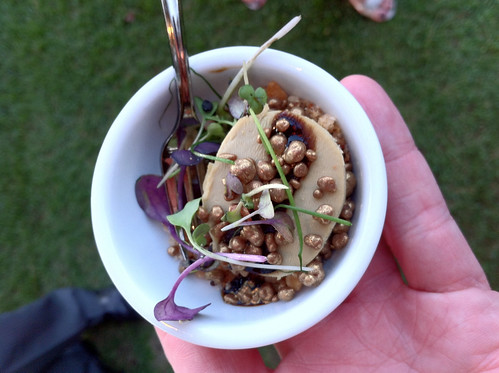 The only one that wasn't immediately snarfed down and intrigued me enough to photograph was this "pí¢té with golden pop rocks". Yes, you read correctly. What could be better than pí¢té? Duh! Pí¢té with explosions in your mouth! 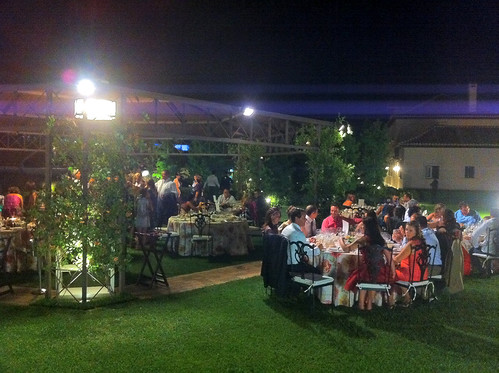 We were delighted to be dining outside. Initially we were disappointed that the wedding was an evening affair (i.e. fewer than 6 hours of dancing), but it became immediately clear that no one could bear being outside at lunchtime in Madrid in August. 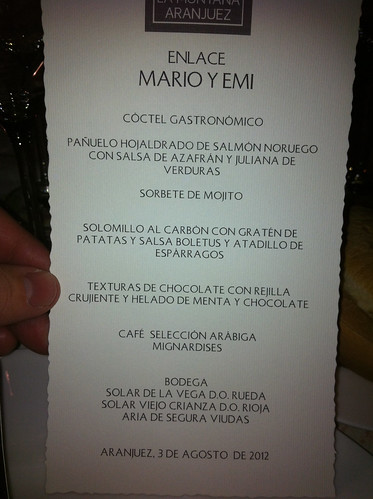 With our bellies full of hors d'Å“uvres, we all were wondering why we were sitting down to eat dinner, but the food was spectacular. The first course was a nordic salmon pie, and the second course was a sirloin steak. 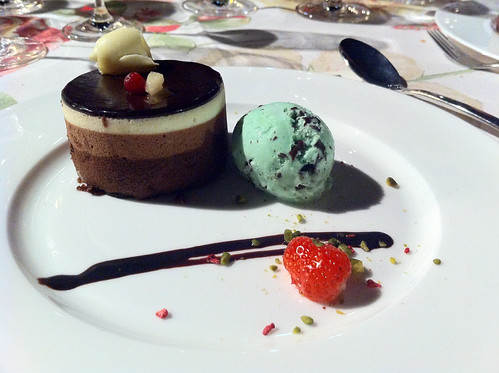 The dessert, which I, frustratingly, could barely touch, given that I was full up to my throat with amazing food. 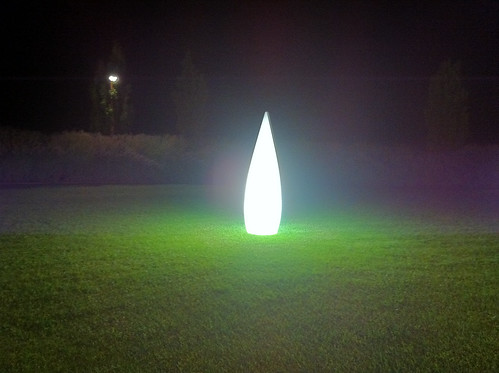 The lighting was awesome, too.

What followed was a manifestation of my two favorite Spanish words, barra libre.

Almost never are the two meanings of the English word "free" jumbled in Spanish, gratis (as in beer) and libre (as in speech), but this is one of the cases. It was a "free bar" in all senses. 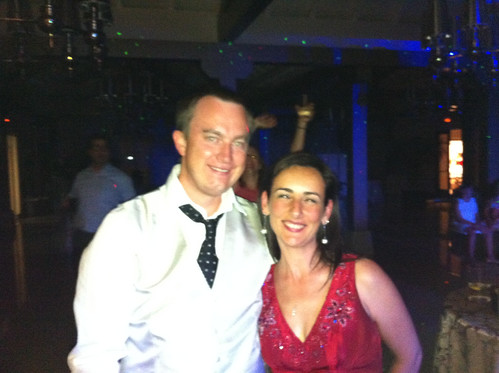 On Saturday, we got up, checked out and went out for breakfast – a spanish omelet, non-alcoholic beer, and about six liters of water – in the town of Aranjuez, which is gorgeous. After only a brief look around, it shot up our list of towns in Spain to visit as lazy tourists (and/or live in).

Unfortunately, we had to drive five hours south to Extremadura to see our baby, whom we hadn't seen in over a week.