On Saturday, my wife and I got to attend another live music performance at our favorite local sports bar, El Vapor. This time it was a classic rock cover band, Vermouth Band, billed as covering the works of The Eagles, America, Status Quo, Queen, The Police, Cat Stevens, Lynyrd Skynyrd, Kansas and ZZ Top. That's definitely my kind of tunes! Unlike the last band we went to see, this band was set up outside on the sidewalk. This being Cantabria, they had to stop playing for ten minutes once because of a light drizzle, but picked right back up when it subsided. As a member of the last band pointed out, doing cover songs is very challenging, because the brains in the audience are going to pick up any little variation from what you play and what is grooved into their memories from their favorite albums. Despite the difficulty, the band played very, very well. There were a few times when I thought the singer missed a note, but he could really belt out the high notes when he needed to. He was also full of energy, bouncing around and carrying on like he was playing to a packed stadium and not a café terrace with thirty people. I was impressed. 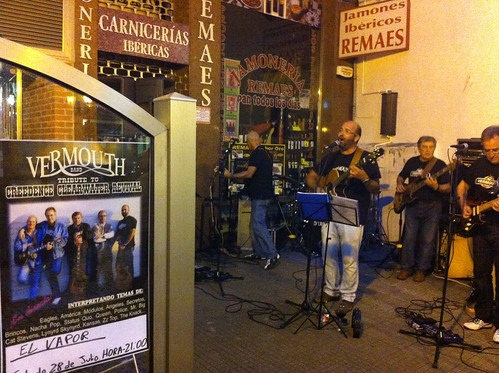 Unlike Lost In Covers, who enunciated so well that I more accurately learned some lyrics to songs I've been singing along to my entire life, the singer of Vermouth Band clearly does not speak English, and has learned more to mimic the sounds of the famous vocals rather than sing the real words. We all do this when we sing along to the radio in our cars, of course, but there were several songs where I know the lyrics verbatim (e.g. "They stab it with their steely knives, but the just can't kill the beast!") and he just mumbled noises – right on pitch, mind you – that sounded a bit like the words. No doubt the vast majority of their audiences, monolingual Spaniards, have no idea he's not singing the actual lyrics.

The other thing that impressed me was his ability to mimic the actual sound of the singers. When he sang Skynyrd, he threw in some yeehaw's, and when he did Queen, his mouth was open more widely and it sounded just like Freddie Mercury.

It was a fun night out, but I did make one mistake… I usually make a conscious effort to reward local businesses with revenue when I approve of their behavior, but I was so entertained by the band that I only had one drink.