I'm pleased to see that some of the local businesses where I live are starting to use Facebook properly to announce events and sales. I've recently subscribed to the updates of a local bar that sometimes hosts live performances. Usually this only results in knowledge of the concerts I'd like to see, but cannot go to because of my parental duties, but this weekend, my in-laws were visiting, and my wife and I escaped to go see a local cover band, called Lost In Covers. The band consists of Cholo and Isaí­as, who are members of a bigger band in Santander, called Lazy. Cholo is the sound technician, and plays bass guitar, lead guitar, and mandolin superbly. Isaí­as plays acoustic guitar and sings beautifully. Almost all the covers they play are in English, which Isaí­as speaks well and sings to perfection. The music and vocals were at just the right volume for the space we were in, which makes a big difference. In my opinion, their best songs were their two newest additions to their repertoire, An Englishman In New York, by Sting, and Yellow, by Coldplay. 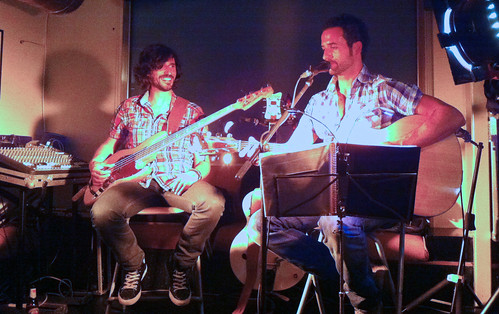 My wife confirmed that they're pretty easy on the eyes as well as the ears.

After their first set, I went to talk with them for a bit. I'm pretty sure I'm their first American fan, and they were very pleased to chat, even with the standard, "How long have you been playing?" sort of questions. I asked how many gigs they do a year, and they said that some months they only have one, but that this was their fourth gig this week, so it ebbs and flows. Then, as often happens, my wife asked the most insightful question, "How long does it take to prepare a new song?" Cholo explained that sometimes just running through it three times was enough to cement it in his mind, but that other times songs required more orchestration to pare it down from the full band version they are trying to mimic to just two instruments. Performing covers, especially very famous ones, is challenging because the audience already has very specific expectations for how each song should sound, but that sometimes you can shake things up by deciding to play softly for a part that should be loud or vice versa.

When we went back in for the second half of the show, they dedicated the first song, a Johnny Cash hit, to me, asking if Folsom Prison was near North Carolina. I shrugged in ignorance, but before they strummed the last chord, I had looked it up and learned that it's in California.

I hope we can find a babysitter next time they are in town.