State of the Offspring Address - June 2012

The most important thing to happen this month, besides my parents coming to visit, was a series of four visits to the dentist. The first visit was the worst by far, and once we secured the association between going to the dentist and getting to eat ice cream in the morning before lunch, Nora was actually asking when she could get to go to the dentist again. If you've ever been to a dentist, you'll know that they don't like to let you leave without securing your next visit, so we've got another one planned for July to do a checkup and make sure all her teeth are adjusting to their new composition. 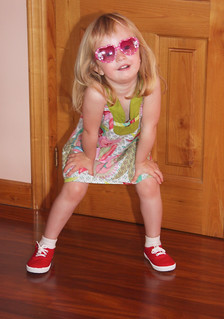 Nora has become quite adept at directing a discussion towards some goal she has. She often doesn't initiate a conversation with her immediate desire like she used to, but she attacks it at oblique rhetorical angles. For example, one morning she was very concerned that I didn't know where the ice cream was kept at the local candy shop. "Oh, Poppy, I have to show you!" I was up for a bit of a walk, so I agreed, but I knelt down as we were leaving and said, "We're not going to buy any ice cream today, but you can show me where it is and maybe we can buy one on Saturday, okay?" Visibly upset, she agreed. When we got to the store, I pretended to walk by it, and she caught me and pulled me in the direction of the door, ran inside and pointed out the freezer with the ice cream. I acted enlightened by this information, and she said, "We can only have ice cream when I go to the dentist, right?" I smiled and confirmed her astute observation. She followed it up with, "Since we're here, can I go play in the playground [across the street] for two minutes?" 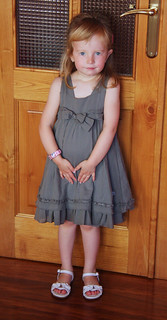 Another tactic that has become one of her favorite phrases this month is to pick up a toy, or really any object, and ask, "What do I need to do with this?" I've tried responding, "You don't need to do anything with it," but then she just repeats the question. What she wants is a combination of instruction and permission to play with whatever it is. It's subtle and manipulative, and it works very well.

One day this month, I was awakened, as I often am now, by Nora coming into my room to say "Good morning". She confirmed what I had vaguely heard, that she had already taken off her diaper and done pee-pee and flushed. The previous morning, when she had come in, and I had been exhausted, I allowed her to climb up into her mother's side of the bed and lie down with me. This day she did the same. I glanced at my 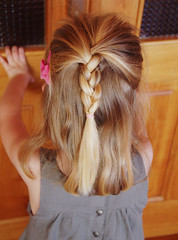 bedside table to my clock, only to remember that it was on loan to my wife after someone (okay, it was me!) dropped her alarm clock and broken the alarm function on it. There was plenty of sun outside the window, so I figured it must be about 8:00 or so (we usually get up between 8:30 and 9:30). I leaned over Nora to see my clock on my wife's side of the bed, only to discover that it said 6:30! My wife gets up between 6:00 and 6:15, so I assumed that she, being unfamiliar with the device, had accidentally, hours ago, flipped it to "time set" mode where the time was not advancing. I lay back down and noticed that Nora was already snoring. That was when I heard my wife downstairs

preparing to leave. It really was 6:30! I nudged Nora and told her that it was still nighttime and that she needed to go back to her bed. She looked at the window, back at me, to the window again, and back at me, before swallowing her objection that "No, Poppy, it's clearly not night time!" and let me lead her back to bed. She slept until 10:15! Bloody solstice.

Her counting is progressing steadily. We've made it to the word "eleventeen" phase, which every anglophone child passes through. She's currently perfecting her "in N minutes" and "for N minutes" phrases, when asking to do something for a short time. But if often comes out as, "Can I do X for three minutes and ten minutes and four minutes?" We're not seeing any recognition of a connection between the arabic numeral and the word for the digit.

We filled out and submitted her official application for school, which she will be starting in September some time. She's pretty excited about that. 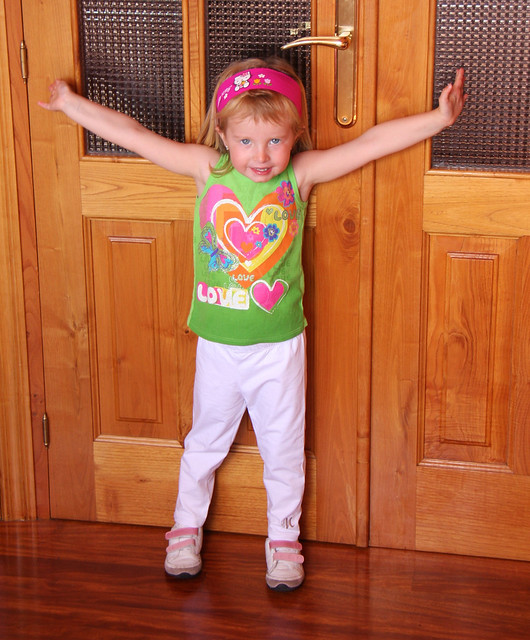