The town where I live is celebrating its annual San Juan festival this week. Most Spanish towns have a town saint, and for many of them, that role is filled by Saint John The Baptist. There are several things that I love about this festival. It amuses me that it's really just a thinly veiled version of the pagan bonfire solstice festivals held across Europe (the bonfire is to shoo away the witches, in case you didn't know).

Riffing off the Valencian falles tradition of building elaborate, yet explosive, parade floats to burn, the townspeople of Colindres also make little miniature floats, usually the size of small cars, which are wheeled, by hand, around town before finding their way to the designated place to be judged, doused in gasoline, and ignited. I've always been fascinated by people willing to put so much creative artistic effort into transient works, like sand castles or enormous floats with real flowers, that will only last as long as a cactus flower before withering away. But what I especially like about the work my fellow citizens do for San Juan is that each float is a political protest. Every float is made to represent some complaint that the citizens have about the way the mayor is running the town. For years people complained about not having a swimming pool, and the town hall built a swimming pool. Then people complained about not having an indoor swimming pool, and now construction on the indoor pool is almost complete.

I only got a photo of one float, which I saw parked outside a bar in town while its creators were getting festive inside. 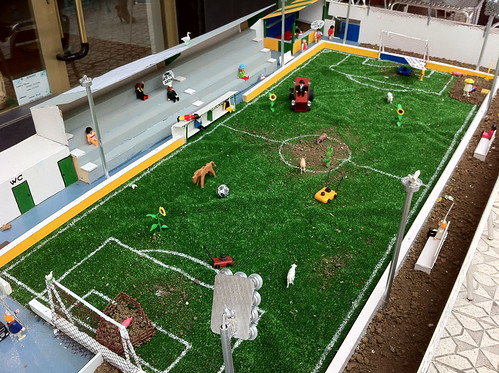 It is a startlingly accurate model of our local municipal soccer field, which I've never seen with any grass around the goals or in center field. They have represented this with pigs and a cactus in the bald spots. Another float was a very realistic portrayal of the town church and brickyard around it.

"The symbolism of extracting anger and worries into a physical object and then burning it in a big party has got to be healthy for a society on some level."
-Armchair Psychologist

Each group that makes a float also gives a speech to go along with it, and the speeches are rarely written in prose. They all rhyme; some are recited as poetry and others performed as songs, but they all carry serious political complaints. This method of using art to both entertain and complain is beautiful to me. The point is made without being harsh or mean, and, even better, the politicians seem to actually listen to the complaints. Fantastic!

Here are some children reading some rhyming complaints. Pardon the camera spin, but I wanted to show that hundreds of people were present.

Somehow the floats and presentations are judged, and best ones receive checks of between 200€ and 400€ (not bad!). The floats, upon which hours of thought and labor were spent, are thrown together in one big pile, doused in gasoline by a local firefighter, and the overall winner then gets to light the bonfire.

It also didn't hurt the general mood in the crowd that this event took place only an hour after Spain defeated France to make it to the semi-finals of the Euro2012 fíºtbol tournament. 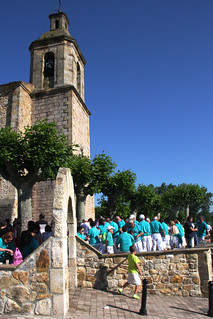 The following day, Sunday, the was a procession up to a special mass at our medieval church, the Iglesia de San Juan. The townsfolk were encouraged by the festival program to then have a picnic lunch by the church (bring your own food), but then there was a merienda provided free later in the afternoon. It was quite a sausagefest. There were women there, but the afternoon snack consisted of hotdogs.

One of my pet peeves about my adopted country is how they refer to hotdogs. Several times each year, I am annoyed by the fact that Spaniards refer to hotdogs and sausages with the same word: salchicha. I understand that technically a hotdog is a "frankfurter sausage", but "sausage", to me, means something a butcher makes with spices. A "hotdog" is just mystery meat made in some factory somewhere. I was looking forward to some sausage, but when I saw them opening up hundreds of packs of Oscar Meyer wieners, boiling them, and putting them in hotdog buns, I was quite disappointed. Nora enjoyed her hotdog, though. 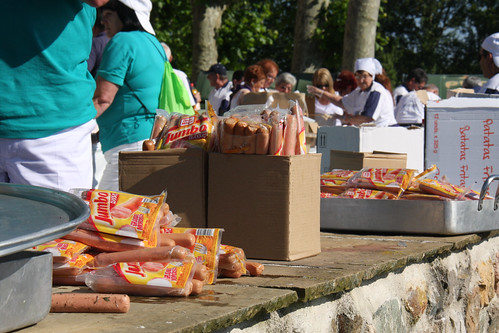 "My wiener has a first name…"

It was a wonderful weekend, with some very welcome summer weather. We very much enjoyed taking part in our town's festivities. 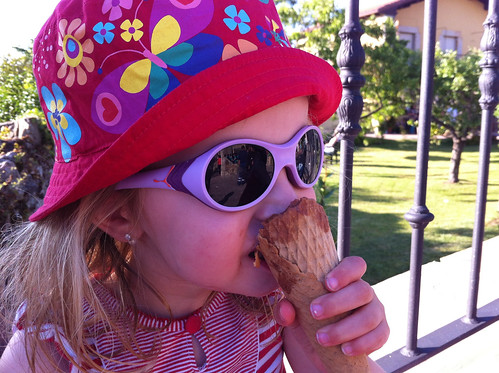