This morning, the children at the local school were having some sort of play day outside with events and competitions (those were the best days of school, weren't they?), and there was some pop music playing. When I was coming home with the daily groceries, there was a song playing by a group called El Sueño de Morfeo (the dream of Morpheus). The song playing was their most catchy, breakout song, Nunca Volverá. I found myself humming it as I put away the groceries, and I thought about how nice it was to see them, by complete chance, for the first time back in 2006. Every year for the annual San Juan (solstice) festivities in Colindres, the town hall springs for a live concert with free admission. This year, it was going to be some band that I had never heard of and I wasn't remotely interested. When my wife got home from work, she told me that she had heard that the band they had scheduled had to cancel at the last minute because of an emergency, and that somehow, they had found another band to perform that night: El Sueño de Morfeo!

Unfortunately, we didn't have a baby sitter, and my poor daughter, Nora, is not a fan of loud music or firecrackers or anything loud at all, really. But we thought we'd give the concert a shot anyway.

As soon as the intro music started for the warm-up act, Nora turned and ran – pulling her mother's hand – to the far wall of the park where the concert was to be held. We ended up having to leave. We went to sit outside a nearby bar for a beer, but then there were some fireworks, and Nora and I had to go inside the bar to escape the loud bangs. Timidly we came back out ten minutes later. The fireworks had been to announce the start of the main act, and we could hear some songs that we recognized.

Like wolves hunting prey, we made a wide circle around some buildings and approached the concert venue from the furthest point, coming to a place where Nora could stand to be without crying wildly. So we parked there, 200 meters from the stage, and my wife and I took turns going up to the stage to see the band. Due to the short notice and total lack of announcement, there were very few people at the concert. If it had been advertised properly, young people from neighboring towns would've crowded in.

El Sueño de Morfeo are good performers. The lead singer really fills the stage with her presence and they perform well. We had a very pleasant time at the concert. 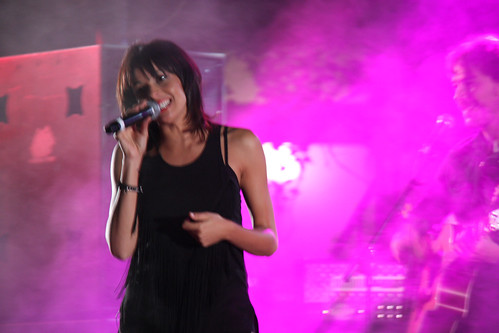 The lead vocalist, Raquel del Rosario, is incredibly sexy. At least I find her very attractive. 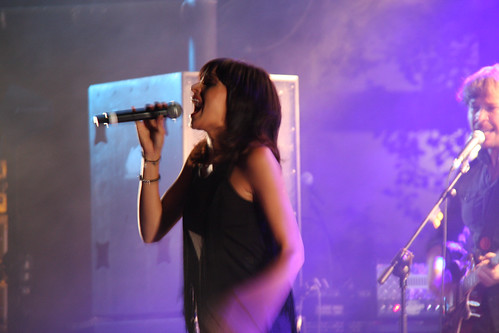 I think I drive too slowly for her tastes, though, as she is recently divorced from Formula One driver, Fernando Alonso. 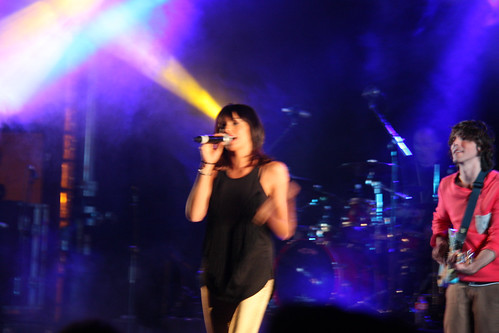 It took me several seconds to determine if she was actually wearing trousers or not. 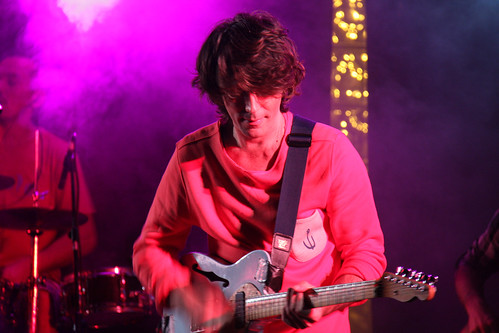 The lead guitarist has a floppy mop of hair. 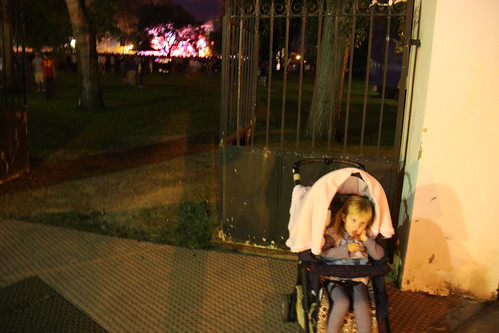 Taking my turn at 200 meters with Nora. 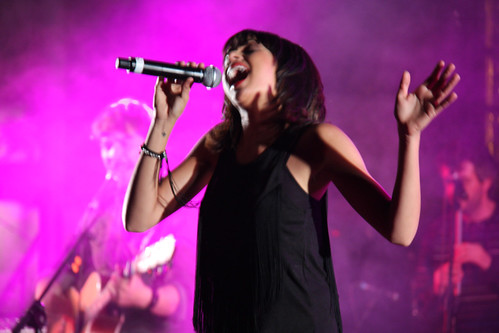 We had a lot of fun, despite having to take turns having it.

See if you can spot the song they're covering, in Spanish, here: