Capitalizing on Kindness: A Lucrative Proposal For Drive-Throughs

It has been over a decade since I went through a drive-through of any kind, but I have heard rumors of a strange phenomenon developing in the United States in which customers will randomly decide to pay for the order of the customer behind them. The colloquial verbal phrase for such random acts of kindness which cannot be easily returned is paying it forward. The drive-through kindness only works, of course, if there are two windows at the drive-through – the first to place your order, and the second to pay – and there is room for a car to have already passed the order window and still be behind another car at the pay window. I assume that the person paying, if they are feeling generous, inquires as to the amount of the order in the car behind, and then elects to go ahead and pay for that order too. Then, when the next customer gets their order, they are told that it was anonymously gifted to them by the car that just drove away, leaving them unable to pay back the favor. I have heard of cases in which each driver continues passing the kindness backwards in the drive through line for several cars. My friends that tell me about this happening to them use phrases like, "It made my day!"

This phenomenon truly produces a win-win-win situation. The benefactor, for very little money, gets a the pleasant sensation of doing something nice for someone (research shows this to be the only way to actually buy happiness); the recipient is pleasantly surprised by a present from a stranger; and the restaurant or coffee chain gets all the money in the transactions and two customers that will subconsciously relate their pleasant emotions with the restaurant's brand, making return business more likely.

The key to the pay it forward phenomenon is the displaced reciprocity.

It's this third consequence that I would like to explore. It seems to me that it would be very much in the interest of a company's shareholders for the company to encourage this sort of giving among its customers, thus raising the general public perception of the brand. How might a company go about incentivize such behavior?

What to do: Suggestion

The pay window could have a sign that reads "Have you done something nice today?" and shows the price of the order of the customer behind the current paying customer. I feel reasonably certain that this would drastically increase the likelihood of someone choosing to treat their fellow motorist. 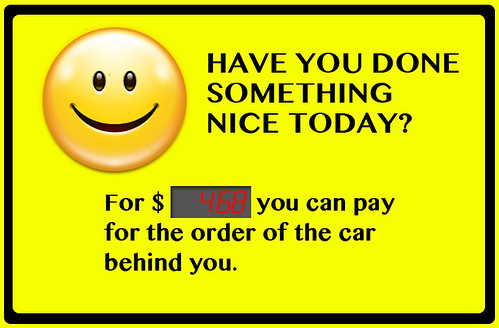 What not to do: Tracking

If the drive-through franchise already had a way of tracking customer purchases, such as membership card that got swiped with every order, it would be tempting to keep track of how much money each person spent on strangers and maybe display it as well to the customer in front of them, like "The customer behind you has spent $24.50 on strangers this year." While on the surface this might seem like a good idea and an even stronger motivation for someone to spurge on a stranger (both to provide reciprocity and also to raise one's own giving stats), everything I've learned about psychology tells me that this scheme would extinguish the behavior rather than promote it. If you pay it forward a few times, you will start to expect other people to do the same to you, and when they don't, you'll get angry and resentful, exactly the kinds of emotions the franchise does not want associated with their drive-through.

The key to the pay it forward phenomenon is the displaced reciprocity. If you expect something in return, you've missed the point.

The best way to turn money into happiness, once you reach a certain threshold of standard of living, is to spend it on other people. If you're a corporation, on the other hand, money is the end, not the means, and using psychological tricks such as I have outlined here will no doubt make a difference on the bottom line.