There are few things that makes you feel quite as terrible as a parent as seemingly allowing a part of your child's hygiene to deteriorate to the point of actually causing pain. We have known for some time that Nora has had some cavities in her molars, but it wasn't until she started complaining about tooth pain that we sought out the local pediatric dentist for an appointment. Nora went to her first inspection and was very good, opening her mouth, like a hippo, for the dentist. The dentist told us that she has cavities that require fillings in all four corners of her mouth, but that her left lower molars are particularly rotten, requiring some drilling, killing the nerve, and then a cap to replace the missing bit of tooth. Her first appointment, for the worst corner of her mouth, was this morning. Nora was so pleased with her behavior at the initial checkup that she was actually looking forward to going to the dentist. We got there a little early and had to wait for a bit in the waiting room, which was full of toys. When it was time to go in, I asked if Nora thought she could go in alone, as the dentist recommended, and she conveyed that she was very much against that idea. I went in with her and laid her down on the dentist chair/table thing, and they proceeded to put a blanket over her and then some netting to hold her down. It looked like enough restraints to hold Hannibal Lecter.

It's a bit of an understatement to say that Nora, who can't stand to ride in the car for five minutes because she can't stand being strapped in and immobilized for that long, was somewhat displeased. I held her hand for a bit, but the dentist wanted to tie her down so much that even her hands weren't free. The dentist, a pleasant enough Mexican woman, told me to stand on the other side of her if I was going to be there at all. I did, but Nora kept begging me with her eyes and words to let her out of the constraints that eventually I had to leave, because there was no way I could convince her that staying put was a good thing.

So I sat in the waiting room listening to her scream for Poppy, which she later, adapting to the Mexican dialect of the dentist, converted to papá. Frankly I'm surprised she didn't finish the 40 minutes of torture dental care completely hoarse, because she screamed the entire time. Several times I had to get up from my seat in the waiting room and go to the bathroom to wipe tears from my eyes and blow my nose. It took all my willpower to not rush into the dental examination room and fling the dentist against the wall and rescue my poor baby.

If you can stand it, here's an audio recording I made from outside the examination room.

When she was released, she came and hugged me more tightly than she ever has, clinging to me for a solid ten minutes while I spoke to the dentist, made her next appointment, and got the bill. The dentist recommended that we go buy an ice cream and then take some generic pain meds. I think she was referring to her patient and not to me. We bought some ice cream and went home to medicate, Nora with some children's tylenol, and I with a glass or three of Rioja. It took Nora no time at all to revert to a happy little tot, while I was still traumatized by what I had witnessed. Ever since, I have been praising Nora for her good behavior and bravery at the dentist, and I let her watch several episodes of Dora The Explorer, her current reward activity of choice. 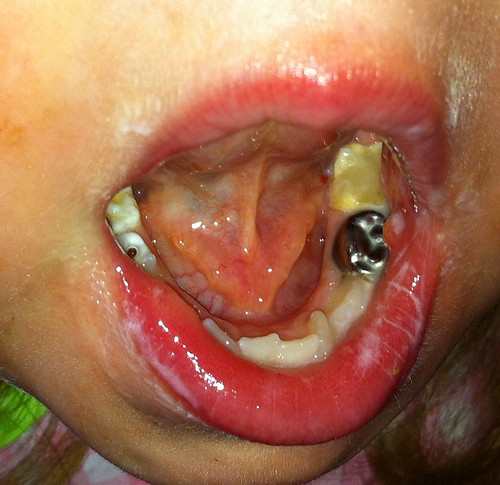 Ignore the white foam, as this was just after a toothbrushing. Note the black hole on the other side of her mouth and the horrible twisted nature of her bottom front teeth. The dentist said that Nora has particularly weak teeth.

Her local anesthesia has worn off already and she seems none the worse for her morning of dentistry. In the long run, until she reads this blog entry, she might not remember this event at all. All the better for her.

Even after all the emotional strife of today, I just want to say how thankful I am that I live in the first world and not only have access to top notch emergency dentistry when my child needs it, but that I have enough money in the bank so that I can afford it at a moment's notice. What a privilege.