State of the Offspring Address - May 2012

The big news this month is that Nora got one of the 21 spots in the three-year-olds program at the local school that we were hoping she would get into. When I say local, I mean that I can take ten paces out of my apartment building and touch the school. Needless to say, this will save all kinds of time and headaches that would normally be the result of having to drive her to and from a school every day. Of course it'll be a few years until she's old enough to walk there (i.e. cross one street) on her own, but we might have the zip-line installed from our sixth story apartment window before then. She's finally getting a grasp on the colors, demonstrating that she can distinguish wavelengths of light and categorize things that share the property of color. She likes to inquire about what color various items are. The other day, however, she stumped me with this one: "Poppy, what color is the mirror?" Whoa… 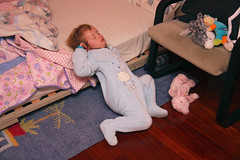 I once not-so-famously declared that "The monkey alarm doesn't have a snooze button." I was referring to there being no way to delay having to get up in the middle of the night to deal with a screaming baby. That is still the case, somewhat, as I have to get up on average about 1.5 times per night to spin Nora back around so she's sleeping the proper direction in her bed or calm her after a nightmare or find her teddy bear which has been brushed off onto the floor. When it comes to getting up in the morning, however, I have devised a bit of a snooze button. Normally she will get up and open the door to the master bedroom where I am sleeping – her mother having left for work hours before – and say whatever is on her mind. It's rarely "Good morning!" and is usually "Where is Mommy?" I greet her and give her two tasks, putting on her slippers (about 10% of the time she's already done that before entering) and go take of her diaper, put it in the trash, and then empty the rest of her bladder contents into the toilet. This can take up to four or five minutes to do if she gets distracted doing other things, and I can lie back down and wake up more slowly. 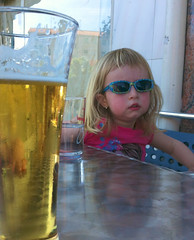 Sometimes I become so impressed by Nora's ability to reason through a problem or situation that I start attributing more intelligence to her than she really has. For example, she's quite good at thinking through a dependency tree such as "What do we need to do to get ready to go to daycare?" She can list putting toys away, brushing her teeth, putting on her coat, and turning off the lights. But she, like most normal three-year-olds, does not yet have a well developed Theory of Mind, an understanding that other people have feelings and beliefs and intentions just like she does.

One day last week she was in a pouty mood when we took our daily trip to the grocery store. In the store, she refused to say buenos dí­as to anybody. On the walk home, and later at home, our discussion about her behavior went like this:

Perhaps that was a bit cruel, but it was interesting to see the limits of her comprehension. Every day since, she has said buenos dí­as to our friends at the supermarket without fail. 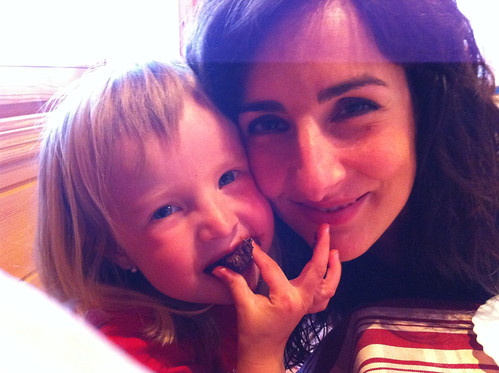 The only thing better than a chocolate bonbon is eating one with Mommy.

One of Nora's new favorite games is to take some object, like a ball or a bracelet, and hide it somewhere on her person, usually underneath her, if she's sitting, or behind her back or up her sleeve, and then ask "Where is [the object]??" What she wants is for her mark the other player to place great importance on finding said object and search around for it. Sometimes she will suggest that the search be moved to another room in the house. After the object can't be found, she whips it out and proclaims, "I found it! I found it!" I normally only have the stamina for about four or five rounds of this before losing interest. The key to stopping the game, I've discovered, is give no reaction whatsoever to her miraculous discovery. If you seem surprised by her reveal, even if you have refused to search, the game iterates again. 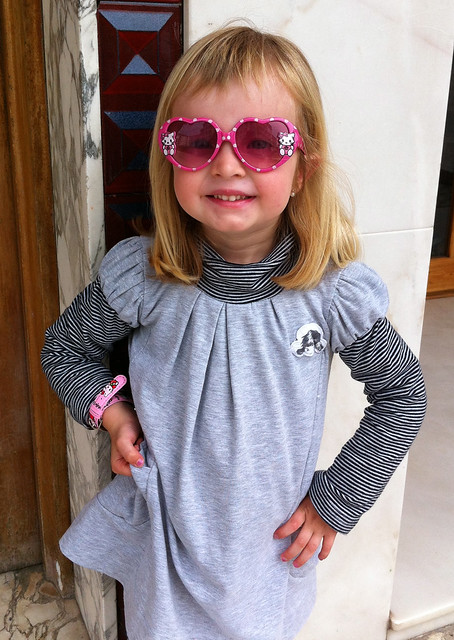