by erikrasmussen, on Flickr")Nora's language ability has veered mildly towards Spanish lately. For a while now she would only converse with me in English, but now she will sometimes switch to Spanish if she doesn't know how to say the phrase in English, or if she just forgets. I dutifully respond, "You mean, 'blah blah blah'?" translating what she just said into English, and she repeats it and goes acquiring new English words like this. 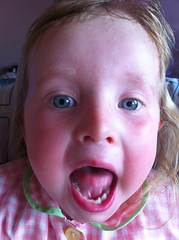 Her memory continues to astound me. Yesterday she was taking only very small bites of her lunch, and I told her to take bigger bites. She claimed that the bigger bites wouldn't entrar in her mouth, and I explained that yes, actually, they would. She opened her mouth wide as if to test my claim, and I took a photo to show her. After she closed it, she said, "I can open my mouth big like the hippos!" Surprised that she had made the connection, I inquired where she had seen hippos, and she responded matter-of-factly that she had seen hippos in Cabárceno. That was two months ago.

She also is full of stories that a more mature mind might not discuss, like today when we walked by a bar, she told me about one time when she and her aunt were stuck in the bar's bathroom and they couldn't open the door.

Three year olds should definitely be treated as social moles spying on their own families. We can no longer freely criticize people that we know from the privacy of our own homes because she's capable of parroting anything to anybody.

I recorded the following interview with her today to capture the state of her language skills. She will often go off onto tangents about things she experienced months ago. Her language for temporally positioning events is still pretty rudimentary, with "yesterday" meaning any time in the past.

The video starts with the end of her sentence, "What are you gonna do?" when she saw me setting up the camera.

We will know if she got in to the school near our house at the end of next week. After we finished filming, I gave her the camera to "take me a picture". 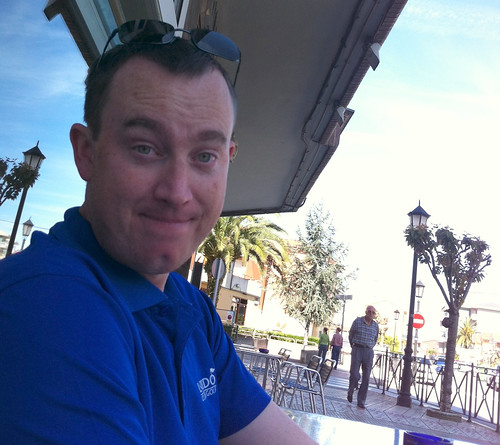