This weekend, I represented my local golf club of Laredo, of which I happen to be the reigning champion, in Cantabria's Clubs Without Courses championship. You may snicker at that, but golf courses in Spain are pretty scarce. Part of it has to do with the lack of popularity of the sport and the ingrained notion that it is a sport for the rich, and part of it is the strict land usage laws. Laredo won the very first Clubs Without Courses National Championship five years ago, and the two best players from the winning club from this weekend will go on to represent the region of Cantabria in the national championship in Córdoba. 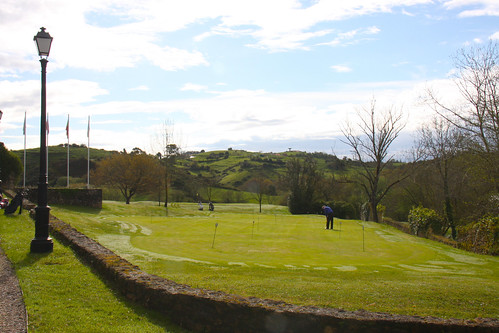 The practice putting green. The course was near the seaside tourist town of San Vicente la Barquera.

With my new handicap of 12, I was in the 13th of 22 threesomes on Saturday, so my tee time was 10:40. Even though the temperature was only about 15Â° C (59Â° F), the course was just so hilly that I was down to short sleeves after the first hole. All the golf I had played this year in the States was the lazy American kind where you sit on a cushioned seat and zoom right up to your ball, but this was Man vs. Wilderness Cantabrian golf, and I had to catch my breath before each shot. 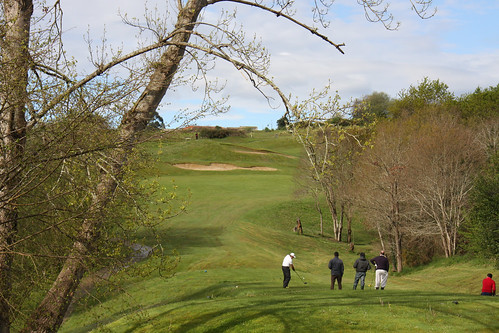 The first hole was a steep climb.

Very soon into the round the rain began. This meant donning an impermeable outer layer. I had specifically made a trip into Santander earlier in the week to buy some rain pants for this exact occurrence. It never really poured, but a mild drizzle was maintained for the rest of the round. My woolen felt golfing cap absorbed several pounds of water and had to be rung out several times. I had four spare gloves in a ziplock bag in my golf bag (I learned in Ireland that my golf bag is not water proof when my HD video camera stopped working and needed a $300 repair). It wasn't until the eighteenth hole that I had any problems with grip slippage. The only casualty of the rain was my scorecard. It was a disintegrating lump of pulp when we finished the round, but the scores of the guy I was keeping score for were barely legible, so we transferred them to dry card and turned it in.

Since there were eight local golf clubs competing against each other, it was possible to form the threesomes such that no one was playing with a member of their own team. My two playing partners on Saturday were an amicable pair. One guy thought he was a lot funnier than he really was. He's the kind of guy who, when we finished the round and the secretary took our scores, told us that they would send everyone an SMS to tell us our tee time the following day, and said, "Okay, give me your mobile," obviously asking for his phone number, he said, "But if I give you my mobile [phone] how can you send me a message?" She had to ask three more times to nail the syntax of "Please tell me the number assigned to your mobile phone," such that he couldn't escape into jokester-land. Exhausting.

He did, however, tell me a lovely story about how he was invited to the inaugural day of the course we were playing, which was designed by none other than Cantabria's golfing son, Severiano Ballesteros. During his round, he saw Seve playing another hole and went up to talk to him. He said that Seve was kind enough to stop and chat for a few minutes and have his picture taken. He was a great man. May 7, a week from the date of this post, will be the first anniversary of his death. 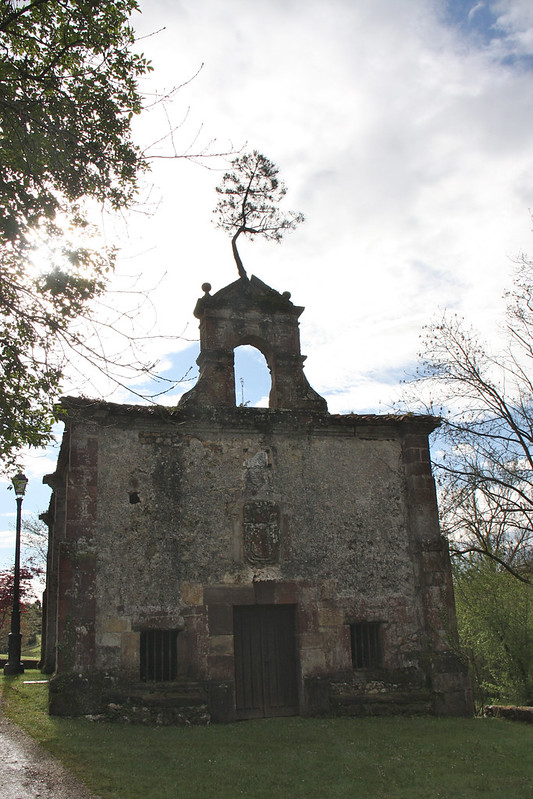 We were playing at Santa Marina Golf Club, which was built near this 19th century chapel, which curiously has a tree growing from its bell tower. You can't build anything in Spain without it being near some stone relic from another time.

I was very happy with my play on Saturday, especially my back nine that started with a string of eight bogeys. The eighteenth hole might be the hardest hole of golf I've ever played. It's a par 5, but I never managed less than 8 strokes.

The rules of the tournament were that only the six best rounds (gross, no handicaps) from each team would be counted. The team from Laredo had a final score on Saturday of 519, an average of 86.5, which included my 93. The next closest team on the leader board had 520, but that was with only five players (an average of 104), so it didn't count. The actual second place team was 36 strokes behind us with a 555.

Sunday was gorgeous and sunny…but very, very muddy. There was what the golf rulebook calls "standing water" on every square centimeter of the course. I made a slop-slop-slop sound as I walked up and down the steep inclines. If you didn't visually identify the square meter where your ball landed in the fairway, it was a lost ball, because they plugged down into the mud such that just a tiny square centimeter of the ball was visible. Every single player on our team scored worse the second sunny day than on the first rainy day. That should give an indication of just how difficult an already nearly-impossible course was playing. One guy playing in a pair of wellies looked ridiculous on the first tee, but like a genius on the eighteenth green.

On Sunday I witnessed an event that would definitely win the storytelling competition my golfing group has every year in February. My threesome had finished a hole and was walking to the next tee when we saw a heavy set gentleman from the group in front of us returning to the tee with his driver. His ball had missed the fairway by a couple meters and had plugged into the ground and been declared lost. He teed up his ball and sent it slicing off into the woods. He shouted some Spanish curses about defecating on the mother of the ball he just hit and flung his driver with all his might. His intent was probably to fling it straight down the hole towards the fairway, but he held on to it a split second too long and it went careening over our heads and up to the very tip top of a tree, where it lodged itself securely. We tried shaking the tree vigorously, but the driver wasn't going anywhere. This was a pretty serious situation, since a driver costs easily $300, which is probably 300€ (400 USD), if golf clubs are priced like other consumer goods. One guy from our group had the idea to use his golf ball retriever, a telescoping tube used to pull golf balls out of water hazards. He extended it out about 6 meters (20 feet), but it was still way too short. I suggested we could throw some rocks, but really I was imagining it either staying there forever or having to hire a cherry picker to fetch it. Just then, the other guy from my group, who was in his late forties or early fifties, jumped up into the tree, which didn't look at all conducive to climbing, and promptly climbed about 25 feet into the air with the agility of a chimpanzee and grabbed the club. And somehow he made it back down without breaking his neck. Just then it made sense how he could only take the club back until it was perpendicular to the ground and whip it through the ball and hit it further than I can with a full swing. Amazing. 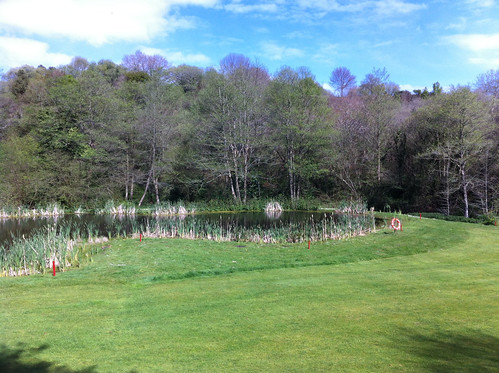 Every time I golf in Spain, I am amused by the fact that there is some law that requires them to put life preservers near the big water hazards. It's a practice that strattles the line between reasonableness and silliness. I wonder how many golfers drown every year in water hazards in the US. If it's more than 0.3, I'd be surprised.

The starter (the guy who stands on the first tee and controls who begins when) told us a story of one member of the club that plays golf in shorts, even in the near-freezing winter temperatures. When asked why, he replies, "When I wear pants, my wife gets so mad at me for how dirty I've gotten them, that I'd rather play in shorts." 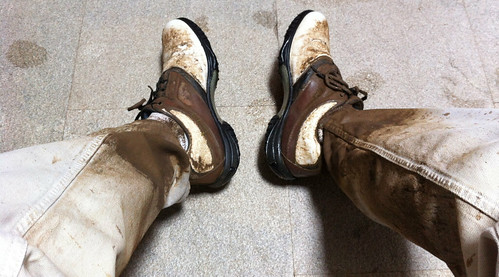 When I showed my wife this photo, she reenacted the shorts-wearer's story, telling me that I had ruined those trousers. Surprisingly, however, they came out of the washing machine looking like new.

I shot a 93 the first day and a 95 the second. The tournament officials didn't bother to properly add up the scores before declaring Laredo the winner. It wasn't even close. 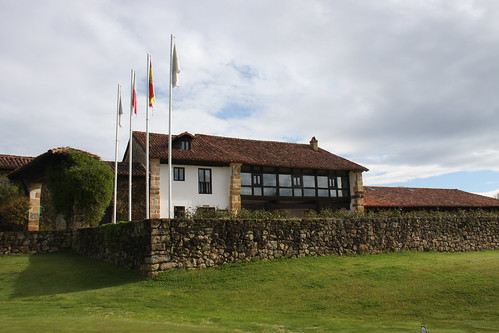 The best part of the course was the clubhouse, an old wooden structure that, as is common for golf courses everywhere, used to be the house that the owners of the land lived in. The greens were in a pretty bad state of disrepair. Apparently the club is running out of money because there's a lack of members. And I can understand why. Who would want to pay money to be abused like that every time you play? The course is just too hard. They've tried to make it easier by getting rid of all out-of-bounds and replacing the white stakes with red stakes, marking forests as "lateral water hazards", but it's not good enough. Santa Marina Golf Club seems to be in a downward spiral where the course is so hard that they are running out of members and money, which in turn makes the course even harder as it falls into disrepair. It's a shame, because the location is visually spectacular, with views from the sea to the snowy Picos de Europa with rolling hills and luxury chalets in between. 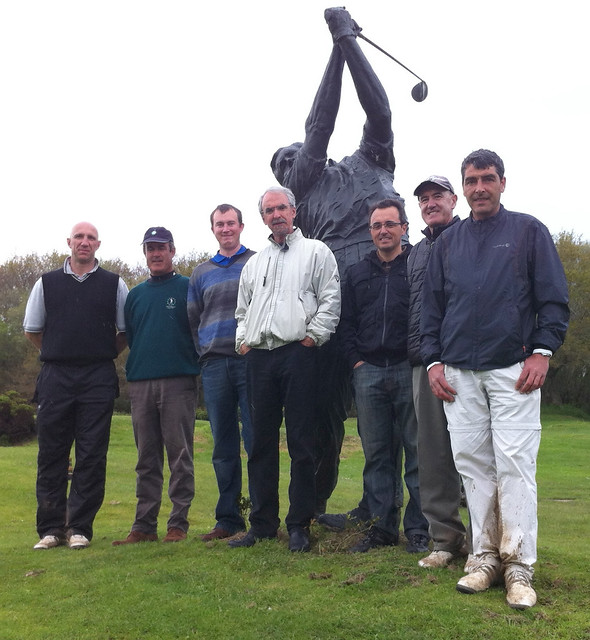 Laredo Club de Golf, the best golfers in Cantabria who don't have a home course. That's a bronze Ballesteros behind us.