Why do pilots tell the passengers about the wind? 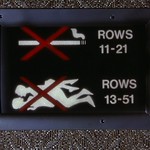 Have you ever noticed how, on a commercial airline flight, the pilot always – without fail – informs the passengers of the speed and direction of the wind at the destination? I can understand telling us about the local time, temperature, and general weather (e.g. foggy, sunny, raining) at the destination. That's useful information about how much clothing to don before exiting the aircraft. I also comprehend that it is absolutely paramount that the pilot know the direction and speed of the wind at the destination airport, since that determines what runway will be used, and what techniques to use for landing. Sometimes the pilot doesn't even convert the speed to miles per hour, but reports it in knots. Great, thanks.

What passenger really cares whether the wind is coming out of the north or south? Maybe once in a hundred thousand flights one of the first class snobs is planning on having his driver take him from the airport directly to the marina where he will be taking his ketch for a sail that afternoon, and, with this handy wind data he can start planning his tacking course. But most of the time, all the first class folks want to do when landing in Madrid is find car hire in Spain at the Hertz desk, or via carhirespain.net for cheap car hire in Spain.

My hypothesis is that the pilots receive a transmission with all the weather data, and rather than consider its utility to their audience, they just read the whole thing out to us verbatim. The practice amuses me every time I fly.

And now you will be unable to ignore it, too.