State of the Offspring Address - March 2012

It looks like Nora might finally be distinguishing wavelengths of light with her visual cortex. Several times this month, she has proclaimed that "That [object over there] is pink!" and been correct about it. And she spends a lot of time pointing at things and asking "What color is this?", but beyond pink she seems unable or unwilling to acknowledge that a green ball and a green shirt have anything in common. Oh well. One of her favorite things to do is to make up funny sounding words. She will often come up to me and say, "You're a fifilomdo!", which is often followed by a proclamation that she is not a fifilomdo, but a fifilomda, properly changing the gender of the made up noun following Spanish grammar rules. Once after our visit to the zoo, she declared that "Poppy is a hippo, and I am a hippa!" Indeed. 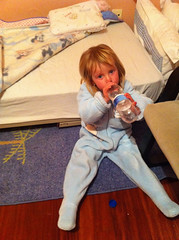 Once this month, rather than open my door and say, "Poppy, I want to go downstairs have have some juice," as she usually initiates our waking days, I woke up on my own and heard a BRAAAACK sound, like velcro being ripped apart, from the bathroom. Then it happened again, BRAAACK. I guessed what it was, and peeked in to confirm. She had managed to take off her blue outer pajamas (used to keep her warm when she inevitably kicks off her blankets) all by herself, and was undoing her diaper (the sound I'd heard) by herself, and was already up on the potty relieving her bladder. I was so proud and showered her with praise. This was especially nice since it came after a series of mornings where she would wake up crying and demand that all operations I described above be done for her while she sobbed. She has done this several times this month. 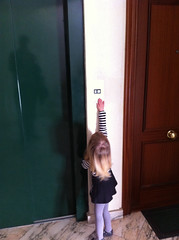 Nora continues to grow at a pace that can only be detected by her shrinking clothes and ability to reach things she previously was unable to reach. She can now easily see over tables and counters and sinks that were previously at forehead level. She can't quite reach the button for the elevator yet, although I make her try once a week.

One aspect of parenting that I suspect will only get more and more interesting over the coming years is noticing what my daughter's peers think is important and how she expresses these concerns to me. For instance, she is all the time performing some physical action and then announcing proudly, "I know how to do this, but you don't know how to do this!" Often these actions consist of some way of twisting her hands together or a bizarre walk or a facial expression. At her daycare she is now the senior class and 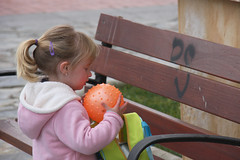 she and her classmates possess a physical agility and strength that is orders of magnitude above the drooling babies they are around. I'm convinced that they spend a great deal of time inventing new movements and sounds and expressions to one-up both their peers and the underclassmen half their age. The funniest episode of this was when she flicked her long blond locks like the women in shampoo commercials do and declared that "Poppy doesn't know how to do this!" She's got me there.

One day this month, when her mother went to get Nora from daycare, they had the following conversation:

Such a vivid imagination! When I told the daycare workers, they laughed at her creativity.

The other day, Nora announced that she had to go do pee-pee, so she headed off towards the bathroom. I asked if she needed any help, and she said, "No," and continued into the bathroom. She came out immediately, however, and walked over to me and said, "Thank you for asking!" before running back to do her business.

Today, when I was walking with Nora around town, we had to take a particularly narrow sidewalk beside a road where the cars go pretty fast, so I moved around to take her other hand so I would be the one on the side of the sidewalk adjacent to the road. Nora said the following:

Poppy, why did you move to that side? So Nora doesn't fall down into the road and get hit by a car? If that happened, you would be very sad because you wouldn't have Nora anymore, and then Mommy would come home from work and you would have to tell her that I went away. And you'd have to buy another Nora.

I told her she was right, but that it would be impossible to buy another Nora, and gave her a big hug. 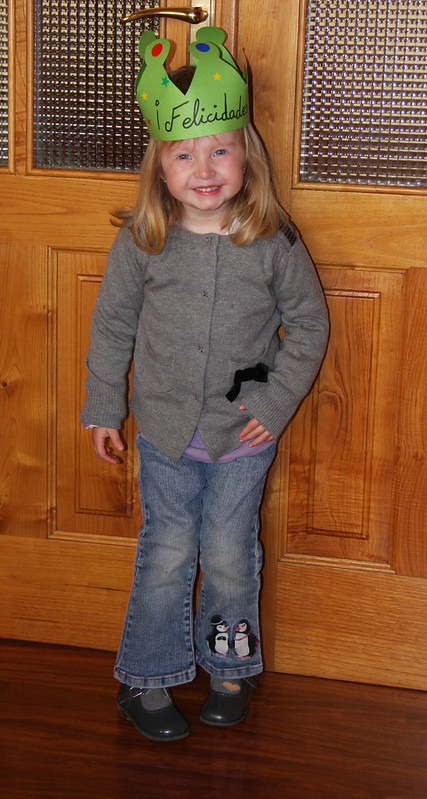