State of the Offspring Address - February 2012

This month has been marked most prominently by Carnival, in which Nora dressed up at daycare as a dwarf (a la Snow White), and then later as an Andalusian lass. Overall she's been much more of a pleasure to be around, listening to reason and telling interesting accounts of events.

Under my care, she has had a total of zero bladder or bowel control issues. I haven't had to change a single wet pair of panties this month, with the solitary exception of the night when I forgot to put her nocturnal diapers on, and we had a little 4:00 AM wetness to deal with. I'd hate to jinx it, but if feels like we've crossed a milestone.

Nora loves stories and books, and being read to is her favorite activity when at home with an adult.

One day this month, I was tasked with every husband's favorite chore: buying feminine sanitary towels from the local grocery store. Nora saw me take a packet off the shelf, and immediately asked, "Why does Mommy wear this diapers in her panties sometimes?" Jeez! I wasn't expecting to have That Talk quite so soon. I irresponsibly blew her off with a "I dunno, ask your mother," the old parental snooze button. This girl doesn't know her numbers, colors or letters, but it's like living with Sherlock Holmes, she's so observant! 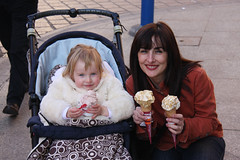 Several times this month, Nora has told me, "Poppy, you no can do this!", and she flings her golden locks with her hand as if she's in a shampoo commercial. It's pretty cute.

One morning, she woke up and was a bit groggy. I asked if she was still asleep, and she responded that she wanted to sleep in her stroller. I explained that it was beds that were for sleeping. In less than a second, she came back with "Strollers, too!" Touché. I was expecting to get through the first three years before I started losing arguments. 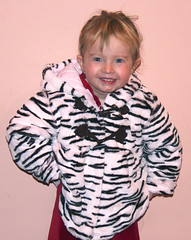 Every day recently, Nora demands to be "read" – though no books are needed anymore – the story of Little Red Riding Hood. As soon as the storyteller finishes, she demands that it be told again. Her Spanish grandmother is very accommodating and will gladly tell it over and over to her. Of course, any time information is copied over and over again imperfectly, natural selection can occur. I'm amused that my mother-in-law's telling of the classic Grimm Brothers' tale includes a memetic mutation I introduced: that the grandmother in the story is sick because she went outside without a coat on. In general, Nora loves stories and books, and being read to is her favorite activity when at home with an adult.

It\'s like living with Sherlock Holmes, she\'s so observant!

One day we entered the local hardware store, and Nora immediately pointed to the wall full of power tools, like drills and jigsaws, and she said, "Those make a lot of noise. I don't like that." It's true. Whenever she sees me go to our storage closet where I keep the drill, she says, "Poppy, don't make a lot of noise!" Whenever I did have to use the drill this month to install some lights in our bathrooms, she insisted on being as far away as possible with all the doors closed in between us. She said, "I'm going to close the door so that I don't cry." Also in the hardware store, she saw a sewing machine and proudly proclaimed, "Abuela has one like that!" Her ability to generalize concepts and recognize new instances of objects in a similar category continues to amaze me. 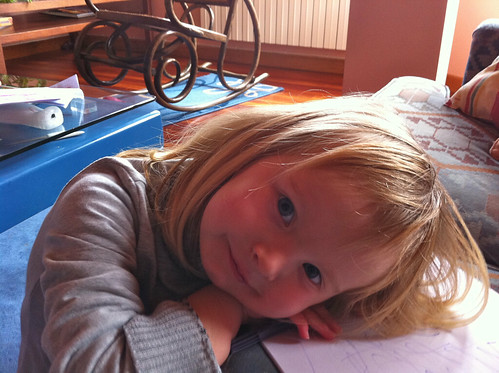