I wonder where that plane is going

I've had my iPhone 4 for almost two years now, and it's been at least six months since an app has really wowed me. The last one was surely Word Lens, the app that lets you point your phone at some foreign text, and it translates it right there on the screen for you. Okay, to be honest, Word Lens is quite a bit more technologically mind-blowing than the app I'm about to tell you about, but it's been a while since I've pulled anyone over to say, "Hey, look what my phone can do!" For me, there's always been a bit of a disconnect between seeing a dot in the sky leaving a contrail and actually flying in commercial airliner. Cognitively, I understand that the plane I see leaving the contrail is full of people and flight attendants and luggage and pretzels, but I've rarely ever asked myself, "Hmmm, I wonder where that plane is coming from and going to?"

I have known for some time that the location of every commercial aircraft is known more or less in realtime and the information is publicly available via either the airline or a government database somewhere. However, I've never had much of a need for this information.

Then, someone came along and realized how to best present this data. Your modern smartphone, after all, knows its latitude, longitude, angle relative to the Earth's magnetic field, and angle relative to the Earth's gravitational field. So if it also knows the location of any other object, be it a star or a friend or a train station, it can calculate, using fairly simple geometry, when you are pointing the phone in the direction of that object.

Presenting Plane Finder AR (the AR stands for Augmented Reality). For $2.99, you can point your phone at any airplane you see in the sky and it will tell you the airline, the flight number, the city of origin, the destination, the distance from you, and the current velocity. With only a dozen uses, I have gotten well over three dollars worth of enjoyment out of the app.

Most of the planes that fly over me here in northern Spain are going from southern Spain to the UK, usually with Ryanair, but occasionally I'll see one going from Florence, Italy, to Atlanta, Georgia, or from Barcelona to New York City. Although this information is really quite useless to me, it really is an awful lot of geeky fun. 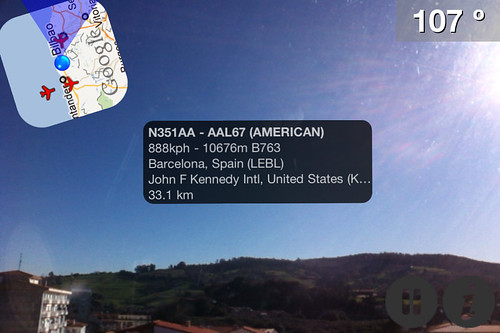 A shot from my living room window. The plane is behind the black box.