Today was the big Carnival parade, sort of a "Halloween meets Mardi Gras" thing that is very typical for children in Spanish culture. Apparently I did such a fine job last year that my presence was simply assumed as The Official Daycare Photographer. Perhaps in honor of that job, I was also given a leading role in this year's costume theme. About a month ago, I was told by Adela, the daycare owner, that this year for Carnival the kids would be dressed up as dwarves, the daycare employees would all be dressed as Snow White, Adela herself would be the Evil Stepmother, and I, the only parent with a themed costume, would be dressed as none other than Prince Charming. Either I misunderstood the "only parent with a themed costume" part, or it was later deemed a bad idea, but the other parents had dwarf costumes as well, including hats and beards and rosy cheeks.

Last night, when I was putting Nora into her pajamas, I was hyping today's parade, telling her that we were going to get up early to go to daycare and put on costumes and parade around town. She was very excited, but then she blew my mind. She said, "You're not going to leave, right? When we went to see the Belén, you took pictures and left, and I cried." The accuracy of her long term memory, and emotional sensitivity, continues to amaze me. I told her that no, I wouldn't leave, and that we would come home for lunch afterwards, but that, after lunch, she had to go to daycare while I worked like normal. She agreed.

All 207 of my photos are available in this Flickr set. Another parent urged me to also create a Flickr group that he can add to, so I've created Carnaval en Colindres for that purpose. To heck with the Spanish law prohibiting the unauthorized publication of photos of children. No one seemed to mind last year. 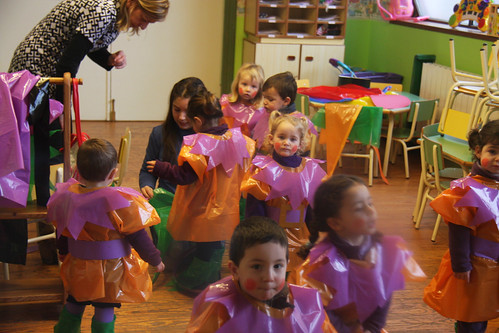 Things were pretty hectic getting about forty kids into plastic costumes, but the daycare workers managed admirably. 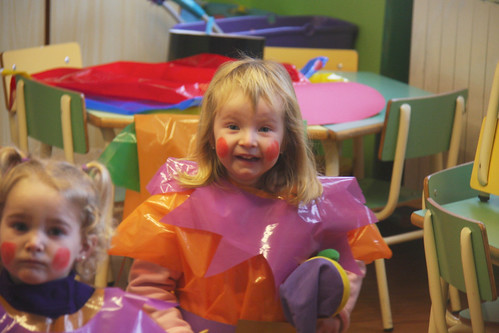 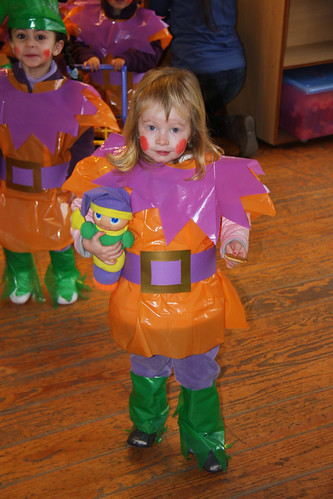 Her favorite comfort toy that she demands every day upon being dropped off is this little worm that lights up when you hug it, called Gusiluz. 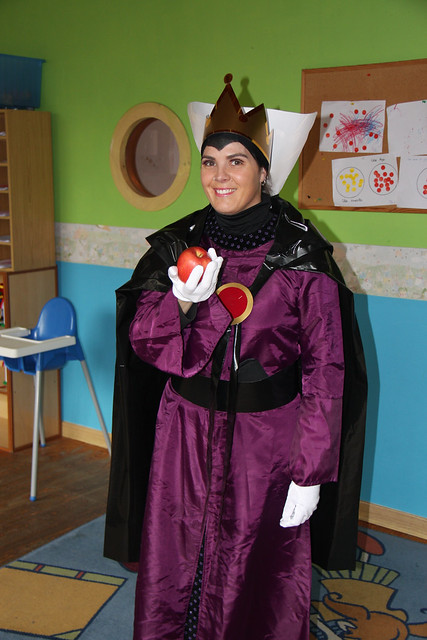 Adela, the daycare boss, as the evil stepmother. She said she would've carried around a hand mirror as well, but she needed a free hand. 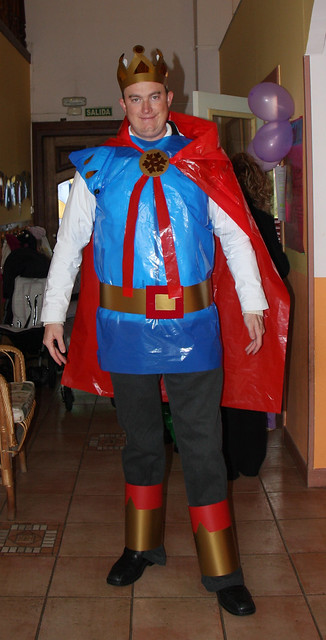 Yours truly, Prince Charming. It's tricky designing a costume that can be worn on the outside of a bulky winter coat. 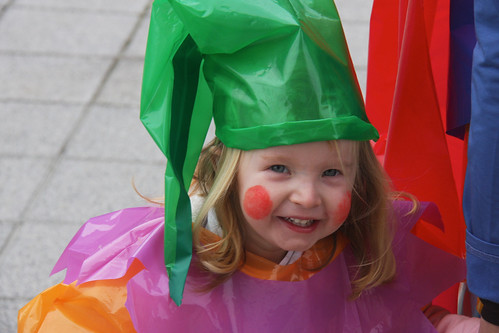 This particular dwarf followed me around town, holding my hand, and clutching around my leg when I pulled my hand away to take a photo. 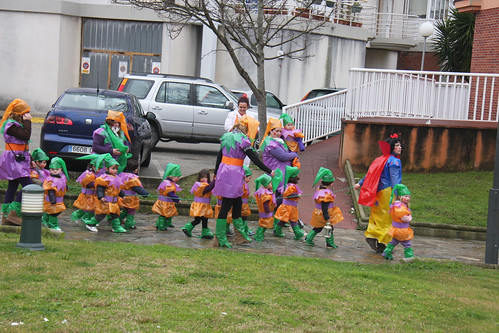 This year, as a senior at the daycare for 0 - 3 year olds, Nora had graduated from the push cart to the rope, except that she didn't stand for that long. That's her on the far right. The only way I got her to hold anyone else's hand was to threaten to leave if she didn't. 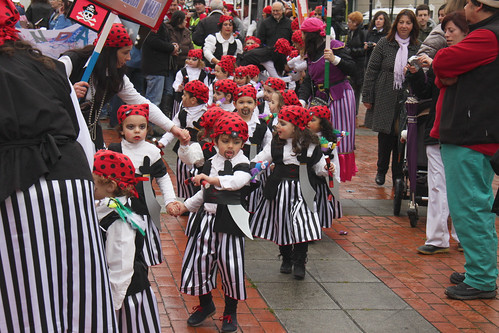 The kids from another school were dressed all as pirates. 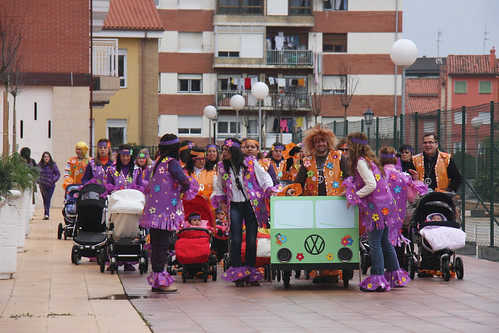 Another school were hippies. 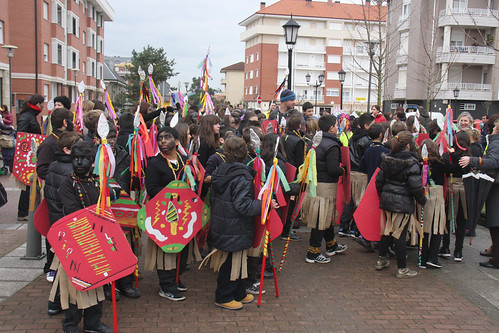 Some older kids were dressed as African tribesmen. It's a shock to my American racial sensibilities every time I see how acceptable blackface is in Spain. 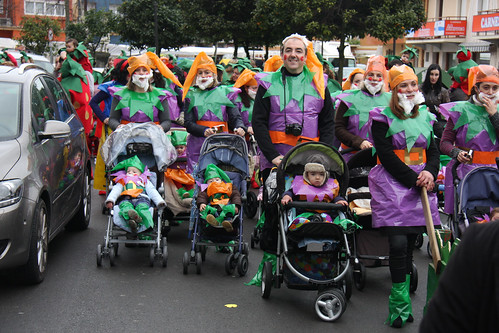 A band of big dwarves and little dwarves paraded around town. 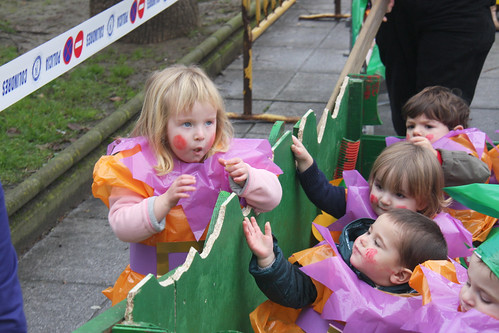 At some point, Nora figured out that the one year olds in the pull cart had snacks, and actually managed to convince them to hand her some. She never left the side of the cart after that. 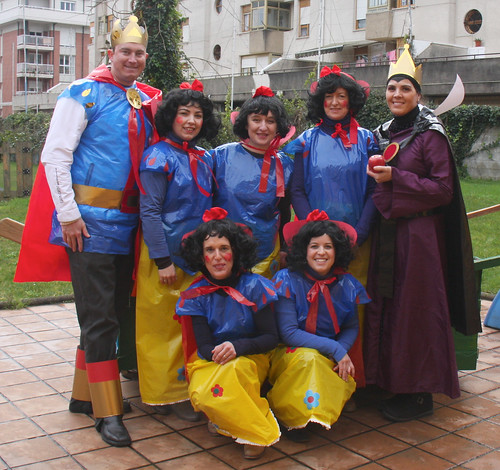 Five Snow Whites, an evil stepmother, and a prince. A couple times I asked if there would be any kissing, to which I responded that my resuscitation services were available should a Snow White lose consciousness, but luckily none did.

Just like last year, I was astonished at the work and planning and creativity that went into the costumes. I was very impressed and had a good time.

After doffing our fantastical plastic overgarments, Nora and I headed to the grocery store for our normal daily bread and food purchases. She demanded to ride on my shoulders the whole way there, and then, when we got inside, insisted that she was tired. I said, "Well sit down, then," and she began demanding a place to sit down, but I ignored her, figuring the floor was sufficient, and went about my shopping. When she switched to Spanish, another shopper pulled out a crate of milk for her to sit on. Rather than sitting on it, however, she expressed just how exhausted she was by trying to use it as a pillow, as if she was unable to hold up her own head. When we got home, however, she ate all her lunch but finally succumbed to exhaustion on the stroller ride to daycare. 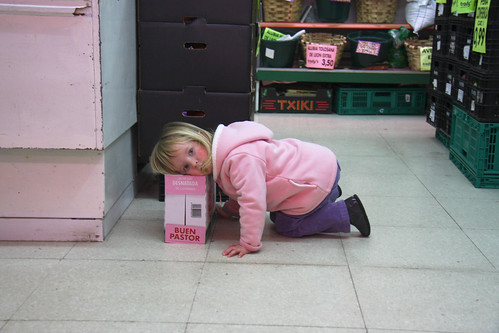 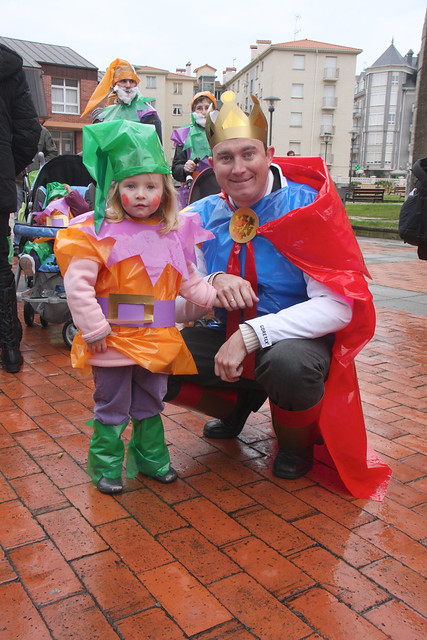 Prince Charming and his favorite dwarf.