A Guide To Spanish Meal Names

Learning the words for the meals of the day is difficult any time you change cultures, whether you change languages or not. In different parts of the US, for instance, the word "dinner" can either refer to the meal at midday or in the evening. It took me years of living the UK to realize that "having tea" doesn't only refer to imbibing an infusion, but can often refer to the evening meal. In Spain, most people eat three main meals each day, but there are words for five meals. Confused? Let's have a look...

The first meal of the day. i.e. breakfast. It's even a compound word, like "breakfast", since ayuno means "fast" (as in not eating), and des- is a negating prefix, so you're literally "un-fasting". Unlike the US or the UK, the typical Spanish breakfast is very light and completely devoid of protein. The most common breakfast is a café con leche with some type of pastry or cookies.

I always assumed that Spanish farmers or other people that do long hours of manual labor in the mornings probably eat a heartier breakfast, but I know a few of them and they don't. 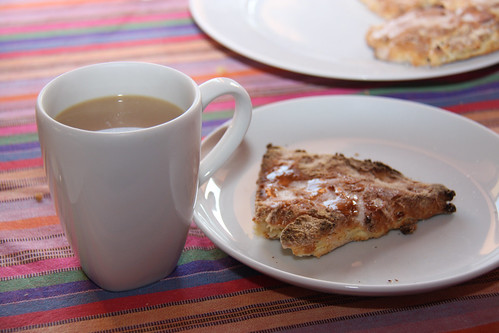 A typical Spanish breakfast: coffee with milk and a pastry.

This one is complicated. The dictionary says it's "food eaten in the morning or midday". Spanish-to-English dictionaries always translate it to "lunch" and there are those who use it synonymously with comida, but I think the best English translation would be "brunch". The few times I've had one, it was more substantial than a simple snack or tapa, and left me with no desire to have lunch afterwards. It's normally served at around noon, or just before.

Interestingly, almuerzo breaks the etymological rule of thumb that most Spanish words starting with al- came from Arabic. This word comes from the Latin word for "bite". 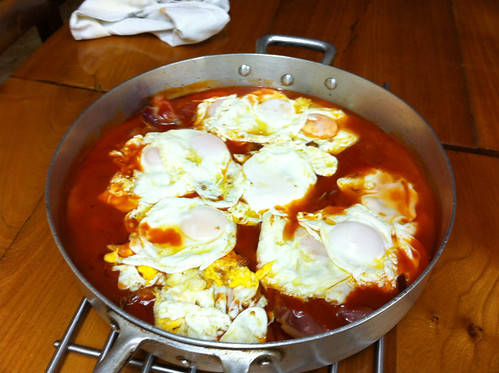 A typical Spanish almuerzo: a concoction of fried eggs, bacon in a tomato sauce, served at noon with plenty of wine.

Translating best to "lunch", this is the primary, and largest, meal of the day, eaten at midday. However, what the Spanish call "midday" is not what an American would call "midday". In Spain, they eat their lunch between 2:00 PM and 4:00 PM. Most shops are closed during this time and reopen at 5:00 PM until about 8:00 PM. While the noun comida and verb comer mean "lunch" and "to have lunch", they are also more generally used to mean "food" and "to eat", and there is rarely any confusion.

Traditionally the midday meal consists of two courses, one of which normally requires a spoon to eat, like a soup or legume stew, the other is usually rice (e.g. paella), pasta or a small serving of meat. All restaurants assume that you will be having two courses. In daily home cooked practice, however, one course is all we ever eat.

Last time I checked, nutritionists and dietitians agree that it's healthiest to have your biggest meal in the middle of the day like the Spaniards, rather than at the end as the Americans do. It may be healthier, but it can make it difficult to become productive again in the afternoon, especially if there was any wine involved. 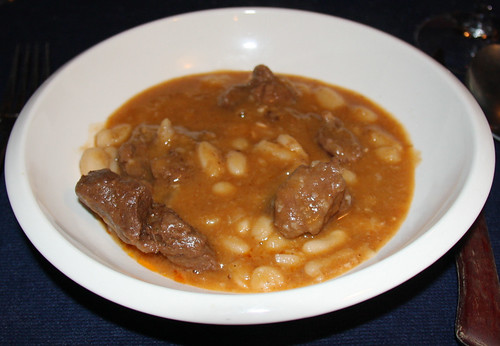 A typical Spanish lunch: beans with wild boar, followed by... 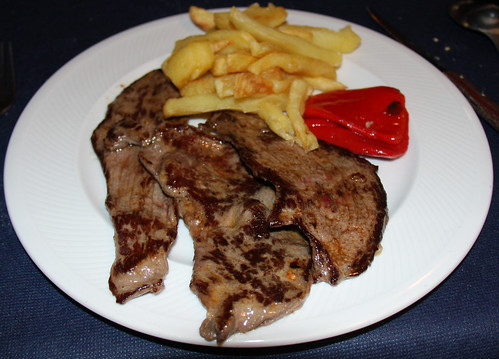 ...a steak with fried potatoes.

This is another in-between meal – like the almuerzo – and best translates to "afternoon snack". I never really heard it used until I became a parent and saw that every Spanish child has an afternoon snack of some sort, be it a piece of fruit or a small sandwich. From what I can tell, most adults don't eat the merienda, but I suppose the word could be used for some British-style tea and cookies. 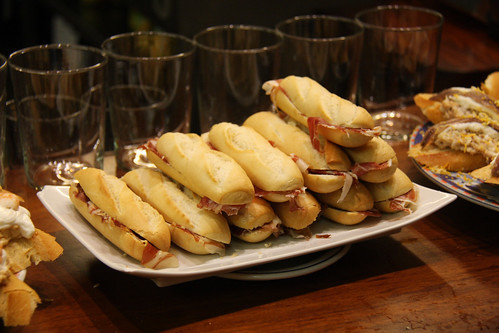 The final meal of the day is strangely similar to the US or UK breakfast: high in protein. Eggs are a common ingredient, often in a tortilla de patata (Spanish omelet). Meats and cheeses are often included. If you go out to a restaurant, sandwiches and hamburgers are a common supper. 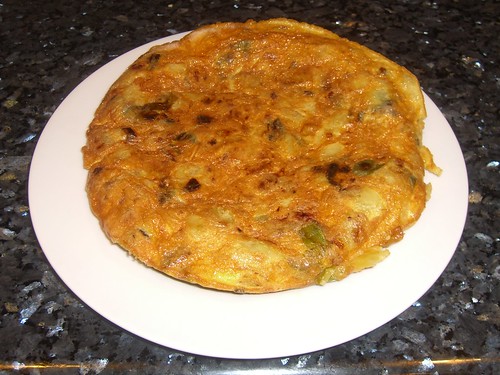 If there's one thing Spaniards love, it's food, and I think it shows in their language. Of course no one ever eats all five meals, but no matter what time of the day you get hungry, you've got a Spanish noun and verb to use.