State of the Offspring Address - January 2012

We have had our first month of nocturnal ambulation. The first incident occurred while I was asleep in Nora's room. Often, if Nora cries at night, I will get up from my bed and go sleep in the guest bed in Nora's room. This enables me to calm her down without getting up using just my voice, nipping a possible crying episode in the bud. In the time it takes her to crescendo up to a cry that I can hear from my room plus the time it takes me to get up and make it to her room, sometimes the emotions have snowballed into a bawl that's harder to quash. On the night in question, I awoke at 3:00 AM to the sound of latex on latex; Nora was rubbing a deflated balloon over my ear. When I opened my eyes, I saw her big eyes there on the bed beside me staring intently. I told her that she had to go back to bed, and I put her there with little protest. It was only in the morning that I noticed that many of the objects, like her bedtime books had moved across the room to various places during the night. A few nights later, while I was still up working, Nora got up and went into our room and turned on the light. By the time I got upstairs to see what was going on, I found her in our room staring at her blinking half-asleep mother. I walked her back to bed.

Two-year-olds still fall for the "Please close the door…no, from the other side" trick.

Another time, I was downstairs working when I heard someone get up upstairs and go to the bathroom. Then I heard the person leave the bathroom and close a bedroom door. It had to be my wife. Two minutes later, the stairway light came on. I went to investigate and found Nora standing at the top of the stairs – blocked by the toddler gate, thankfully – peering down at me silently. I put her back to bed. Later the next morning, I mentioned to my wife that she'd woken up Nora the previous night, and she said she'd never gotten up. So perhaps Nora went to pee on her own? Who knows…

I have taken another step back from Nora's regular bedtime routine, opting to sit on the floor out in the hall, rather than on the guest bed while Nora falls asleep. It's a step in the right direction, and Nora seems to be taking to it well, although sometimes she will get up and come check on me and be ordered back to bed.

Our bedtime routine has also taken a turn for the adorable. When I tuck her in and give her a hug, she usually says, whether I have or not, "Poppy! You haven't shaved today! Tomorrow you can shave, okay?" Then she demands to kiss my nose, each eye, each ear, and hair. These moments are so precious to me. 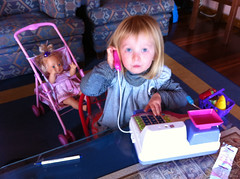 The magi brought Nora a cash register, complete with toy foodstuffs and money. She absolutely loves playing with it, saying often, "What do you want to buy?" When her playmate chooses an item, she says, "I have to scan it!", and she presses the button on the toy bar code scanner, causing a loud BEEP sound. Then she declares, "You have to pay!", but is more than willing to open up the cash drawer to give her playmate some money to pay for the item. Her business model is slightly flawed, but then she's not in it for the money. Occasionally, the bar code scanner gets magically transformed into a telephone and she holds it to her ear and talks to Rubén, who, despite actually existing, has taken on a primary role in her cast of imaginary friends that she talks to around the house. 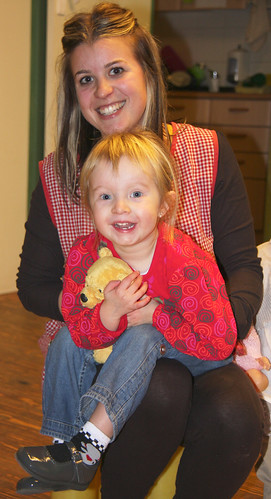 This month we had to bid a fond farewell to Nora's favorite daycare worker, Nela. Nora and Nela have always had a special relationship. For instance, Nela was the first person to be allowed to braid Nora's hair. She had decided to leave daycare work, for which she's certified, and start a children's clothing store in town. We will still see her around, and Nora would be "graduating" out of daycare this September anyway, but it's sad to see her go. I took this photo of the two of them on Nela's last day.

Several times this month, upon seeing me open the cabinet where we store Nora's medicine, she has said, "Poppy, what are we going to do? [cough! cough!]" I suppose that, after having to deal with a sick child that refused medicine to the point where she had to be held down with almost all my weight, I've got to be in favor of pharmaceutical companies erring on the side of "too appetizing" for medicine, and pretend hypochondria is just a consequence we've got to accept.

This month I learned that two-year-olds still fall for the "Please close the door…no, from the other side" trick. Sometimes when she's in my office picking items off my desk, asking inquisitively, "What is this? To do?" I have to ask her to leave so I can continue working, and this trick is working wonders at the moment.

I recall learning this song before I knew what the heck a submarine was, and I'm pretty sure that Nora still doesn't even know what "yellow" means. It holds a special place in my marriage because of a special night in a bar in the Scottish highlands when we had a particularly fun time singing it in a large crowd. The fact that we can learn songs without having any clue about their meaning still amazes me.

Nora is definitely to the age where one must be careful of everything said around her, because it will be repeated without filter to anyone she has even a little confidence in. Her mother brought home about fifty 1, 2 and 5 euro-cent coins, totaling maybe 2€, from a jar she'd been throwing loose change into at work. Next thing we know, Nora is saying, "Mommy took a lot of money from work and gave it all to me!" to everyone in the local supermarket. Of course they know that Marga's not an embezzler (or do they!?), but every single one of them remarked about how Nora's phrasing didn't make it sound very good.

How much longer is this post? A little bit, but not too much.

I recently had to following conversation with Nora…

Erik: Ow! Don't hit me with that toy. Nora: Why? Erik: Because it hurts, and I don't like things that hurt, do you? Nora: A little bit. Sometimes. But not too much.

She's not really a moderate masochist; this is her canned diplomatic response to any question requiring a yes/no or quantitative answer. e.g. Do you want some juice? How much do you love Poppy? Are you a Democrat? You have to admit that it's a clever, if utterly meaningless, response you'd expect out of the most agile politician. She's not yet three; no need to commit to any positions yet. 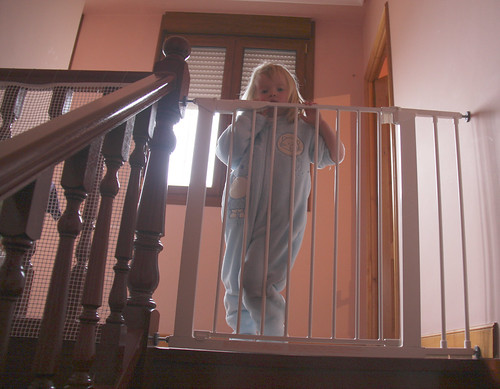