The internet has pretty much shut down today. Well, most of the sites that make the internet entertaining, such as Fark, Reddit, The Oatmeal and Wikipedia. They are protesting possible US Congressional legislation that could potentially give the US Government the power to shut down any internet site that any corporation claims is violating copyright laws. This "shoot first, ask questions later" approach is rather ridiculous to anyone that takes even the briefest moment to consider the consequences. Learn more here. Anyway, I thought I'd join in the protest by providing a graphic that uses some images to playfully demonstrate what these acronyms mean in Spanish. Sopa is Spanish for "soup", and pipa is Spanish for a smoking pipe, but more commonly it refers to a variety of seeds with an outer shell, usually referring to sunflower seeds. 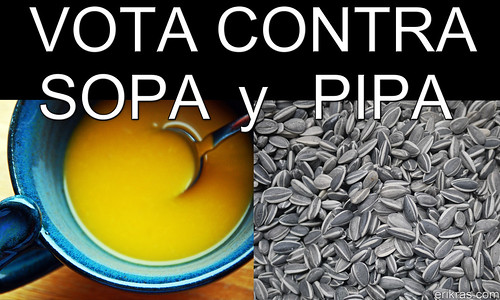