During the months when the northern hemisphere of our pale blue dot on which I reside is leaning away from our stellar space heater, the light from our star enters my office window at sunset and distracts me from my work, causing me to get up and go to the window to shut the blinds. Depending on the formations of water vapor in the atmosphere, the view of the setting sun can be either boring and gray or spectacularly amber and crimson. Today, when I went to shut the blinds, I saw a lovely display of long wavelength visual electromagnetic radiation, which I felt compelled to take a photograph of. 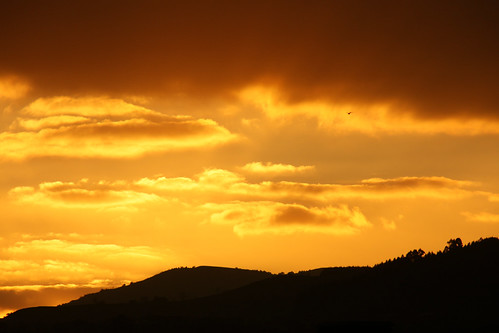 This occurrence is so common that I felt it didn't deserve much more than a tweet. What I heard a few minutes later was, ironically, exactly that, a bunch of tweeting. It is fairly common for birds to be perched on my building's antenna at dusk, but today there were so many that they didn't all have a place to sit. And then I saw...

Flocking birds really must be one of the most gorgeous phenomena in all of Nature. The natural ebb and flow and organic rhythm of their movement is what ballet dancers mimic on stage. Up and down and left and right, all in perfect synchronicity, and…without a choreographer!

What I love most about flocking birds is that we scientifically minded apes, using computers, have figured out just how incredibly simple an algorithm is needed to create such a seemingly complex emergent phenomenon. I know, because I wrote a program to do it. And yet, none of the beauty of said phenomenon is lost by our understanding of it.

My ability to identify birds is almost as strong as my ability to identify flowers or mushrooms or insects in that it's pretty much non-existent, so I don't know if these were starlings, and could thus merit the awesome term murmuration, a word which came to the attention of internauts recently with that video from Ireland. My video is not nearly as jaw-dropping as the one from Ireland, but I was certainly mesmerized as I was filming it and the several times I've watched it since. I just wish I'd had a less obstructed view and a better microphone to capture the whoosh! as they changed direction in an instant.

As quickly as they arrived, they departed, leaving me feeling lucky to have witnessed their momentary aerial ballet.