We spent Christmas in Mondragón, in the Basque Country, this year like we have every year for a while now. This year was a little more somber than most because of the recent death of the family patriarch, but I think we did a pretty good job of being respectful but not wallowing in our sorrow too much. The best part was catching a glimpse of the wonder of Christmas through the eyes of my two year old daughter. The Basques have the Christmas legend of the Olentzero, a giant pipe-smoking beret-wearing coal miner (or charcoal burner, depending on who you ask) who lives in the Basque mountains and comes down on Christmas Eve night to leave presents for the good boys and girls, and coal – which his profession gives him easy access to – for the bad boys and girls. Some say he's the sole survivor of the jentilak, a race of giants that used to live side by side with the Basques. Apparently the jentilak saw a cloud or star one day and decided it was an omen that Baby Jesus had been born and that they all had to die, so they marched into a dolmen and were never heard from again. Olentzero was left behind to give the Basques the good (?) news. It seems he wasn't a very good communicator, though, since it took Christianity between 500 to 1200 years (depending on who you ask) to gain a foothold in the Basque Country. Most of the Christmas traditions surrounding the Olentzero are fairly new and are clearly adapted from – and intended to compete directly with – Papa Noel (Santa Claus) and the Three Wise Men. They came back with special vigor in the last few decades after being brutally suppressed under Franco.

I have witnessed the festivities in Mondragón for several years. There is a parade through town with the jolly old Olentzero tossing hard candy into the crowd. The parade ends in the main town square, where children dance, songs are sung, and the Olentzero continues giving out candy to the crowds. Young people who have carried torches during the parade then light a big bonfire in the middle of the square. In some parts of the Basque Country, they actually burn an effigy of the Olentzero. From what I can tell, the bonfire is an old pagan solstice practice of rebirth. 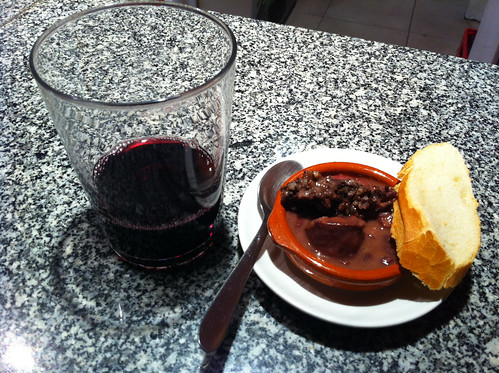 A little complimentary plate of beans, with blood sausage, to go with my Rioja. 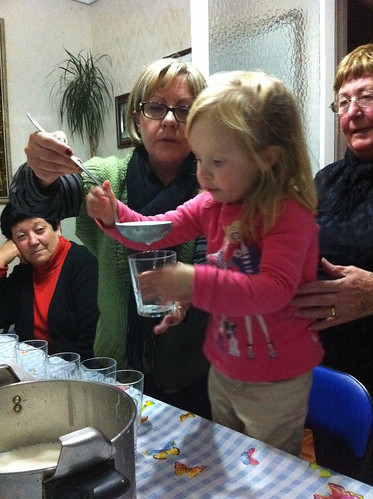 Nora and her Tí­a Marga serve a champagne sorbet that Tí­a Marga makes. 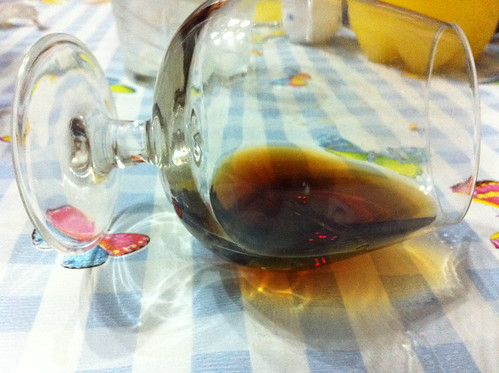 It looks like the party's gotten out of hand, but really it was just me demonstrating the proper amount of brandy to put in a snifter. It should just reach the lip of the glass when it's set on its side. Nora said, "Poppy's wine fell over!" 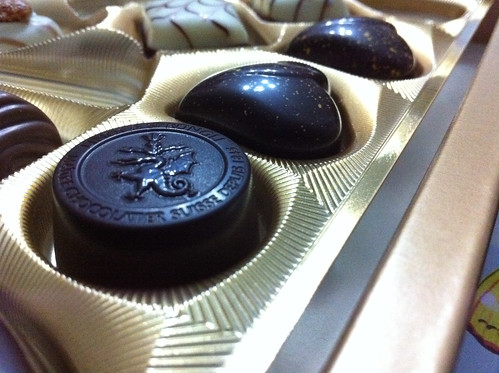 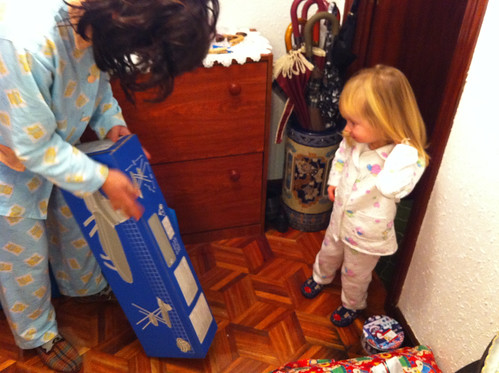 Nora was delighted to receive a toy ironing board and iron from the Olentzero for Christmas. 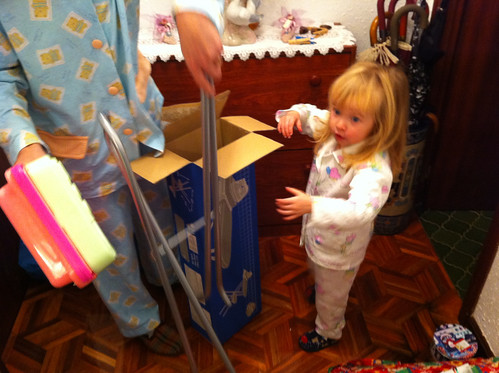 While I an generally against gender stereotyping and am 100% sure that there's no way this would've been the present if she were a boy, I cannot deny that she really and truly loves her ironing board. 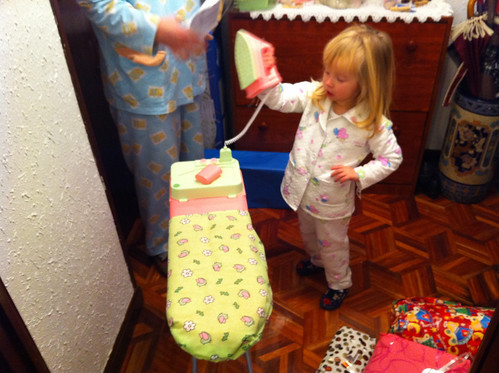 She kept asking people to give her some item of clothing that needed ironing. 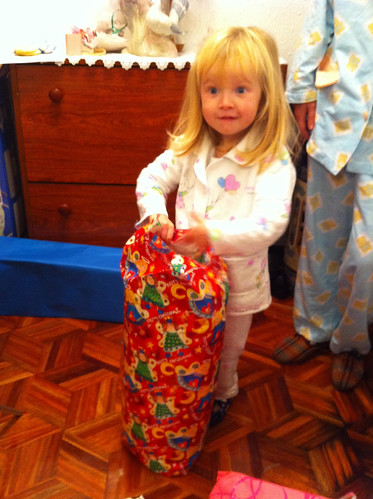 She also got a sleeping bag and some mittens. 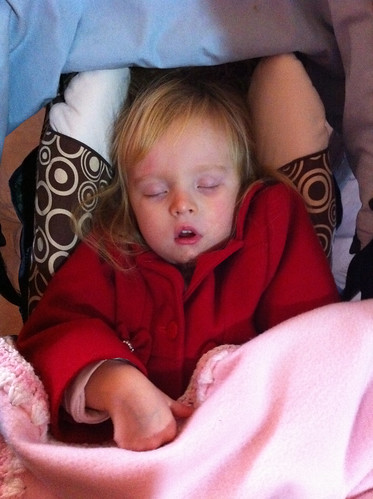 After going to bed at 2 AM on Christmas Eve and having an exciting Christmas morning of presents, Nora was exhausted. 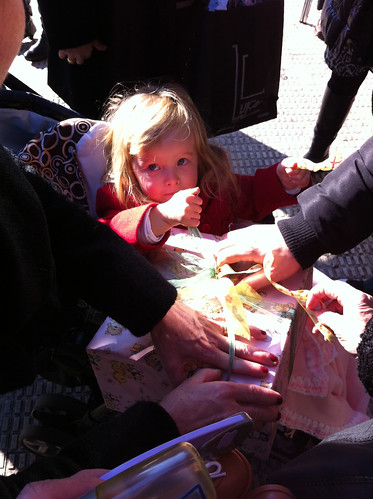 Later we met up with the rest of the family for even more presents! Here she is opening a Hello Kitty dollhouse. 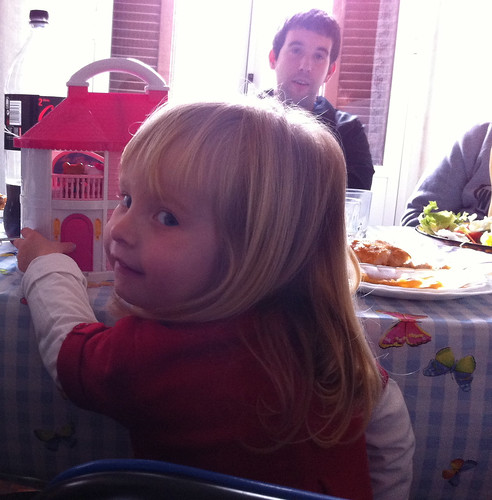 Playing with her Hello Kitty dollhouse. 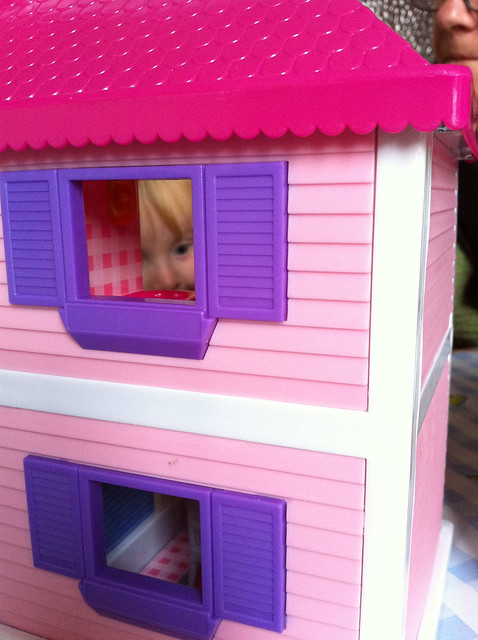 Life is not peaceful for Hello Kitty in her house, as it is rocked by furniture-rearranging earthquakes every few minutes.

We had a great time eating, drinking and playing with our family in Mondragón.