State of the Offspring Address - December 2011

We've taken a bit of a slide backwards in our nocturnal potty training efforts this month. There was one week when we had to change wet bed sheets every single night of the week. Plus, with my parents' visit and the loss of a family member this month, we have gone back to having Nora wear diapers at night to avoid the hassle of midnight bed making. While disappointing, when one takes a step back and gains some perspective, this is really not that big of a deal. It took her seventeen months to walk (and longer to crawl), and her English was slow to develop at first, but is now staggeringly advanced. We've decided we're in no huge rush with the nocturnal bladder control. 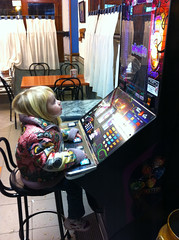 Nora has become very aware of her surroundings and has begun to orient herself a bit in town. She can name at least six different bars around town. How many American two-year-olds can do that? Recently when I was pushing her down the sidewalk in the stroller, she asked, "Poppy, can we go in Willy's and have a coffee?" I don't know why we have a bar with such an "anglo" name. Pleased with her well formed petition and up for a beer myself, I agreed that yes, we should go in for a drink. I ordered her a descafeinado de sobre, which is a cup of hot milk with a packet of instant decaf coffee. I asked for the milk to be half hot and half cold so she wouldn't burn herself. I've never understood why someone would pay the same amount of money for instant coffee as real brewed decaf coffee out of the espresso machine, but it's a very popular order in Spain. Also, it was nice for me to have fine control over her coffee-to-milk ratio (which I kept very low). She had a great time drinking her coffee, sitting at the bar like a grownup European. 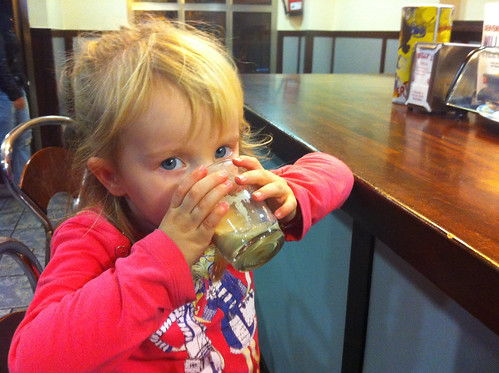 It's cute to watch her make bilingual mistakes. It's rare that she attempts a direct translation from one language to another, but when it happens sometimes it can go wrong. I remember when I learned Spanish, I had great difficulty with the words "todaví­a" (still) and "ya" (already), particularly as they were combined with "no" to form phrases: ya no = not anymore; todaví­a no = not yet. I know I'm not the only one who gets confused by this, because Spaniards make the same mistakes going the other way. Anyway… That was a long preface to tell you that the other day Nora said "already no" when she meant to say "not anymore", which I found cute. 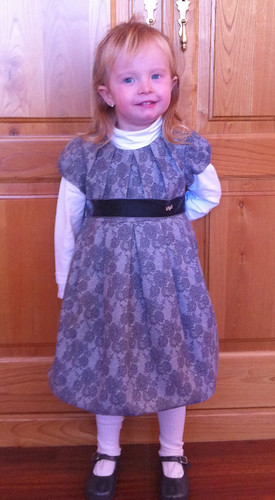 One weekend this month the weather was really horrendous and we had no plans, so we spent most of Saturday and Sunday at home. At one point when we were bored and getting on each others' nerves a little, my wife suggested we play with the Wii, which, like most gaming consoles, sits dormant after the initial novelty wore off. The only game we thought Nora might have any shot at playing was Wii Bowling. We set up a "three person with two remotes" game, with me and Nora going first and third with one remote, and with her mother bowling second. We explained to Nora how she had to hold down the button, swing her arm, and then release the button at the end of the swing. It was pretty complicated holding her finger on the button, swinging her arm, and pulling her finger off the button to demonstrate. About her third turn, her mother said, "Why doesn't Nora use my remote instead?" I said, "No, that won't work since we set up the game for her player to use my remote." To which she repeated, "Why doesn't Nora use my remote instead?" Aaaahh, yes! An excellent idea. So for the rest of the afternoon, we bowled with Nora swinging her mother's remote while I, seated on the sofa with my remote hanging out of sight, flicked my wrist in time with Nora's flailing. It worked perfectly. A little too perfectly, in fact, as Nora won almost every game. No matter what I did when playing for my character (Nora made me stand up and do it properly), I could never best the wrist flick that was controlling Nora's ball.

â€œPoppy, I stepped on you by accident. It\'s okay, I forgive you.â€

Nora has begun a strange habit of asking for things with a negative question. For instance, rather than ask, "May I have a cookie?" she'll say, "I can't have a cookie, can I?" Rhetorically, it's a terrible way to achieve your objectives. "You won't hire me, will you?" isn't going to advance your career. Negated boolean questions are also annoying because no one is ever clear what "yes" and "no" mean in response to them. The social norm is for "yes" as a response to "I can't take my tricycle to the park, can I?" does not mean "That's correct", but it means, "That's not true; yes, you can take your tricycle to the park." It's just confusing. Perhaps a case could be made that playing the poor "I never get what I want…" victim could be a potentially successful strategy, but it's certainly not something I'd want to encourage. I suspect it's just a phase, but it's a strange one. Here it is in action:

Several weeks ago, at a local bar, the bartender gave her some chocolate euros, disc-shaped chocolates wrapped in foil to look like big 1€ coins. With no subsequent mention of them at all, weeks afterwards, she had some coins – she asks for money before she pretends to "go to work" in "her office" so that she can bring back the coins afterwards having "earned money at work" – and she started prying at them saying, "Let's see what's inside!" It took me several minutes to realize that she was referencing the chocolate euro coins from weeks earlier.

My two year old loves bar hopping. Often, as mentioned above, she will suggest we go in a bar that we walk past. She likes them because there are stools to climb on, flashing slot machines to bang on, and the bartenders often give her a little piece of bread or candy or something. I don't need much of a push to enter a bar for a glass of wine, so she can be a dangerous influence on me. It sure is cute, though, when she says, "Let's go to another bar!"

I've been trying to get her to apologize when she does something bad by accident, but it's not going very well. She knows what to say when I prompt her, "What do you say?", but with no prompting, she never initiates the apology herself. Today she did for the first time, but said the wrong thing. She said, â€œPoppy, I stepped on you by accident. It\'s okay, I forgive you.â€ Hmmm…

As we finish out 2011, the state of the offspring is strong! 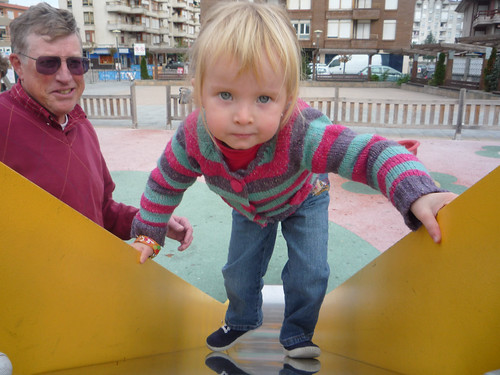