How big is the Earth's shadow on the Moon?

When I saw yesterday's Astronomy Picture of the Day, I was fascinated by just how big the Earth's shadow is on the Moon. When I made a comment to this effect on Facebook, my friend, Josh Grady, said, "It'd depend on the distance between the two, no?" Of course the size of a shadow depends on the distance to the object its cast upon, but I hadn't considered that the distance from the Earth to the Moon varies, due to its slightly elliptical orbit around the Earth-Moon barycenter, by 42,840 km, causing it to appear 12% smaller at its apogee than at its perigee. This raised the question: What are the minimum and maximum sizes of the Earth's shadow on the Moon?

This is the composite photo, taken by Letian Wang in Beijing, China, on December 10, 2011, that originally sparked my interest. You can see that the radius of the Earth's shadow is slightly greater than the Moon's diameter.

First of all we need to define what we mean by "shadow".

For the purposes of this post and subsequent calculations, we will only be dealing with the umbra, the dark bit where no direct sunlight hits the moon. We will be ignoring the indirect sunlight that is refracted through the Earth's atmosphere during an eclipse, bathing the lunar surface in reddish hue.

Okay, let's do some math! 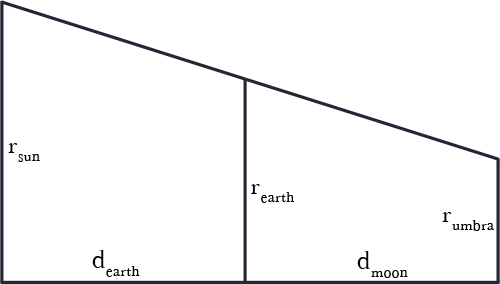 Here we can see the relationship between the radius of the umbra to all the distances involved. Do I even have to mention that the diagram is not to scale?

If we draw two more lines, we get two congruent right triangles. 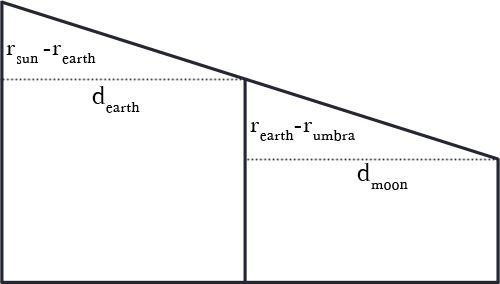 Since we know they are congruent, we know their sides are proportional and can write the following equation:

…which we can solve for the radius of the umbra:

When we plug in the values for the radii of the sun and Earth, we get:

The ratio is at its minimum when the Moon is at its perigee and the Earth is at its apogee.

To visualize this, let's look at the minimum and maximum shadow sizes compared to the Moon.

Not a very big difference, I think you'll agree. We did, however, answer our question.

At least now astrophotographer and artist Laurent Laveder will know the range of sizes for his hoops for his incredible lunar eclipse photography. 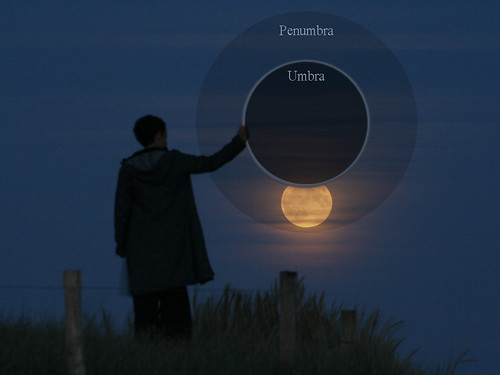