Pickin' and Trimmin' - A Barbershop Documentary

In 2007, Matt Morris, an award-winning documentary filmmaker, directed a short film about a barber shop near where I grew up. One of the owners of the shop, David Shirley, the well spoken gentleman with the full head of white hair in the movie, is the father of one of my best friends and guitar mentor, Phil Shirley. The movie does an excellent job of capturing a dying southern American small town bluegrass culture. It might have been the influence of my "yankee" born parents, but I never really felt at home in the deep southern culture. Something about it always annoyed me a little bit, although I can't quite put my finger on what. Perhaps it is my lack of deep roots that allowed me to move so far away. But I definitely do recognize and know the culture depicted in the film, even if I never really felt a part of it.

I admit that sometimes I forget just how people talk back home and it's a shock when I visit. The manner of speaking in this film is a very authentic example of western North Carolina speech. If you have any interest whatsoever in bluegrass music and how it's really played in the Deep South, I urge you to spend nineteen minutes watching this film. You won't regret it.

The music is absolutely fantastic. I particularly liked the pun-laden knickknacks. Here's a list of all the awards this movie has won.

In case you're curious of just how small the town is, you can have a look around on Google Street View. That's the barber shop with the white awning and the pickup truck. Give a 360Âº spin to really appreciate the locale.

Unfortunately, two years ago, the head barber, Lawrence Anthony, the first person to talk in the film, passed away. His son intends to fulfill his father's wish to keep the shop open. Since then, the shop has sustained some water damage and is in need of repair. You can find a follow-up video and a link to donate to Lawrence Anthony's nonprofit Barbershop Preservation Fund here. I've just made a donation.

It would be a true shame to lose this culture. Thank you so much to Matt Morris for documenting it. 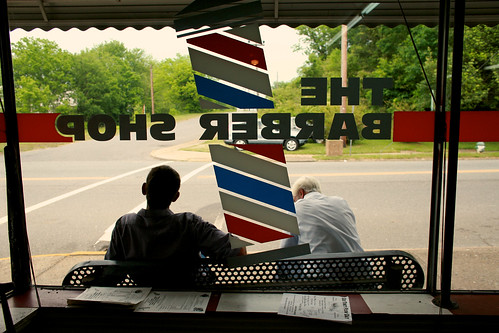