One Laptop Per Nora

Four years ago, probably as a result of Nicholas Negroponte's TED Talk, I became fascinated by the One Laptop Per Child (OLPC) program. I loved the idea of providing very cheap, easily networkable computers to third world children, since I know from personal experience how computers are so good for childhood learning. Before starting the project, they wanted to make a "one hundred dollar laptop", built entirely on open source software. Unfortunately, they could only get the price down to $199, which is still pretty impressive once you learn all the features of the device. When they were initially released, they had a clever gimmick where you couldn't just buy one for yourself; you had to buy two and donate one of them. On December 27, 2007, I paid $399 for two laptops, one to be shipped to me and the other to be sent to a needy child in the third world. They were in such high demand at the time that it took three months to ship it to me. 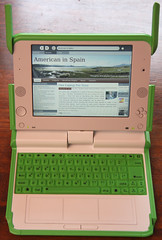 The laptop was very interesting, loaded with about twenty different apps, from drawing programs to reading programs to a programming app much like the original Logo Turtle that captivated many hours of my prepubescent youth. There's a front-facing video camera for video conferencing and a fully featured web browser. Another key feature is its durability. You can drop it off a table with no damage, and you can even use it in the rain. It won't work actually underwater, but how many laptops do you know of that work in the rain?

It's cool to play around with, and I'm glad I quenched my curiosity about it, but with a powerful Mac with a 30" screen in my office, the OLPC laptop doesn't get much attention. My secondary motivation for purchasing the laptop was to give it to my first born child as a first computer. But then her grandfather gave her a freakin' iPad, and she loved it, so I thought the OLPC laptop would be a lost cause.

When my parents were visiting last week, I set up an old MacBook Pro of mine for my parents to check their email when I was working in my office, and Nora became fascinated with the MacBook. When her pawing at it got a little too vigorous for my liking, I told her to leave it alone. She cried that she wanted a computer, and then I remembered the OLPC laptop. I pulled it out and plugged it in to charge it up. She absolutely loved having her own computer that didn't require a constant stream of Be Careful's from adults. She learned how to open it (it's not easy the first time you hold one) and turn it on. The trackpad and keyboard elude her capacity so far, but she loves pretending to be a computer user like her old man. Her playhouse was designated as her "office" and she set up a chair and desk to work in there. 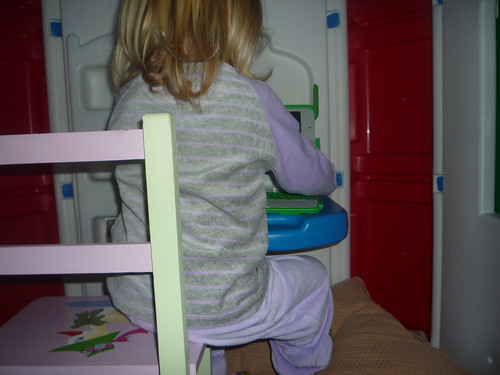 My little entrepreneur in her office. She works in her pajamas, just like her old man! 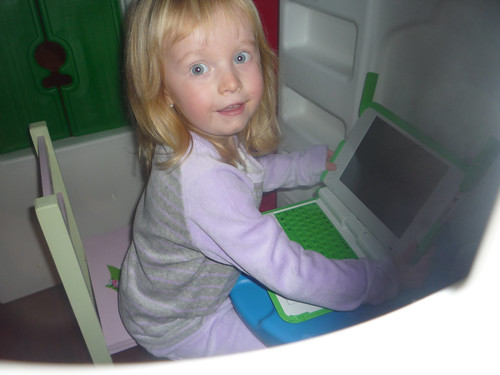 The Give One Get One program ended on December 31, 2008. Now you can only make selfless – though tax deductible – donations, but I'm sure you could probably find one on eBay. Click here to donate.