Newt Gingrich Morphed Into A Newt

I've been very much enjoying the puppet show that is the GOP's attempt to find a candidate that has any chance of defeating Obama in the 2012 presidential campaign. As the media's interest in each candidate ebbs and flows, they are each shown to not really be a contender. The most recent fad in the race is the former Speaker of the House, Newt Gingrich. As I watch the news coverage, I can't help but chuckle to myself about the possibility of having a president with the same name as a species of salamander. I figured it was time to dust off my morphing skills and actually turn him into a newt. Warning! This video may frighten you.

It might be nice to have a president, for once, that can crawl up walls. 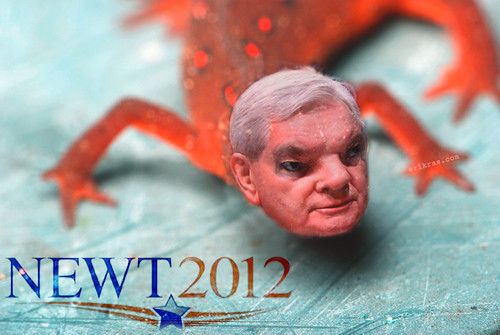 Photo of the politician by Gage Skidmore. Photo of amphibian by Eric Highfield. Music by Kevin MacLeod.