Today I finally got around to attempting a bit of Photoshop trickery I've been wanting to try, creating a photo of me dancing with my two-year-old daughter where our sizes are adjusted, either me down to her height, or her up to mine. It turns out that this is very, very hard to do well. The principal difficulty is aligning the hands, in space and with the proper angles, so that they appear to touch. Of the five or so photos I took to work with, I chose the best two to merge together. The result is a photo where the viewer is never really fooled into thinking that the two people are actually interacting physically. One thing it does highlight is just how different the proportions of adult and toddler bodies are. The enormous human brain (and cranium) grows quickly, and the body much more slowly. The result of my experiment is worth sharing, but, like I said, it's not that convincing. 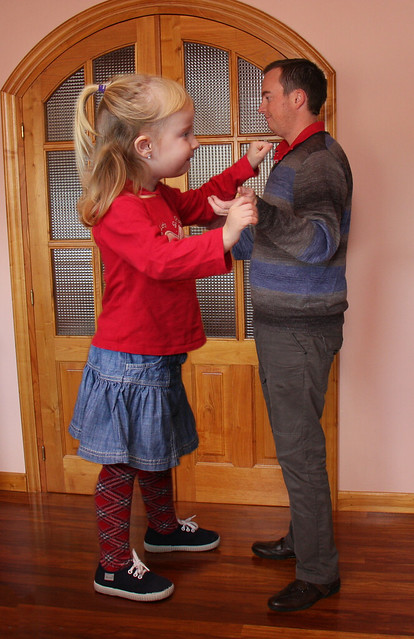 I did, however, get a cute shot and anecdote from my experiment. 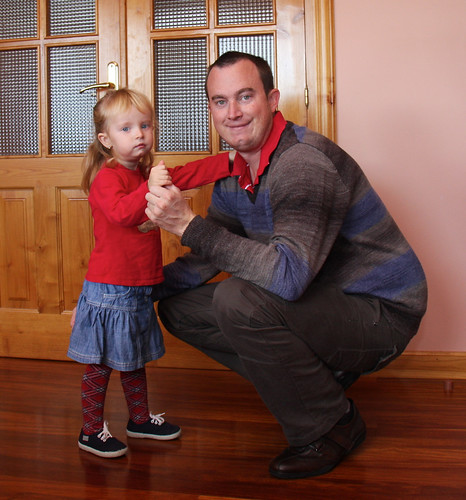 This is one of my attempts to capture her in dance pose, but my hand is covering her arm too much. 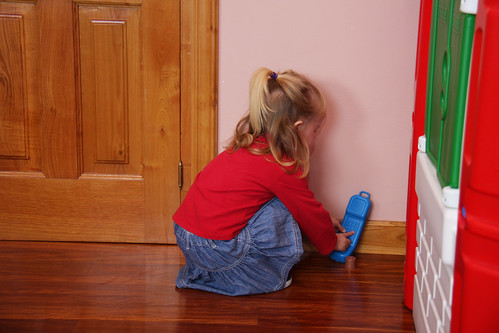 When I was folding up the tripod to put it away, Nora declared that she was "going to get her camera", which turned out to be the toy phone from her playhouse. She set it up, leaning against the wall, "pressed a button" to set its imaginary camera timer, and then ran over to me to pose. "You have to be here, like this," she'd instruct. When we were posed, I would click my tongue to simulate the shutter noise, and then she'd run over and "set up the camera" again. We did this about fifteen times. Do they make toy photography tripods? She already took her first photo with my iPhone last week.