How fast do you need to drive in the rain to keep your rear window dry?

Last week, we had quite the deluge, which coincided, unfortunately, with me having to drive 120 km. I noticed that whenever I slowed down, the rear window would get wet and hard to see out of. Once I sped up again, one wiper pass dried it off and it stayed dry until I slowed down again. This is an obvious scenario for anyone who has ever driven, or anyone who thinks briefly about the physics involved: when you're driving fast, the rain doesn't hit your rear window. Out of the blue (or gray, in this case), my mouth spoke the words, "I wonder what's the minimum speed I have to drive to keep the back window dry?" My wife immediately intuited that "it depends on the shape of the car", by which she meant the angle of the rear window. This insight made the original question all the more interesting to me, because it gave me an equation to plot! Are you getting excited yet? Let's define the angle of the rear window as being the angle, going down, from horizontal, like so:

I did not draw this car, René van Belzen did.

If we stop to think about it – and we should, as it's good practice – two features of the plot of our "minimum speed to keep the rear window dry given the angle θ" equation can be deduced. Firstly, when θ is 90°, the minimum speed will be zero, since the rain – which we are assuming, for simplicity, is falling straight down – won't hit it even if we are stopped. Secondly, as θ approaches 0°, the minimum speed to keep the rear window dry will shoot off to infinity. Note that we shall also be ignoring near-speed-of-light Einsteinian physics, as the Newtonian model is more than sufficient for the speeds I drive. So we can picture our graph dropping down from infinity and then making its way down to the x-axis, maintaining a negative slope the entire time, until it hits 90° on the x-axis.

Okay, so we have our equation, but we have too many variables. We need to find a way to write h in terms of l, and we need a rain velocity.

Simple trigonometry tells us that the tangent of the angle in a right triangle is equal to the opposite side divided by the adjacent side, so...

Thus we can replace h in our previous equation, giving us:

The length cancels out, and we get our final equation:

There are two things that I like about this. Neither the height nor length of the window really matter, just as my wife's brain intuited instantly. The second is that of course the tangent operation is involved, since it zips off to infinity, yet calms down near the x-axis. Since we need it to zip off to positive infinity near the y-axis, it must be inverted. What I love about math and physics is just how intuitive it can become. My mathematician readers were probably already thinking about the inverse tangent function when I discussed the general shape of the data, particularly given that an angle – and thus trigonometry – was involved. Let's continue!

Wait, before we continue, let me go off on a bit of a tangent (oh dear, trigonometry jokes are a bad sine)... After I finished writing this post and was lying in bed trying not to think about angles and hypotenuses, it occurred to me that the tangent only has to be inverted because of my arbitrary definition of where we start measuring the angle. If we define 0° as being the vector pointing straight down, the direction the rain is falling, and measure the angle away from the movement of the car, then we get a plot that starts at 0 mph at 0° and goes up to ∞ mph at 90°, just like the normal, unmodified tangent function does! But wait, this mathematical model gets even better! What happens if you increase the angle past 90° (sort of like a spoiler)? The tangent function flips back to negative infinity and comes up to 0 mph at 180°, which still accurately models the speed the car would have to travel to keep the rear window dry, since it would have to be going very fast in reverse, and then less fast as the angle approaches the vertical 180°! This is exactly the kind of real world application of a mathematical principle that is so often lacking in our education system. Anyway, I thought that was cool. Back to our regularly scheduled post...

We need a velocity for the rain. What is the terminal velocity for a rain drop? I asked the internet, and the internet said that a small drop of light stratisform rain falls at about 4.6 mph, and the largest possible drop – they can't be bigger than 5 mm or they break up (awesome high speed video!) – from a huge thunderhead falls at up to 20 mph. We're going for a minimum speed to guarantee a dry rear window, so we'll use the 20 mph figure.

When we substitute 20 mph for our rain velocity and convert from radians to degrees, our final equation looks like this:

And now we're ready to plot it! Drumroll please... 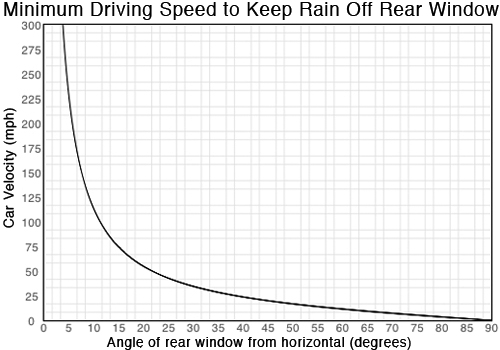 Exactly what we expected, isn't it?

This Wolsely Hornet has a rear window angle of 57°. That means that, if it goes more than 13 mph in even the harshest thunderstorm (of absolutely vertical rain), no rain will hit its rear window. Isn't that incredible? It seems slow to my internal physics engine.

This Peugeot 203 Limousine has a 35° rear window, so it will need to accelerate up to 28.5 mph in order to keep it dry. As you would expect, if you have a 45° window, the velocity you need to travel is 20 mph, exactly equal to the rain's velocity.

And lastly, this Porsche has a 16° rear window, and thus it will need to zip up to 70 mph to keep dry. Obviously this will be no problem for the Porsche, but you can see how the velocities are increasing very rapidly as we approach the horizontal, due to the very nature of the tangent function.

My curiosity is satisfactorily quenched on this topic, and I hope you learned something. Math is all around us and lets us know things about the world through mere thought and some pen and paper. Isn't that fascinating?