State of the Offspring Address - November 2011

The big change in the offspring this month has been the transition to the Big Girl Bed. It went quite well, and she's been very proud about sleeping in a bed and not a crib. I dismantled the crib and moved it into storage, which was sad in a "my baby's all grown up" sense, but also because I did it on what would've been the due date had our second pregnancy made it to full term. Nora hasn't really fallen out of bed yet, but she has "oozed" most of the way out several times. Since the bed is so close to the floor, I often find her sleeping with only part of her body on the bed. My hypothesis that a nightlight would provide some visual stimulus and reduce nocturnal disorientation terror seems to have been correct.

Nora has been very interested in stories lately. She has a big Mom's Book of stories that her "Grandma Amy" (my friend Jacob's mother, star of such episodes as First Swim and Blueberries) gave her. It contains all the classics, Three Little Pigs, Little Red Riding Hood, Ugly Duckling, Snow White, Goldilocks, Cinderella, plus songs like Twinkle, Twinkle Little Star and Here We Go Round The Mulberry Bush and nursery rhymes like London Bridge Is Falling Down and Little Bo Beep. It's good to have a reference to patch up the ragged cultural tapestry remaining from childhood. The stories are rather humorously Americanized; for example, the ugly duckling's name is Nathan and the big billy goat is Bubba. 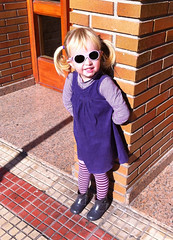 Nora's favorite story, by a considerable margin, is Little Red Riding Hood, which she had been told in Spanish before I started reading it to her in English. In Spanish, it's called Caperucita Roja, which is quite fun to say. She hasn't managed to say the English title in its entirety yet, but rather asks to be read "Riding Hood".

When I read her the stories, I'm pretty sure that she doesn't really follow the plot yet, but the verbal part of her brain loves to hear adults talk, and she's found that asking for a story to be read is a good way to get an adult to string a bunch of words together. But if you quiz her about the content of the story afterwards, she fails the quiz. But she does understand that wolves are scary and should be avoided, which is always an important forest survival skill.

When your child inevitably asks why Little Red Riding Hood's grandmother was sick, the correct answer is, "Because she went outside without a coat on."

Her imagination is growing every day. Imaginary beings are appearing around the house, needing to be herded and controlled. Right after Halloween, the house became infested with witches which needed to be watched out for and commanded, with all the fervor of an exorcist, to "Stay in that room over there and don't come out!". The other day, after I had read Little Red Riding Hood to her for the thousandth time, she uttered this complex concept full of consequences:

Poppy, don't go into my [play]house, because there's a wolf inside. And if you go inside, it will eat you. And then Nora won't have a Poppy and Nora will cry.

That statement shows a pretty solid understanding of cause and effect and the ability to predict the consequences of possible actions. 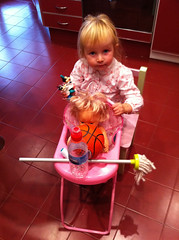 She continues announce that she's "going to work" with her backpack on heading to the room down the hall where she stays for sixty seconds before returning to pass around the imaginary money she earned to everyone. Apparently her lessons in Capitalism from when she was four days old didn't sink in.

One day Nora and I went to drop off some dry cleaning. When you run errands with a child in a small town, your child ends up being given a piece of candy by just about every shopkeeper. I normally let her eat one or two, but if she's given more, then I make her save them for later. Nora was riding in her stroller unwrapping her candy as we headed to on errand. Without me slowing down at all (because I didn't know of her intention), when we passed a trashcan, I saw Nora's arm reach up and drop the candy wrapper in the trashcan as we sped past. I was so proud, and I showered her with praise. That's the kind of inference from past evidence and visual-motor control that it would take fifty PhD's two decades to teach a robot to do. 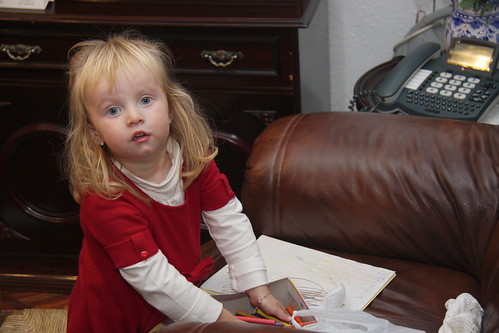