Recently I noticed a minor bump on my left hand, in the center of the palm. It itched a little, but I thought little of it. But then it kept growing, almost until it looked like a little human nose. I made a doctor's appointment and went in to see my physician. She nodded and asked, "I don't suppose you spend a lot of time on the internet spewing sarcasm on social networking sites, do you?" Startled by her insight, I relied, "Well, maybe a little, yeah." "And do you use puns and wordplay excessively," she continued, "sometimes with an awkward narrative for the sole purpose of a not-that-funny punchline?" "Yep, that's me," I admitted. She said, "I thought so. You've got a textbook case of Facepalm. I'm afraid it's going to get worse before it gets better." Sure enough…shortly thereafter, three holes formed around the nose-like protrusion, and then one day…its eyes opened!

It was creepy for a while with him gazing around as I went about my now-awkward daily routine. I wore a glove outside to not attract attention. It seemed like a condition I could live with.

And then he began to talk.

He's a sharp tongued, sarcastic little jerk, I must say, always finding some commentary on what's going on, criticizing how I tie my shoes or brush my teeth. When he gets really annoying, I punish him by using my left hand exclusively for scratching places you'd rather not put your nose. Strangely, though, he rather likes the ointment I'm using to treat my condition. Perhaps his appreciation of irony is greater than any desire for self preservation. The doctor expects me to be cured in a week or two. 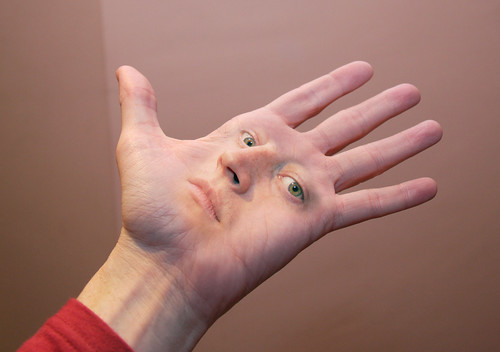 I call him Wilson. He's not amused. Looks pretty good larger, too. 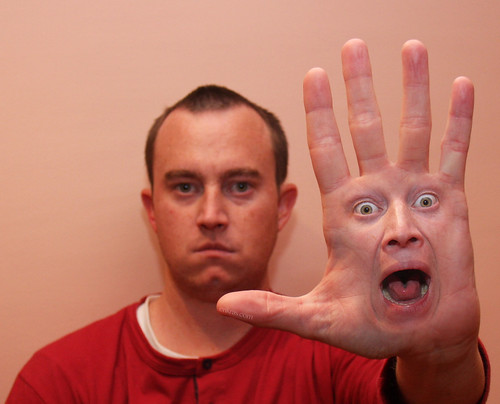