I think that perhaps we waited too long to make the transition for Nora from her crib to a real bed. Lately she has been sleeping very poorly in her crib, and it's clear that it's the size that is bothering her. Or at least it's clear to me, as a larger-than-the-average-bed individual. You know those nights we all have occasionally where no matter what posture you adopt, you're just not comfortable. As adults, we moan or sigh, but a two year old cries. This past week, the only way I've been able to get any sleep is to sleep in Nora's room, which also doubles as our guest room (with two single beds put together into a double), with Nora in bed with me. Nora's night unrest is my problem, since I don't have a six o'clock alarm clock like Marga does; I get up when Nora does, so if she doesn't sleep well and wakes up late, so can I. Personally I despise sleeping with my child because I can never truly relax knowing that she's safe (from falling out of the bed).

My in-laws are visiting at the moment, so that means that they sleep in the guest room with Nora. Normally this is no problem whatsoever, but since Nora has been requiring so much extra-crib attention lately, and the switch to The Big Girl Bed is so drastic, it was a risky proposition last night, switching her when her room was already fully occupied.

Initially we weren't sure how to handle her transition to a big bed (whether to buy bed rails, etc.), but I came up with the idea to use the trundle bed, a bed that rolls out from under another that we have in my office to start her off close to the floor in case she rolled off. The trundle bed has spring loaded legs that, if you pick it up, will release and raise to the level of a normal bed. But for Nora, we're leaving it initially low to the ground, barely higher than the mattress alone would be. 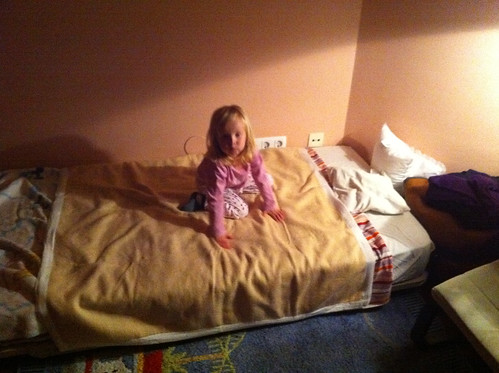 Ready for bed on Big Girl Bed, Night #1. Yes, we have childproofed those unfortunately placed outlets.

She was pretty excited about being in The Big Girl Bed, and was happy to go to sleep last night. From 22:00 to 1:00, everything was great. I went to bed just before 1:00, and at 1:15 I was awoken by Nora's cries. She had woken up and, unable to feel around to the bars of her crib, had gotten spooked like those times that all of us have when we wake up in a hotel room and aren't entirely sure where the heck we are for a few minutes as we slowly regain consciousness.

I got her back to sleep and slipped off to my room, only to return two minutes later. This happened about five times in a row, until at about 2:00, I brought her into our room where we'd "hidden" the crib and placed her in it. She seemed delighted at first to be back in her comfort box, but she never really got to sleep and soon started moaning with discomfort like she has been lately. We tried to talk her down for another thirty minutes before it was too much to bear and Marga escaped downstairs to the office and Nora took her mother's place in bed next to me, where she and I tossed and turned all night, including several unconscious two-year-old fists slamming into my face throughout the night.

We knew the transition would be difficult, and it definitely has been so far, but it's just been one night. What is really needed, I think, is several nights when I can spend the night in her room in the guest beds and talk to her to calm her down when she wakes up disoriented. 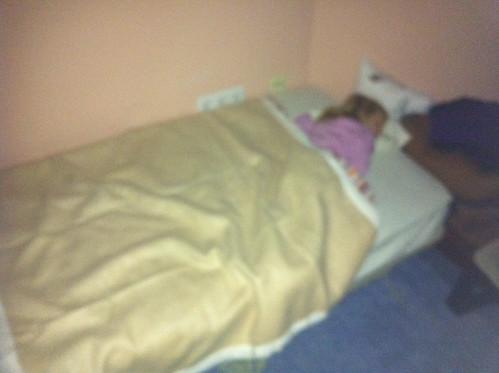 UPDATE: Night #2. I slept in the same room with Nora, and most importantly, left on a nightlight all night long to give her visual orientative stimulus whenever she did wake up. We took two trips to the bathroom and woke up about five other separate times to cry for a bit and reposition the blankets, but overall it was a very successful night spent entirely in the Big Girl Bed. When I got up, she looked like this, sleeping perpendicular to the bed: 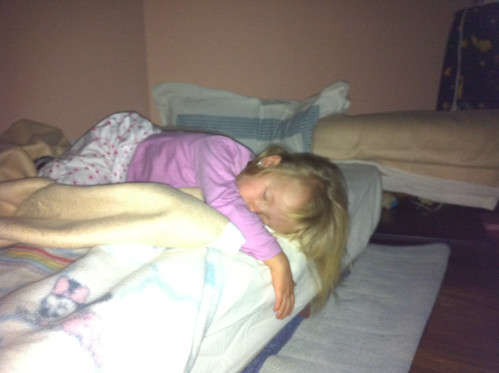