Several months ago, I was informed that we were to stop recycling plastic bottle caps of all kinds in our household because my mother-in-law was collecting them to give to a charity to help a sick boy. Immediately, I was skeptical and full of questions. I feel unsettled when I hear of a scheme like this and I can't understand the motivations of all the parties involved. When beer or soda companies offer to support a local sports team if residents collect bottle caps of their products, that's one thing; that makes sense to me. But this indiscriminate collecting? What could possibly be the motivation? Unfortunately, at the time, I got no answers other than that some organization in the Basque Country was collecting bottle caps and was going to donate money to help this child. Months passed...and then, today, in the local newspaper, I see a story about local organization that is doing the same thing to help a sick little girl, providing me with a website to investigate and get to the bottom of this bizarre philanthropic scheme.

I also found this news report, which is in Spanish, of course.

Apparently there are recycling companies who have some interest in receiving these plastic caps. They have offered to donate 200€ for each metric ton (1,000 kg = 2,204 lb) of caps collected. The little eleven-year-old girl, Aitana, requires an operation in Boston ("which is very expensive since medicine is private over there", the reporter mentioned) that costs 200,000€.

Whoever came up with this idea is an absolute genius.

Let's do some math, shall we? For every kilogram of bottle caps I save, the company will give 0.20€. I asked the internet how much a bottle cap weighs, and the general consensus is that it's between 2-3 grams. That means that I need 333-500 bottle caps to complete my kilogram, which comes out to 17-25 bottle caps for one euro cent going to Aitana's 200,000€ operation.

Further research has uncovered the recycling companies' motivation behind such an effort.

Plastic bottle caps are often made from a different type of plastic from the bottles they're attached to. Soda bottles are generally made from Type 1 Plastic (Polyethylene Terephthalate) while bottle caps are made from Type 5 Plastic (Polypropylene). These different types of plastic have to be recycled separately. If the bottle and the cap were recycled in the same batch of plastic, the two different plastics would melt unevenly and the whole batch would be ruined. 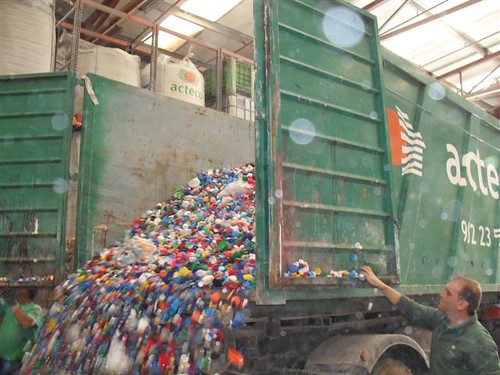 Whoever came up with this idea is an absolute genius. Ignoring any marketing philanthropic "corporate image" benefits for the recycling companies – of which there aren't many since I can't seem to find the name of any participating companies – it seems pretty obvious that it would cost considerably more than 200€ to remove the caps from 500,000 bottles, even if it could be mechanized. The task of getting the general public to properly separate items for recycling must be one of the hardest issues for recycling companies to tackle.

The media, of course, absolutely loves tearjerking stories of little dying girls, so there's no problem getting the message out. Local governments are also suckers for positive press, and are willing to set up bottle cap collection centers at the town halls. Schools can use it as an easy way to teach simple philanthropy to the nation's children.

Your average citizen that decides to participate in this scheme by saving bottle caps isn't going to do the math and see that, if it takes five seconds to save each bottle cap, then it requires three and a half hours of work to produce a single euro to help the little girl. But, what it steals from you in paying ridiculously low wage is made up for by the positive feelings of wellbeing that philanthropy brings. I'm certain that, psychologically, someone saving bottle caps is going to be happier than a cynic who has done the math and refuses to based on the triviality of it.

It's nice to find a scenario in which all parties involved come out winning.