I am a member of the Laredo Club de Golf, the 2010 winner (I did not participate) of the Spanish Championship Between Clubs Without Courses. It's tough, you see, to have a golf club without a course. We live in a little pocket in northern Spain where there are very, very few golf courses. In fact, the Laredo Club de Golf has more members than any courseless club in Spain. As a member of said club (membership dues are practically nothing without a course), I was invited to play in the 2011 Laredo Club de Golf Championship, played in LLanes, Asturias, nearly a 75 minute drive from Laredo. Due to my own timidity in my spousal "escape for 9 hours on a Saturday" permission submission, it was only two days before the event when I requested to participate. The captain of the club, Pedro, was quick to act and I was immediately entered. So it would come to be that I would get up at 7:45 in the morning on Saturday and drive 75 minutes west to the neighboring province of Asturias to participate in the 2011 championship. I was in the car by 8:05, and I put in a rock CD from back when I was 20 years old, and I headed west, across the frontier. Either my iPhone or Google, and certainly the human operator, committed an error, and by 9:15, I was in very deep Poo. No, really, I was actually in a town called Poo (pronounced with two syllables, POE-oh). If I hadn't been so late, I'd've stopped to take a photo of the sign. I had overshot Llanes and had to head back. At 9:20, my iPhone told me I was 25 minutes away from the golf course, and my tee time was 9:50. Sure enough, I got there just in time to check in and rush to the first tee to meet my competitors, Javier, Francisco and Marta. The first two were ten years my senior and the latter looked to be about 14 years old. 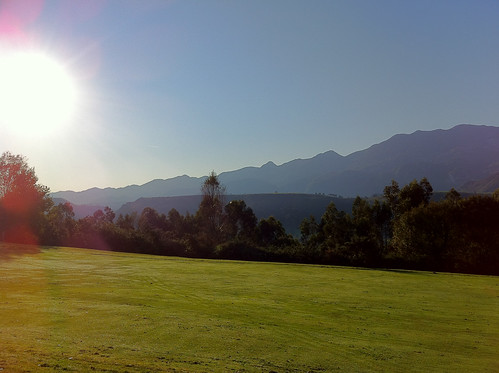 I hadn't played since June 18, in Ireland, so I was pleased to see my drive off the first tee find the center of the fairway. Marta's mother followed us for the first hole and then for her daughter's drive on the second, before saying she had to leave. Once her mother left, Marta's game picked up considerably. There is something truly beautiful about a young person with a gorgeous swing hitting it right down the middle every time. 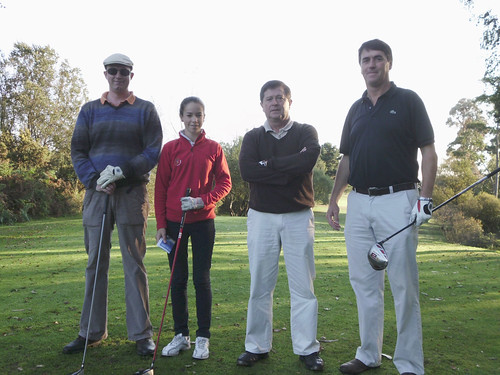 My foursome: me, Marta, Francisco and Javier. We very quickly took off our sweaters. 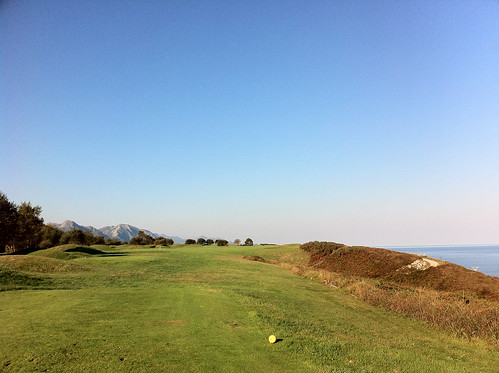 The Llanes Municipal Golf Course is in an absolutely gorgeous setting. I played there once before, but the weather on Saturday was spectacular! There was nary a cloud in the sky and the visibility was only limited by the curvature of the earth. The golf course is up on a ridge between the sea to the north and a valley and a mountain range to the south. I really could not stop admiring the view.

My game was frustratingly uncategorizable. I started out hitting my drives and longer shots pretty well, but three putting everything by blasting the first putt way past the hole and missing the one coming back. About halfway through the front nine, I finally figured out the speed of the greens, but then my drives went to hell, forcing me to recover, rather than attack, on every hole. Once my putting switch did flip from sucky to awesome, however, I did sink several long putts, resulting in two back-to-back birdies on the front nine. 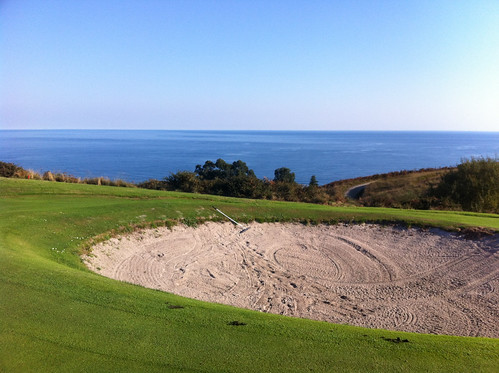 I never once hit out of any sand. My companion, Javier, did, however, take five shots to get out of one trap, highlighting the benefit of the Stableford scoring system. 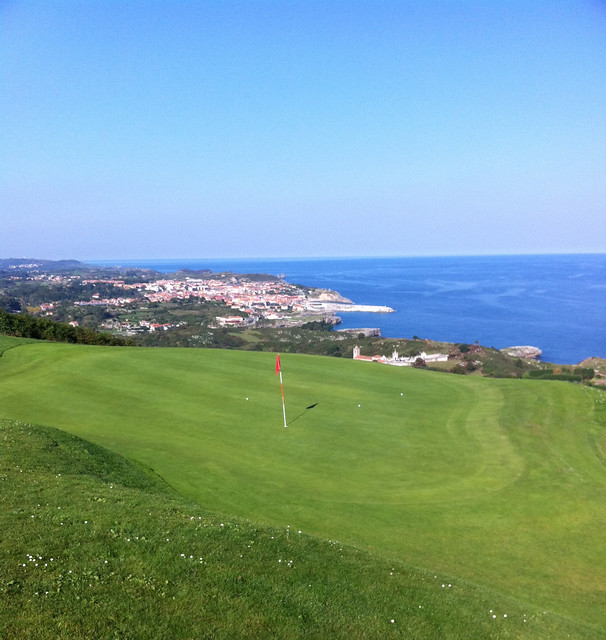 I loved the view looking down to the little port town of Llanes. Some go for holidays to Gran Canaria, but I'll take Asturias, gracias.

According to Marta, a local, the Spanish Junior Tournament was almost played here, but because the back nine (the original nine, from back when it was just a nine hole course) was in such bad shape, they chose another venue. As a result, the back nine was undergoing serious reconstruction, leaving us with some awkward tees to hit from and some very tiny greens to play to.

On the back nine, Marta caught fire. She's a 14 handicap (I'm a 15) and she was one over par on the 15th tee when her father showed up. He watched her expertly play 15 and 16, parring each. Then her mother showed up, resulting in two bogeys to finish with a 39 on the back. At this point, I asked to confirm how hold she was, and it turns out she's only eleven! Apparently she has an older sister who is fourteen who has a six handicap! Wow!

I managed another birdie on the back, and left my birdie putt on 16 one centimeter short. On eighteen, I mishit my drive, but ended up nicely in the fairway with some trees to go over. For most of the day, I was getting lucky with finding my ball in better condition than I expected. I nailed a 95% pitching wedge which bounced short of the green and then up to a front pin, leaving a ten footer. I drained it for my fourth birdie of the day, which absolutely must be a record for me. Unfortunately, I had plenty of double bogeys to counterbalance me back to a 41 + 41 = 82. My handicap on this course was 17, which would predict an 88 (on a par 71 course), so I did six strokes better than my handicap. 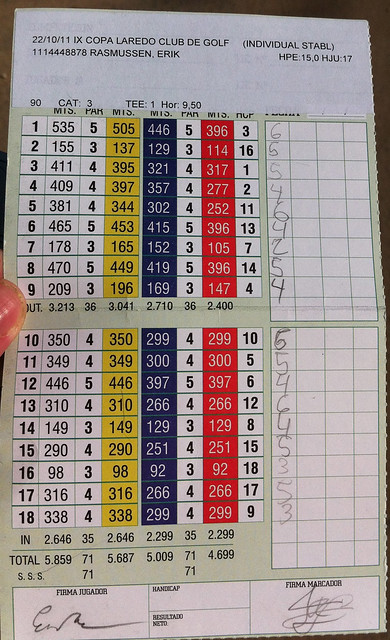 After the round, I shook hands with all my foursome and Marta's parents, and then Francisco, Javier and I headed to "the nineteenth hole" for a cold lager. I grabbed a sandwich from the bar and headed to the car for the trip back, in which I managed to not step in any Poo.

Back in Colindres, I found the house empty and my wife's mobile charging, so I headed out around town to find them. I must've walked about four kilometers around town, visiting various playgrounds, before I doubled back and found them sitting on a playground bench eating fruit. We continued to play in the playground for a bit and then walked home, stopping by the grocery store. When we arrived home, I got a call from Pedro, the captain of the Laredo Club de Golf. He informed me that not only had I won my division (skill group), but I had also won the Club Championship!!

Our club championship must have been some sort of sub-tournament inside another one, because I'm pretty sure Marta kicked my ass with her gross and net score. Nonetheless, I was tickled! I thought, well, at least they won't lower my handicap, since they need about twenty scores to do that, and I play about twice a year, but Pedro informed me that my handicap had already been lowered to twelve. D'oh! 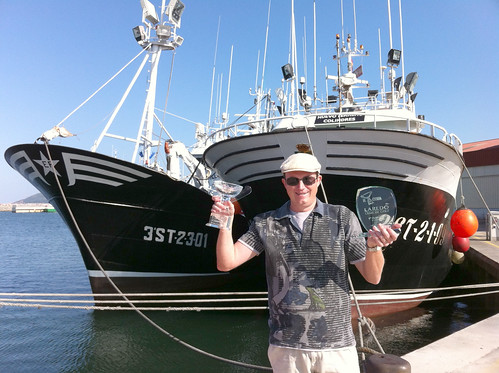 We might not have a course at Laredo Club de Golf, but we have a champion!! 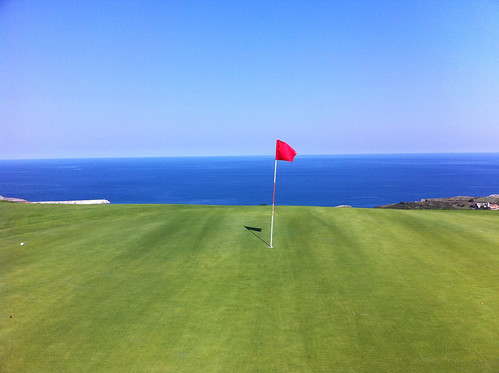