It has become very popular lately to post photos of people with profound sounding quotations without thinking about what the words actually mean. If you use Facebook or Twitter or other social sharing sites, you will undoubtedly already know what I'm talking about. It's sort of the visual internet's version of a soundbite. One thing that I find strange is that we have this wonderful medium of Hypertext Markup Language to share text with one another, and we choose to embed that text in images, which are sometimes poorly done and hard to read. As a professional working in this field who understands and cares about the accessibility and search engine optimization aspects of internet content, this practice really makes me facepalm. On the other hand, I do see where this presentation can be emotionally more powerful than simple text and a name.

Here are two particular offenders that I've seen in the last week posted by more than one of my Facebook friends. If you have posted this, I'm not directly calling you an idiot, just pointing out that, either you and I have very different ideologies, or you did something without thinking, which is something I do all the time. If you still believe your support of the statement to be valid, then by all means explain yourself in a comment. 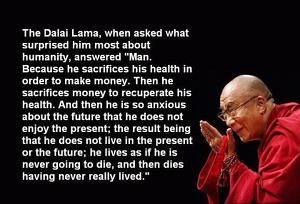 The Dalai Lama, when asked what surprised him most about humanity, answered, "Man. Because he sacrifices his health in order to make money. Then he sacrifices money to recuperate his health. And then he is so anxious about the future that he does not enjoy the present; the result being that he does not live in the present or the future; he lives as if he is never going to die, and then dies having never really lived.

He's saying, in terribly fragmented sentences, that what most surprises him about Humanity is that we plan and worry about the future and strive for wealth. Seriously?

My friend, Lance, who re-posted this in order to mock it, nailed his comment. I'm paraphrasing, since I can't find the exact comment:

I get the whole romantic Carpe Diem, "dance like nobody's watching", vibe, which is great, but no one actually does that. The very reason our species has become so dominant is that we, unlike all our furry planet-mates, developed the capacity to not live solely in the present.

There are people who have suffered brain damage and specifically lost their ability to form memories and plan for the future, and no one would call that state the pinnacle of human existence. In fact they require constant care and attention (which requires wealth that the Dalai Lama would prefer that we not have saved up for a rainy day). The Dalai Lama himself is so concerned about the future that he's discarded the millennia-old tenet of his religion about how the Dalai Lama is reincarnated throughout history, and wants to appoint a successor before his death. The irony of his power play is that by discarding the reincarnation doctrine, he's also discarding his entire claim to authority. That's the problem with Religion's trick of setting the standards just out of human reach and claiming that past dead leaders really did attain those standards (e.g sinlessness, enlightenment, etc.). Present day leaders can't possibly live up to them, and are destined to appear as hypocrites. I could say that what most surprises me about the Dalai Lama is that, as a leader, he's such an egotistical control freak, but I won't…because that's so incredibly human of him. 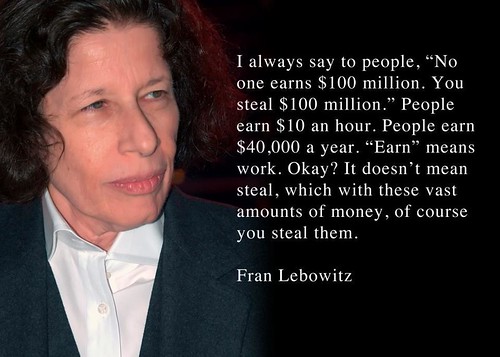 This sounds very clever and empowering at first glance, particularly in the midst of the present Occupy Wall Street movement against bankers. Believe me, I'm very much in favor of Wall Street reform and taxing the billionaires at a much higher rate than the rest of us, but this statement, after a little thought, is absolutely ridiculous. It's logical conclusion is not a place I want to live.

Bob is working hard at his sweat-inducing factory job earning a $40k salary. One day, Bob realizes that the weather hasn't been very good this year, and, having grown up on an apple orchard, knows what that means. So he goes down to his local farmers market and, at the opportunity cost of foregoing some of the pleasures his $40k-earning colleagues enjoy, buys up as many barrels of apples as he can afford. Sure enough, when harvest season comes along, there aren't many apples on the store shelves, and the price shoots up. Bob then backs his pick-up into the farmer's market and starts selling his apples that he bought at the original price at this new elevated price. According to Fran Lebowitz, any profit he has made merely by foresight and thought has been stolen! She doesn't specify from whom, but I assume she means that Bob should apologize and give that money back to society.

John works with Bob at the factory and also earns $40k sweating away his 40-hour week. One particular part of the manufacturing process at his plant has always struck John as particularly laborious, and he's certain there's another way. While his coworkers are out at the pub most nights, John stays in his garage at home tinkering with his workshop. After years of refining his design, he patents it and starts up a company to market it. What he's designed is a piece that can be fit onto one of the machines at his factory to make the process much more efficient so they can produce twice as many units per day. His device, which costs only $50 to manufacture, will save his ex-employer, and thousands of similar factories around the country, at least $5,000 per day. How much should he charge them for the device? Fran Lebowitz would suggest that charging any more than what it costs him to pay his $40k/year employees to manufacture the device would be stealing. WTF, Franny?

The worst thing about this Lebowitz quotation is that it leads logically to exactly to the "no incentive for innovation or hard work" communist hell hole that the Conservatives think all Liberals are trying to take us to with "class warfare". Passing this stuff around only hurts the Liberal cause. 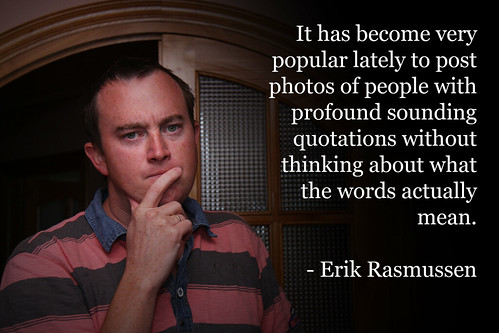 I totally stole this idea from Dustin Timbrook, the artist that did this masterpiece.

To conclude, I'd like to state that I enjoy these little quotes as much as the next social network addict, and some of them are really good, thought-provoking and important to spread. And the social networks have done an excellent job in facilitating the spread, haven't they? Zuckerberg's term is "frictionless sharing". I just wish that people would put some more thought into whether or not they really want to support a statement before hitting "Share".