The Economy and Elections

A few years ago, I came to the realization that modern two-party democracies are like pendulums. Just as gravity will pull a pendulum down towards the center, building up enough momentum to push it to the other extreme, so human voters' innate human ability to find something to be upset about will pull their votes away from one party and build up enough momentum until the other party has a majority. Rinse and repeat. Spain's democratic pendulum, for instance, has an enormous amount of momentum at the moment and is about to swing back to the political right. There's really very little that either party could do at the moment to change the outcome of the election on November 20th.

Recently I read an article by Washington Post columnist, Ezra Klein, about some research into the forces acting on this political pendulum. He cites a paper written by Larry M. Bartels, of Vanderbilt University, entitled Ideology and Retrospection in Electoral Responses to the Great Recession. Here's a bit of the abstract, although the entire paper is worth reading:

My analyses suggest that voters consistently punished incumbent governments for bad economic conditions, with little apparent regard for the ideology of the government or global economic conditions at the time of the election. I find no evidence of consistent ideological shifts in response to the crisis, either to the left or to the right, but some evidence of electoral responses to specific fiscal policy choicesâ€”most notably, a boost in incumbent governments\' electoral support associated with spending on economic stimulus programs.

I have long since been irked that voters don't vote based on issues, and now this paper has made me even more cynical about the knee-jerk thoughtlessness of the electorate. Apparently, when we are all averaged out, we tend to vote with the simplest of algorithms: 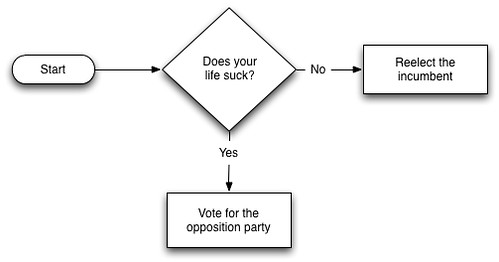 And what is the best indicator of whether or not the average voter's life sucks? That's right! The Economy! Check out these depressing charts from Bartels' paper...

You can think of the x-axis as being how well the economy is doing, and the y-axis is how well the incumbent governing party did in the election. 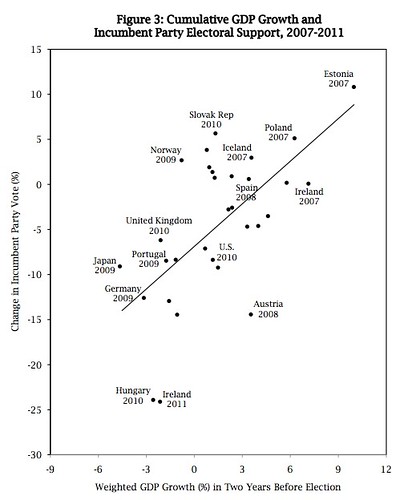 What the incumbent government does during the crisis can have some effect, however. For instance, if there is some stimulus spending, they can soften their inevitable decline a little bit. But the absolute worst thing a government that wants to stay in power can do during an economic crisis is to cut spending. Behold: 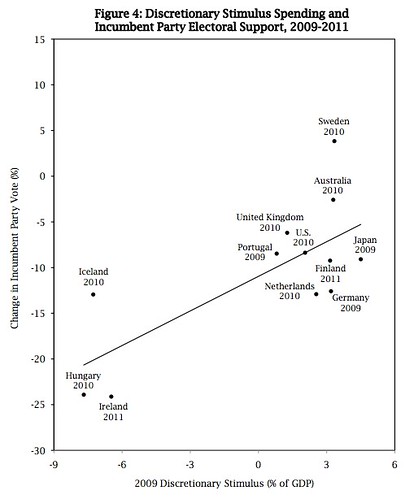 Surprise, surprise! What do the Republicans in the US Congress – who have, on more than one occasion, mentioned that their primary goal is not to better the nation, but to defeat Obama in 2012 – want more than anything? To cut discretionary stimulus spending! Republicans are such political geniuses. Of course, they have to be, since their ideology tends to screw the majority.

I really wish, more than anything, that, as I get older and incrementally wiser, I could find reasons to be less cynical about politics, but that just isn't happening. Can anyone see anything to be optimistic about in this data? This strong correlation between the economy and government turnover is, of course, terrible news for Obama. If such a charismatic leader can't buck this trend, then it really is a law of human governance.