State of the Offspring Address - October 2011

Nora has taken very, very well to her potty training that we started in June. We've had just three bed wettings in the six weeks since returning from her three-week summer vacation and going "off diaper" 24/7. We've had a few bowel surprises that weren't quite anticipated in time to "RUN TO THE POTTY!!" (an exclamation heard often lately). About once a day she lets enough drops of "pee-pee" escape to require a new pair of panties, but the outer garment almost never needs changing. Quite often, she'll head out of the room like she's going to get a toy, only to utter, five minutes later from behind a closed bathroom door, a "Poppy! Come limp my bottom!" When I enter, I find her sitting on the toilet with a gigantic, er, "creation" in the bowl beneath her.

She treats her dolls with "tender authority". If that's a mirror on our parenting, I like what I see.

Despite a concerted campaign in favor of my name being "Daddy", I am now 99.9% of the time called "Poppy" or "Papi" (same pronunciation, different language, different spelling). Even when I tell her to "Say 'Good morning, Daddy,'", she responds, reluctantly with the attitude of a 15-year-old being told to clean her room, "Good morning, Poppy." Oh well. Any points she loses there she regains in spades when, randomly when we're walking down the street, she'll burst out, "¡¡Papi guapo!!" (Handsome Poppy!).

Her ability to translate between the two languages continues to astound me. Sometimes she'll say, "Dame un vaso de leche porque tengo sed", which always prompts a "What?" or "In English!" from me, which will make her sigh and say, "Give me a glass of milk because I'm thirsty." Depending on how professorial I'm feeling, I might demand "the magic word", in which case she'll sigh again and prepend or append a "please" onto the request. The fact that both her parents can understand the Spanish and help her get the English right surely must be helping the process along. Most mornings before we leave home and I begin uttering Spanish, for politeness, in front of other Spaniards, she and I can often go the whole morning without more than a dozen words in Spanish.

Nora's big into making plans and announcing them. She will often declare, "I'm going to go look for something, you stay here." If I inquire about the nature of the object she is seeking, it becomes clear that the details of her plan have not extended that deep. Sure enough, she goes off into the other room and fires off an, "I'm coming! I'll be right there!", before returning a minute later with some object that was less than a meter above the floor and not bolted down in the next room.

She treats her stuffed animals and dolls with what can best be described as "tender authority", speaking quietly to them (always in Spanish), but sometimes taking a firm tone when the stuffed bunny rabbit isn't being still or sitting down or going to sleep like she has willed it to. I must say that if the way she treats her dolls is a reflection on our parenting, I'm very proud of what I see in the mirror.

There are times when Nora is just whiny for no reason, either she's tired or just cranky, when she will sort of "half cry" for minutes on end. She understands, when told, however, that crying without a reason is unacceptable in the company of adults and she must go to another room. Most often this is my office, since it's usually empty when I'm at home parenting. When I ask, "Where do we go to cry for no reason?", she'll respond, "The office", think for a second, and say, "I'm going to the office to cry." And she does it, too. She gets up and goes to the office, closes the door, and bawls for a bit. On rare occasions, she'll be so proud of her corralled weeping that she'll come back into the living room to proudly announce, "I'm in the office crying", with the implied, "if you guys need me for anything...", before returning to sob some more.

Last week, Nora and I were going about our normal morning routine. I got her dressed in a nice green dress, and then we went into my bedroom so that I could get dressed. She dramatically announced, "What can Poppy wear today??" While I got dressed, she performed her usual task of moving random objects between her bedroom and ours and vice versa. It's not odd for us to find our alarm clocks huddled in a circle with some stuffed animals in the corner of her room. When I was ready to go, I told her to come, and we went downstairs and out for a walk and to the store. While in the grocery store, Nora was idly playing with her dress, and suddenly Nora's friend, Tona, the fruit lady, exclaimed, "But this girl doesn't have any panties on!!" The half dozen housewives in the shop burst out laughing. Sure enough, there she was, going commando in the fresh produce section. I asked Nora where her panties were, and she said, very matter-of-factly, "At home", with a "where else would they be?" look on her face. I was barely more amused than mortified, but I made a mental note to do a panty check before leaving the house in the future. 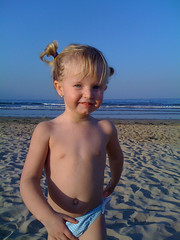 One cute artifact of her bilingualism is that she will often pronounce her consonants in English like the Spanish consonants. One day I said something like, "Look, a car!", and Nora responded, "No, Poppy, it's a carrrrr", rolling her R like the Spanish do. And then, this past weekend at the beach (yes, at the beach in October!) when we were playing in the sand, she kept asking me to "dig a hole", but she pronounced the H like the guttural Spanish J. "Dig me a jol!" She's pretty wild about going to the beach. She absolutely adores running in the sand and dancing in the surf.

She understands some general conversion rules for guessing what words might be in English for concepts she knows in Spanish. The first time she asks to draw with a pencil or announces what she's going to draw, she always says, "I'm going to pint a horsey!", guessing the English for "pintar" (to paint or draw). And when she wants something cleaned, she will often say "limp", an attempt to anglicize the Spanish verb "limpiar". Her drawings don't yet look like anything, but any persons or objects that are in her short term memory from the day before are possible subjects.

Her counting abilities are pretty minimal, but we haven't emphasized it much. She can make it to about five before she starts guessing that nine or seven might come next. There's no sense about colors yet, either. She's memorized that "The sky is blue", but couldn't do better than chance at identifying any other object as being blue. Occasionally she'll say, "That white car" or something and be absolutely correct, but further interrogation reveals it to be a lucky guess.

The last school year that Nora won't attend started in September, so the streets are delightfully childless in the mornings when I'm taking care of Nora. The side effect is, however, that everybody and their nephew thinks it's reasonable to ask Nora, "And why aren't you in school?" It's not like she's nine or something, sheesh! 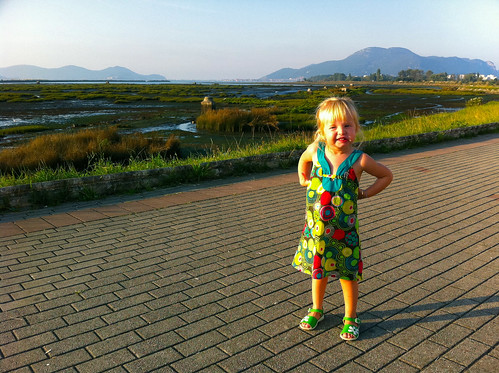