Today the weather was better than it's been pretty much all year long. The key was the noticeable lack of wind, which normally makes our beach a little chillier than one would like. That the weather is so out of season made it all the more special, since we know there won't be days like this until 2012. We decided to go to Laredo to walk around, but Nora caught wind that we'd be near the beach and insisted on taking her backpack full of buckets and shovels and things. We ended up sitting on the beach for about two hours playing in the sand, with Marga and myself in street clothes, not beach clothes. We had a grand old time. Nora, after sleeping the whole night through for the first time in – oh, I've lost count – couldn't remain conscious on the five minute ride back from Laredo, so I carried her upstairs and deposited her sand-encrusted limp body on the couch, where she slept for two solid hours. She ended up having her lunch, which she normally eats at 12:30, at four in the afternoon.

This morning, when Nora and I were on our daily outing to buy fresh bread, she asked me where we were going, and I said we were going to Lupa, the local supermarket that has a bakery open on Sunday. She then asked, "Why?" I returned the question to her to see if she knew why, and she said, "To buy bread." Quickly, I asked her the same thing in Spanish, "¿Por qué vamos a Lupa?" Without missing a beat, she responded, in Spanish, "Para comprar el pan." Amazed, I got out my iPhone to try to recreate the moment on tape, which didn't turn out quite as perfect as the original moment (does it ever?), but I thought it worth including.

Does it show that I'm proud of her bilingualism? Probably not...

Close-captioned in Spanglish, in case it's hard to understand. 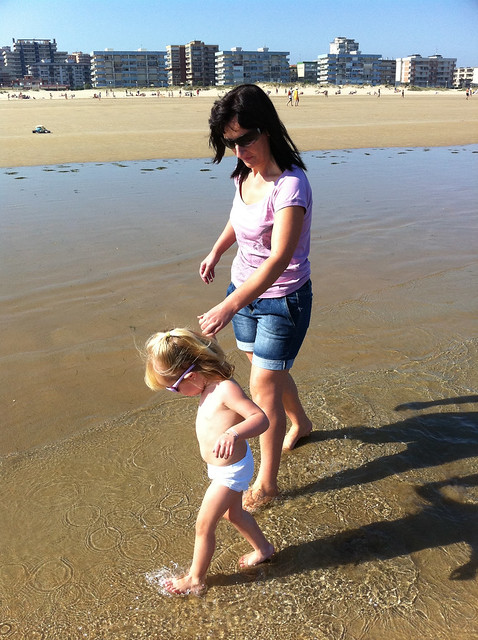 I was the only one that got sunburned.