Last weekend we went to the annual festival in Ampuero, a neighboring town of 4,000 residents. Every year, they hold a miniature version of the San Fermin festival in Pamplona, complete with all night partying in white clothes and red scarfs, a running of the bulls, and bullfighting. Of the six years we've lived here, we've gone several times. We knew from past experience that it's nearly impossible to park in a small town that's hosting three times its inhabitants in a festival, so we parked on the outskirts of town to save the time and stress of finding a closer spot. I was certain we would miss the bull run at high noon, since we left home at 11:25, but it only took us eight minutes to get there, five minutes to find parking, and twelve minutes to walk into the center of town, leaving us with ten minutes to stand around and wait for the bull run to start. Of course, if you want a good seat or even a standing view to watch the bull run, you need to stake out your spot and hour before the run begins, so we found ourselves at a big swinging metal gate, lined with people that had their shoulder-width of the gate staked out. They were going to stand on the bottom bar of the opaque gate and peer over the top. This left me with no angle for photography whatsoever...unless... Since all the gate standers would be a foot off the ground, I could lie on the ground behind them and shoot up under the gate. Low angles are famously fantastic for bull runs – you have probably all seen this viral gem. I politely informed the guy I'd be lying under of my plans, telling him to please watch when he steps down, but that if a situation occurred where he needed to get down immediately without looking, I'd understand.

At twelve noon, a firecracker sounded, just like in Pamplona, to notify everyone that the gate to the bullpen was open, then another to signify that all the bulls were out. Unlike in Pamplona, the Ampuero bull run is a circuit rather than a straight run, so they run out of the bullring, run through town, and then back into the bullring. I wasn't prepared for the rush of people, including one quintagenarian, trying to scoot under the foot-high gate clearance. This is a problem in San Fermin as well, where people will "safely" enter the bull run area just to get into the bullring without paying the entrance fee. Just before the bulls returned, a noticeable tension rose in the crowd, I ducked low on my now aching knees, my camera in rapid fire mode, and held down the shutter. Click-click-click-click! And then it was over...faster than a bicycle race. 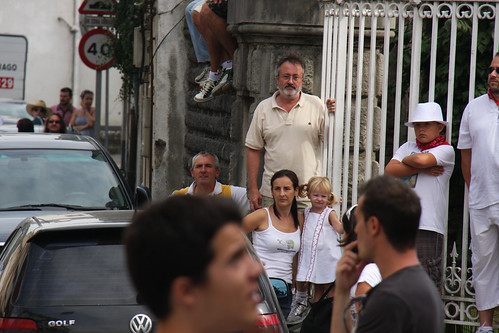 Marga and Nora stayed back, able to see over the gate to the bulls running on the slightly elevated street behind it. 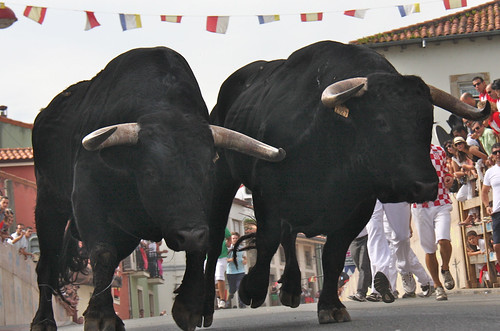 It turns out that these aren't even "real bulls". Well, they are called novillos, not toros, because they are less than three years old. Bull calves. Either way, I was happy to be on my side of the steal barrier.

They used to use full grown bulls, but then five years ago, the year before we first went, one of them escaped the barriers and killed three people. It's one thing if a runner gets hurt, but spectators have a higher expectation of safety. Truly tragic. 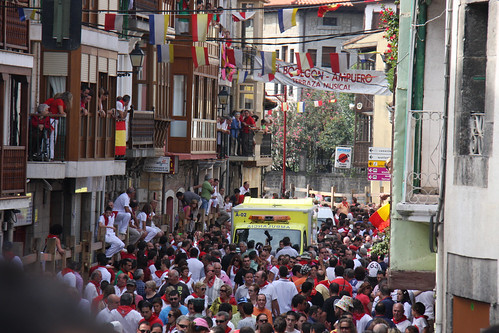 After the firecracker sounds letting everyone know that all the bulls are safely back in their pen, the people flood the streets. There was one goring; a 44-year-old veteran runner got a horn to the bum (photo here). It was on the outgoing run, and he got pulled under a barrier before the bulls came back. He was treated at the scene and then taken to the ICU. In the four bull runs during the festival this year, six people got ambulance rides. 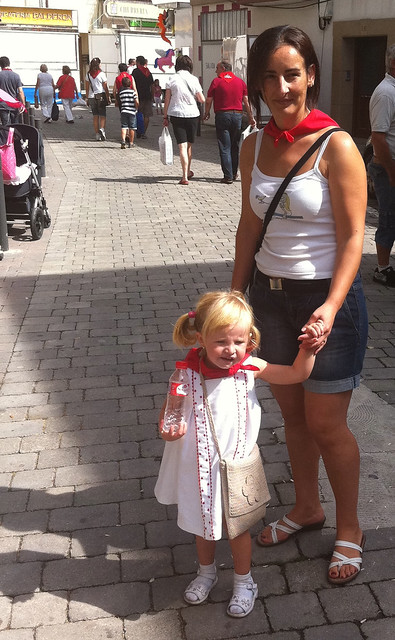 Nora had a great time seeing all the people and dancing to the music.

She particularly loved these dancing giants, which she improperly calls cabezudos (this is a real cabezudo). They are really well done, made of very lightweight materials, and controlled by an operator between their legs. If you stop thinking "This is really a puppet!" for a second or two, you really do start to perceive them as enormous dancing giants, making eye contact with them, etc. Nora enjoys them at a distance of between five and twenty meters. If they're too far, she begs to "Go see the cabezudos!" and if they get too close, she cries and buries her head in a parent's chest.

At one point, I went into a bar to order some drinks, and this group of gentlemen came in and one of them asked the bartender for a Bordón, an excellent crianza red wine from Rioja. The bartender said he didn't have any, so the customer begrudgingly settled for an Añares. The barkeep pulled out a glass, and the customer said, "No, we want the whole bottle." I smiled. They did have six or seven men in their group, and a bottle of wine falls fast with six glasses. We went outside to the street to drink our drinks. A few minutes later, the singing began.

What a glorious way to spend your time, entertaining yourself and others in bars drinking wine. From what I can tell, these are traditional Cantabrian songs. The lyrics to the last bit are:

I dream not of rich treasures, nor of war ships, I dream of white sails, I dream of being a sailor. To have a calm night, the moon as my companion, a guitar in my arms and, in my mouth, a habanera. 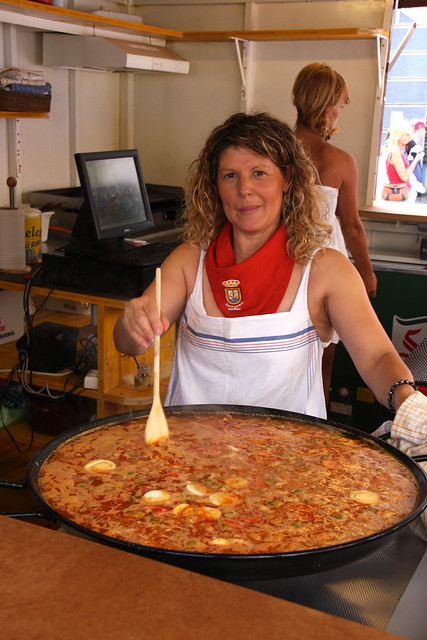 This lovely lady was cooking a paella to serve in small rations to partygoers. 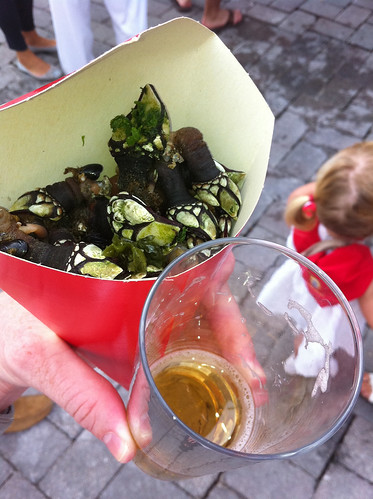 I opted to try eating goose barnacles for the second time. They were very good, but impossible to eat standing up while holding a beer, and the shells were too bulky to feel comfortable dumping on the street like sunflower seed husks, so I found a bar to eat them at. 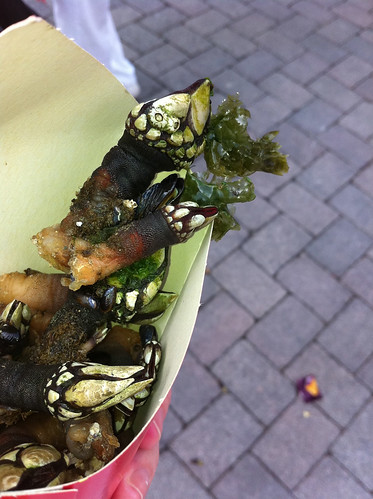 They were so fresh, they still had seaweed and tiny baby mussels on them. 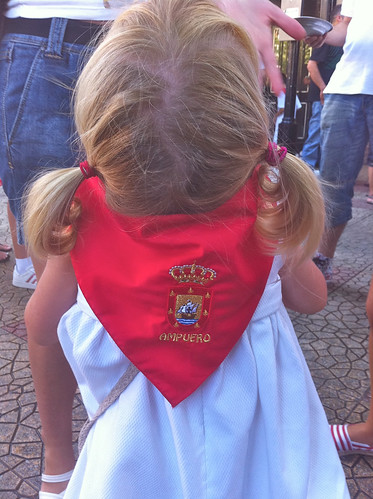 Nora demonstrates the proper way to wear your red scarf. We bought three. They are pricy, but good for many years. 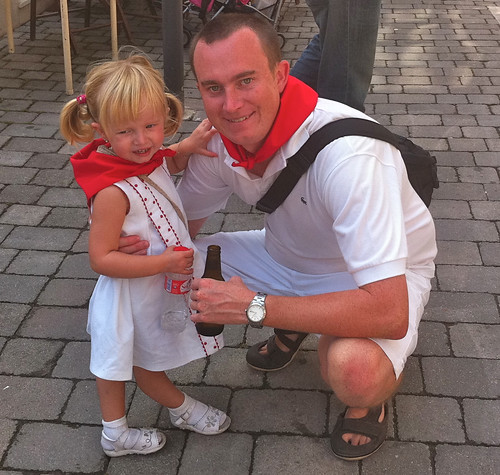 We had a great time.