I realized that it was about time to revisit my temporal compositing Photoshop project, placing Nora on the couch with younger versions of herself. It's no surprise that she has changed much less in her second year than in her first. What follows are three Noras, one at 6 months, one at 18 months, and another at 30 months. To take the 6-month-old's picture, I had to prop her up and run to press the shutter before she fell over. The 18-month-old could sit there just fine, but the 30-month-old could actually be told to keep her legs straight and put her hands on her knees to conserve horizontal space.

It's worth viewing larger. The first two pictures were slightly blurry, so I actually had to digitally blur the third one to match the others. 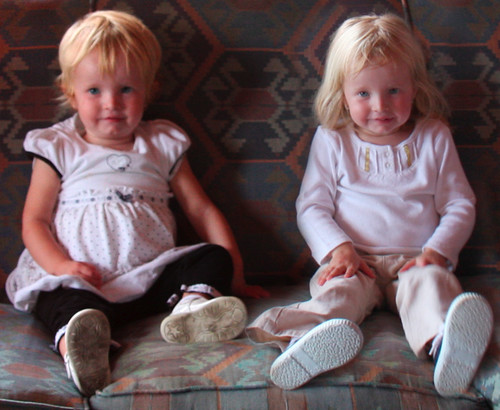 A close-up of just the changes in the last twelve months. Although she is a bit taller and her hair is longer, the biggest changes have happened between her ears.

Looks like there's one more spot on the couch for a 3.5-year-old...