The word Sevillana, pronounced "seh-vee-YA-na", can refer to several things. It can be an adjective to describe a woman or any feminine noun from Seville, Spain. It can refer to a particular kind of folk music from Andalusia, or a particular four-part dance that originated in Seville. Like for other Spanish dances like the pasodoble, it doesn't require much imagination to see that the movements in a sevillana dance are meant to mimic bullfighting, with the dancers gracefully passing buy each other without touching. The whole closeness without touching aspect of it makes it quite sexy. The fourth meaning attributed to the word Sevillana in my mind is to refer to the style of flamenco dresses worn in Seville during the Feria de Abril (April Fair). They are very colorful and frilly. Cheap knockoffs are sold in local town markets across Spain as costumes for children. Last month, for fun, Nora's abuela bought her one, complete with plastic castanets, bracelets, hair combs and clip-on earrings. She also got some high heeled flamenco dancing shoes to go with it. Nora loves to wear the outfit and asks to most days. 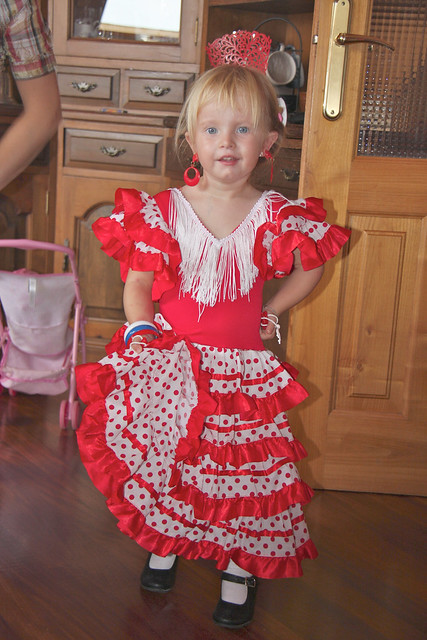 I guess you could call these her "Sevillian clothes", eh?

If I lived in Seville, I'd make that joke at least once a day.

What follows is a video of my wife dancing Sevillanas in a dark dance club in Madrid five years ago. She doesn't really know how, but she's an excellent faker, and her partner is a talented Sevillana dancer. We'd both like to take some classes sometime.