If you live in Spain, there is one question upon which you absolutely must have an opinion: Are you a Barcelona or Real Madrid fan? You can be a fan of your local team – Go Racing Santander! – but you still have to pick a side between the two rival fíºtbol supergiants.

Most Spaniards have some emotional connection to one of the two cities, or sometimes team loyalty is passed down from generation to generation, but for a foreigner like me, I've got nothing to go on, so I've had to think about which side to choose. By just about every measure, I come firmly down on the side of...

F.C. Barcelona has never had a corporate logo on their jerseys. In 2006, they made an agreement with UNICEF, but rather than the sponsor pay the club to wear their name, the club donates €1.5 million per year to UNICEF. 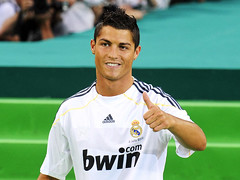 F.C. Barcelona and Real Madrid have the two best soccer players in the world, Lionel Messi and Cristiano Ronaldo, respectively. Ronaldo is pretty; he comes out onto the field with styling gel in his hair. He reminds me of all those good looking jocks that got all the girls and were so mean to me in high school. From interviews and reading general news sources, it seems like his ego matches his physique. He's a sex symbol and he knows it. I just plain don't like him. 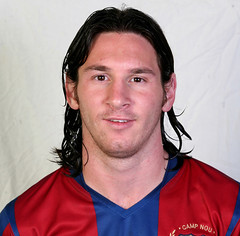 Lionel Messi, on the other hand, can best be described as well to the ugly side of ordinary. He's handsome like a cubist painting, his hairstyle matches his last name, and his attention to style and looks is even lower than mine.

While I don't know that much about Messi's personality, I have seen a few interviews, and he just generally seems like a much better person that CR7. Oh yeah, Ronaldo has a moniker, his two initials and his jersey number. Did I mention that Ronaldo was named after Ronald Reagan?

I have the same feelings about the two long haired stars of both teams. Carles Puyol, for Barcelona, is one ugly long-haired freak, whereas Madrid's Sergio Ramos has a much more symmetrical face. There's just something about Ramos' gestures and attitude that I find unsettling. And don't get me started on that stupid headband he wears! Why anyone would choose to play any sports with long hair not completely immobilized in a pony tail is beyond me. The truth is that I'm not all that fond of Puyol, either, after he insisted on carrying his regional Catalonian flag around the field after winning the World Cup for Spain instead of the Spanish flag, so I won't award any points for this particular topic. 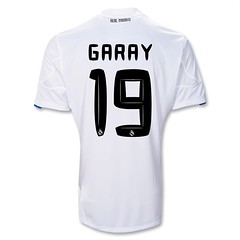 Every time I see Real Madrid play, the overly rounded nature of the font on their backs annoys me. It's not completely illegible, but nor is it very easy to read. Both commit the same crime with the upper-case N being just a tall lowercase n, but I think you'll agree that the font on the bottom is much cleaner and attractive.

The fact that the Real Madrid letters R and A are so nearly identical wouldn't be too much of a problem, except that they have a player named Ezequiel Garay, who looks like he has "GAAAY" written on his back...which isn't bad for suggesting homosexuality so much as for juxtaposition of identical-looking letters.

I could go on about what a jerk Real Madrid's coach, José Mourinho, seems to be, like how he put his thumb in someone's eye last week, but I won't. The truth is that it's impossible to talk to a Spaniard about this topic without them being strongly biased one way or the other. All the features of ingroup/outgroup human tribal psychology are present in this debate.

Fans of Barcelona claim that the refs never call fouls on Real Madrid, and tout confirmation-bias-laden conspiracy theories about how, "Isn't it curious that the television broadcast never shows slow motion replays when a Real Madrid player gets away with a foul?" The Real Madrid fans are equally livid about the preferential treatment they think Barcelona receives.

I must, however, concede one good point to a Real Madrid supporter friend of mine who I once heard say, "Whenever Messi does a fancy maneuver with the ball, everyone says, 'Wow, what an amazing player!', but when Ronaldo does one, everyone says, 'What a bloody showoff!'" I can see how that would be annoying, but it's all part of the image he's created for himself. The animosity between the fans is sharp! There are several people with whom I refuse to watch soccer matches anymore because they get so vitriolic.

So, to conclude, I root for F.C. Barcelona whenever they are playing against Real Madrid. Believe me, I am acutely aware of just how superficial my reasons are. They are meant to be. It's just a bunch of millionaires kicking a ball around in the grass. 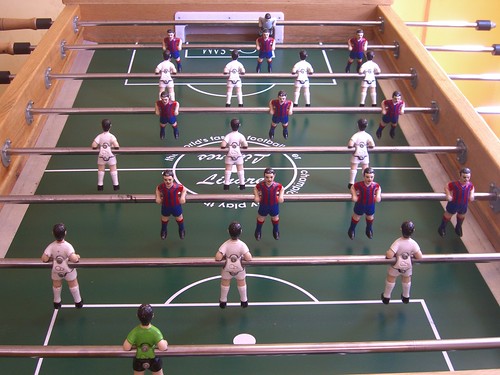