This rant has been near the surface for several years now, but a news report on television yesterday set me off, and I need to write it down to get it off my chest. Let me be clear. It's not that Spaniards are stupid or generally bad drivers, the problem is that they are taught wrong at driving school! Believe me, I know, because I had to go to Spanish driving school to get my Spanish license.

In Spanish driving school, the students are taught that, when circulating in a roundabout you should always be in the far outside lane no matter which exit you are planning on taking. How ridiculous is that? Any driving student with half a critical thinking neuron should raise their hand and ask, "Then what are the other lanes in the roundabout for?" But no one does because the authoritarian Spanish school system has extinguished any such behaviors.

I've lost track of the number of times that I've narrowly escaped an accident when trying to exit a roundabout from the inside lane and somebody is trying to keep going around the roundabout in the outside lane. I suspect that if we were to collide, the authorities would rule the accident as being my fault.

This brings me to what I consider to be a fundamental flaw of roundabouts, specifically roundabouts with two-lane exits. 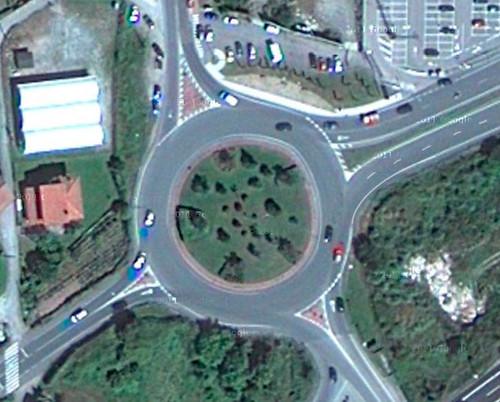 Please focus only on the northeast exit in the image above, and the red and black cars approaching it. Follow my logic here:

The conclusion #3 is a necessarily consequence of the premises #1 and #2. 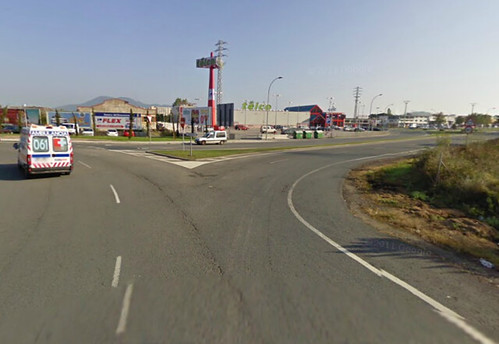 This is the same roundabout exit, as seen from street level. If you're in this lane of the roundabout, can you continue on around, or must you exit? Does it depend on whether or not there's a car to your left that wants to exit? Who yields? Argh!!

Personally, I am utterly dumbfounded that more traffic accidents don't happen in roundabouts. The whole scenario seems so chaotic, and the proper rules can't account for every situation, not to mention that they don't even teach the proper rules in driving school. But somehow there is an emergent behavior of the system and swarm intelligence takes over to avoid accidents and make roundabouts safer and more efficient than they seem at first glance.

UPDATE [Jan 21, 2015] – Someone has invented a new kind of roundabout that solves these problems. Presenting... The Turbo Roundabout