This past weekend my town, Colindres, celebrated its Second Annual Beer Festival. We went only one day last year, but this year we went all four days. I had a total of 3.5 liters of beer in seven half-liter (Â±1 pint) mugs. They also had liter steins, but I couldn't bring myself to buy one. Plus, I subscribe to the "smaller servings is better" beer philosophy of my adopted country. In Spain, when you walk into a bar and order a beer, you have to choose between large and small, which correspond to a half-pint and quarter-pint respectively. To someone from the US or northern Europe, these sizes are ridiculously small. Spain, however, doesn't have a lot of beer culture. People drink mediocre lager (which is still way better than the US mega-breweries Miller, Coors, and Budweiser put out), and very little else. The quarter-pint beers, it turns out, are particularly handy when you are planning to hit 7 or 8 bars on a particular outing (which is not unusual), as such endurance cannot be achieved by mortals when drinking pints. Ordering more, but smaller, beer servings also means that your beer is colder; the last sip of a pint has had time to warm up since leaving the tap, but the last sip of a half-pint hasn't been out of the tap for so long. In conclusion, a festival serving pints and double-pints is strange to Spaniards, and there were many couples that opted to share a single pint.

The beer festival this year had a selection of three beers: rubia, tostada, and de trigo. That's blond (lager), toasted (brown ale), and wheat beer. Over the course of the three days, I tried them all. The lager was very watery and not very good. It later became clear to me why, when I saw them pouring it from a tap of Fosters. Blech! Fosters sucks. Ask an Australian, they don't actually drink it in Australia; they just export it. The brown ale was Affigem Dubbel, a decent Belgian brand, and the wheat beer as Paulaner, a Munich-based German brewery. After tasting my wife's lager and having a half-liter of the other two, it quickly became clear that the Paulaner wheat beer was my favorite, and I stuck with that for the remainder of the festival, especially since wheat beer on tap is very rare in Spain.

A half liter of beer cost 3.50€, plus a 2€ deposit on the mug, which was returned to you when you returned the mug. A 0.25L glass of lager in any local bar is between 1.20€ and 1.30€, so the festival beer was a little bit more pricy, but it was fun drinking from a big mug, and they had some pretty good live music, which was so loud that it could only be reasonably enjoyed from outside the tent. One of the bands was an excellent Beatles tribute band. 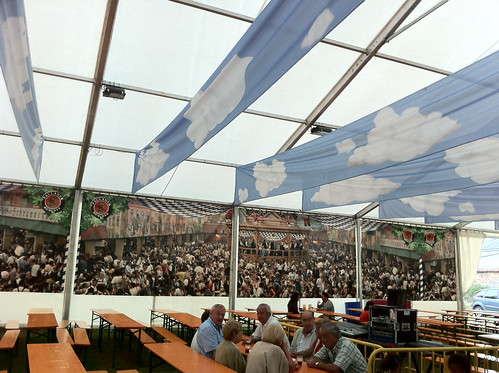 The decoration was nice, with scenes from Oktoberfest on the wall and some faux clouds overhead in the tent. I've seen the Oktoberfest hangings in other festivals. The tent was packed on all but the last night, when this photo was taken. This year seems to have had much more success than last year. It's nice to have a beer festival you can walk to from home. It sure beats shopping for last minute cheap holidays to Munich for Oktoberfest. Especially since our friends in Munich, who will eventually have to deal with us crashing at their place during Oktoberfest, were inconsiderate enough to have a baby due in the middle of the festival this year. 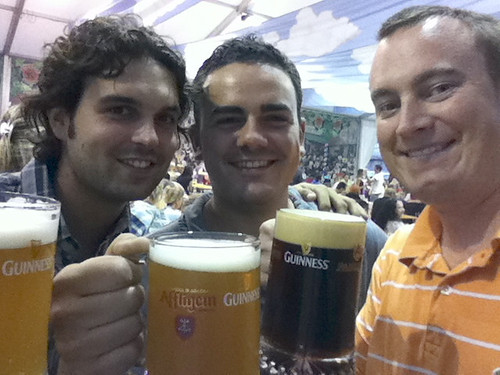 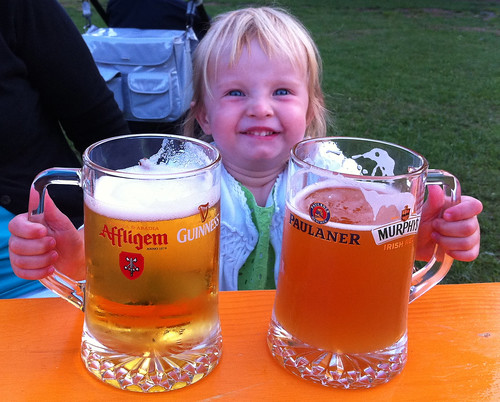 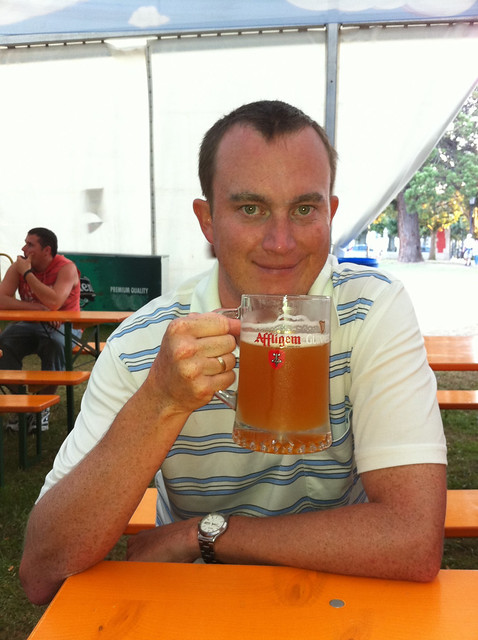