On July 4, 2011, my country's 235th birthday, my family and I visited Tweetsie Railroad, in Blowing Rock, North Carolina. I would be the first to agree that the name sounds like some sort of social networking app (and they might do well to unload tweetsie.com before the bubble bursts), but Tweetsie Railroad is actually a "Wild West theme park", from back in ye olde days when theme parks actually had themes. The primary attraction since its opening in 1957 has been an old coal-burnin', steam-tootin' train engine that takes visitors around a three mile track. When we told people around my home town that we had gone to Tweetsie Railroad, the first question everyone asked was, "Do the Indians still board the train?" To spice up the original train ride, actors perform a staged train robbery, where the cowboys have to victoriously fight off the savage gold-robbin' Indians. The answer is, "No, the Indians don't board the train anymore, but the overweight actors pretending to be cowboys do fight off some other white actors in face paint and wigs pretending to be Native Americans." It's not remotely politically correct, and I assume that it will continue to change, especially since the kids born in the Obama administration don't watch nearly as many Wild West shows on television as the kids born in the Eisenhower administration.

My favorite parts of Tweetsie Railroad when visiting it this time were the same as when I visited it as a child: the petting zoo, the chair lift, and the train ride...in that order. Despite being a little below the target age of the theme park, Nora had an absolutely spectacular time. If we hadn't pulled her away, she would've loved to just ride the carousel all day. The look of awe and wonder as we did each new activity was so refreshing to see. One of the best joys of parenting is to vicariously rediscover the world through your child's eyes. 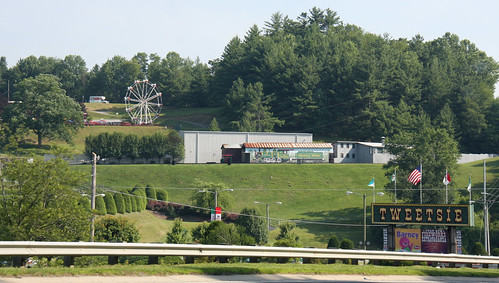 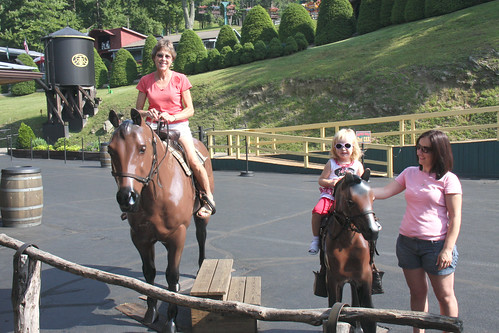 She loved riding these plastic horses. And Nora did, too. 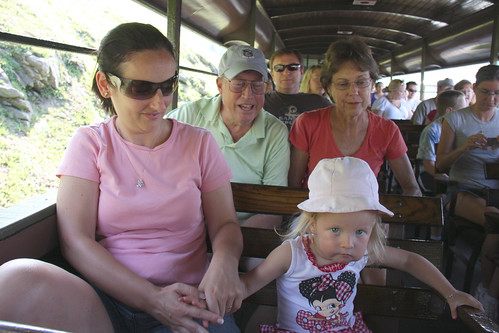 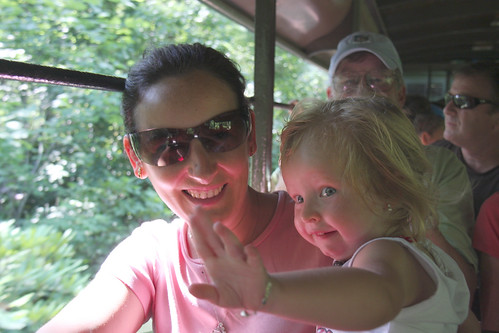 Nora enjoyed the train ride a lot. Since it's a real coal burning train, the conductor warned us before leaving the station that we had to be careful that falling embers and ash might enter the train, and to wear sunglasses if we had 'em. Sure enough, ash did blow a bit into the train, but it was nothing a little brush of the shoulder couldn't remedy. 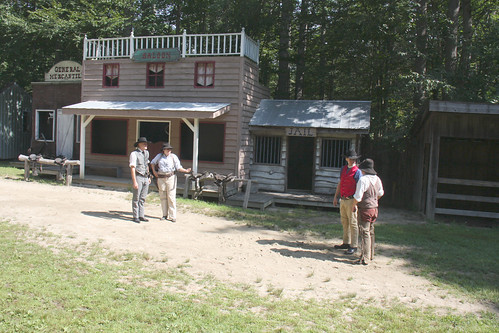 Very, very amateur cowboy actors did a bit of a George and Lennie routine. The general plot was that the moron outlaws, with intentions of robbing the train, got caught by the moderately competent law enforcement, but they had to be released temporarily to band together in their whiteness to fight the attacking Indians. 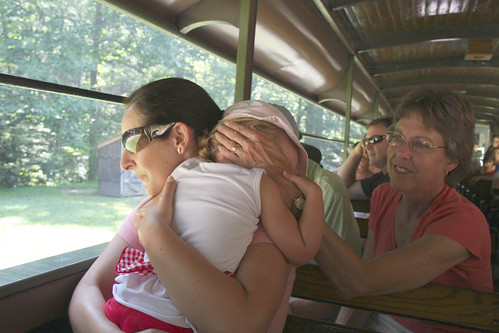 Nora hated the guns. They were really, really authentically loud. It seems to me like they could make the show just as entertaining without being such an aural assault. 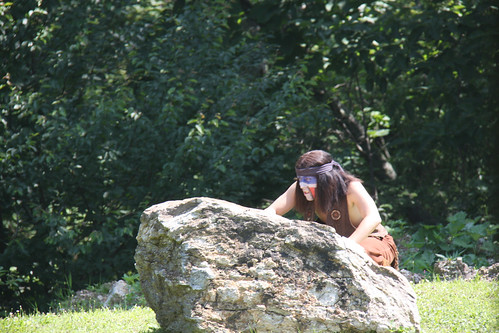 Oh no! A white guy with his face painted red, white and blue on July 4th! A brutal savage or a member of the Tea Party? 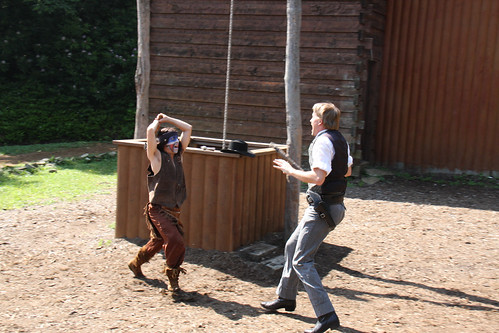 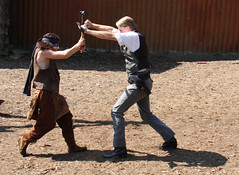 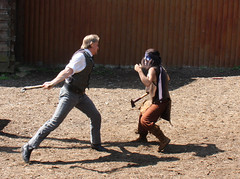 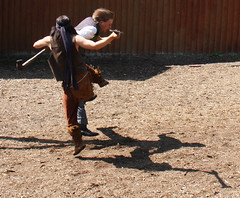 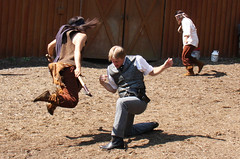 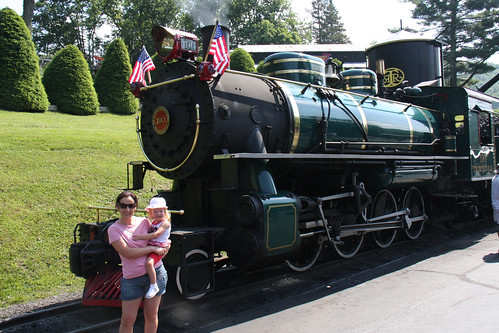 The engine is a beautiful machine, I must admit. 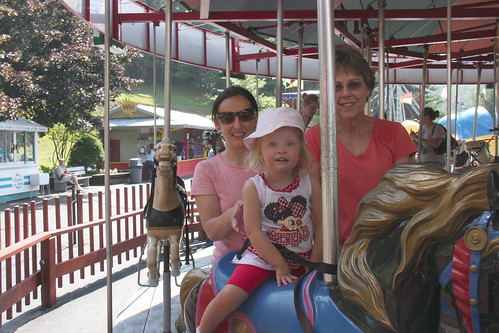 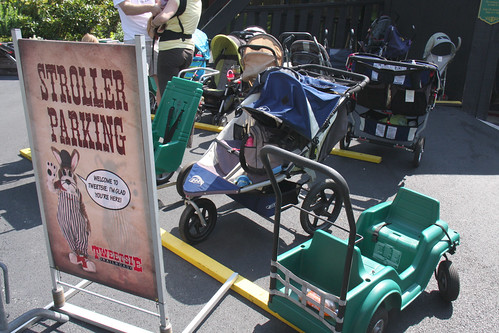 This made me chuckle. To take the chair lift up to the upper part of the park, we had to leave our stroller down below. 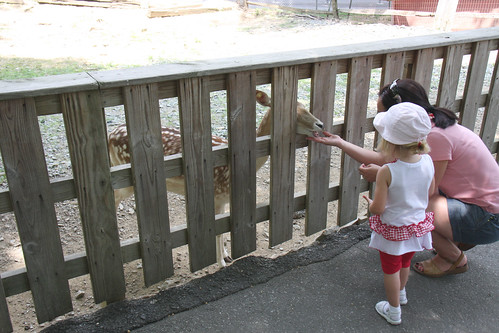 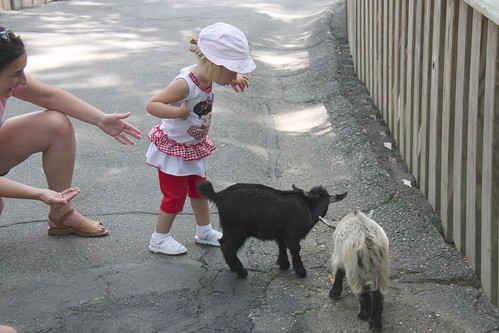 And even better: Baby goats!! 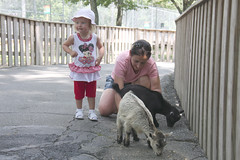 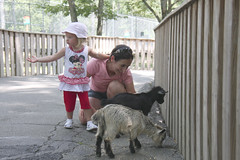 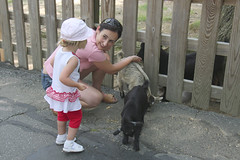 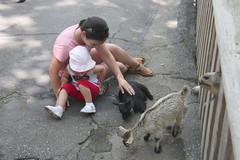 Nora couldn't quite get up the courage to let one eat from her hand, but she enjoyed petting them for 0.5 seconds at a time. I kid you not. 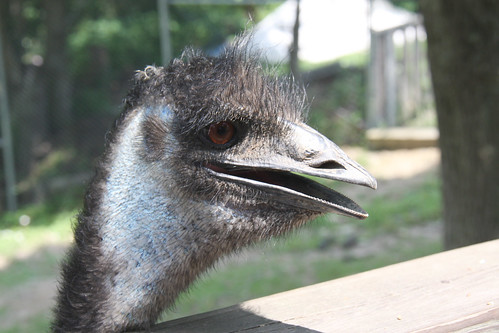 Not quite a Galapagos cruise, but there were some pretty bizarre animals you don't see every day. 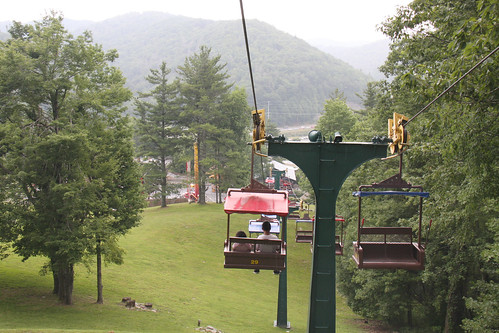 When we were eating some hotdogs and pulled pork sandwiches, a thunderstorm arrived very quickly, so we got to ride down the chair lift in the somewhat-sideways rain, accompanied by not-so-distant thunder. I really enjoyed the chair lift. I would've enjoyed just riding it up and down a few more times. 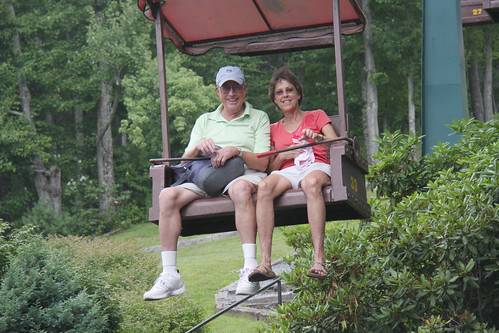 My parents liked it, too. 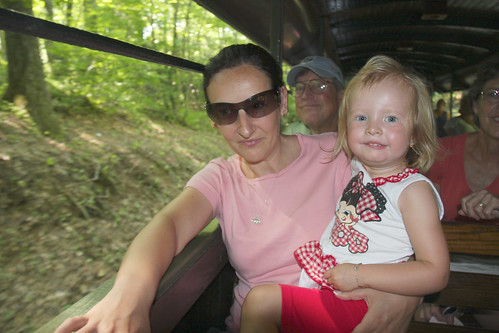 All in all, I think we had a wonderful time and can't wait to go back in the coming years when Nora is a little bit older. She fell asleep just as soon as we got the car in gear and slept all the way back down the mountain to my parents' house.