Nora continues to excel lingually in both English and Spanish. Oh, wait, she didn't used to. Her English got a much needed boost on our fortnight (a flight attendant asked why we were going for only four nights) visit to the United States. When we arrived, she was speaking about 20% English, and when we left, she was using English about 90% of the time, even with her mother.

As parents often do, I had high expectations for her to not confuse the two languages upon returning to Spain. However, she did, in fact, speak a few sentences to her abuelos in English. I had to teach my mother-in-law that "me too" means "yo también" and what a "potty" is. She said, "Oh, I'll remember that for sure, since my pharmacist is named Poti." A few Nora-centered anecdotes for you...

One day when I went in to wake up Nora, I opened the window blinds and she sat up in her crib, rubbed her eyes, and said, "I want to get out." I said, "Okay, you want to get down?" She replied, "Not down, out!" 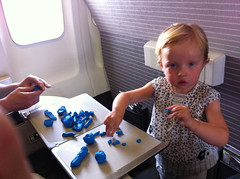 That night, I was awakened by Nora shouting, "Noooooo! Daddy nooooo!!!!" Startled, I sat up and headed quickly to her room, but she soon continued, "No, Daddy, the cookie is for Mommy!!" I smiled and headed back to bed. Even toddlers dream of conflicts.

The following day when I went in, the first thing she said was, "Is Mommy working?" I replied in the affirmative, and she said, "To make money?" I've since taught her another step in the capitalism chain, that money is "to buy things for Nora".

We've been a few weeks now without using diapers during the day. It's been going surprisingly well so far, but we still have some accidents. When she's at home, she's often bottomless if not completely naked. She's going through a "clothing is cramping my style, man!" phase. This morning, she got really still and serious. Just as I was about to suggest she head for the potty, she let out a loud fart. She was clearly relieved, but in a split second, some doubt spread across her face and she turned around and looked at the ground behind her to make sure it had been only gas. Cute, but later in the day we weren't so lucky.

What follows is a pretty adorable video of me interviewing her about the rain outside, again. I ask her specifically about going "to see Tona", the fruit lady at the local grocer who is best buds with Nora. In retrospect, I can't believe I didn't understand her pronunciation of "a kiss". She's still sporting a lovely braid in her hair that her favorite daycare provider, Nella, did for her the day before. Nella is the only one that can braid her hair.