by erikrasmussen, on Flickr")On July 3, 2011, we attended the wedding of my childhood friend, Charley Coffey, to his beautiful bride, Christanne. Due to the separate courses our lives have taken, I had never actually met Christanne until the wedding. Both of them are incredibly photogenic and every photograph of them looks like it should be on an orthodontist's wall. They are both medical doctors at the end of their schooling, primed to stop living like students and start living like kings in San Diego, the city said to have one of the best climates on the planet. I couldn't be happier for them. Everyone at the wedding was very nice, the North Carolinians from the groom's side as well as the South Carolinians from the bride's side. Charley was one of two other students that went with me from our hometown high school to a two-year boarding school in Durham called the North Carolina School of Science and Math. Living like sardines in a boarding school at age fifteen is a recipe for bonding like no other. Just as I am still good friends with (and work with) several of the people that were randomly selected to live on my dorm hall there, Charley had three of his hallmates as the groomsmen for his wedding, some fifteen years after we graduated and all went our separate ways. I enjoyed talking with my fellow alumni, Will, Jason, and Gabe, like any high school reunion, discussing the paths our lives took since they diverged.

The wedding was held at Crestwood Inn in Boone, North Carolina. It was a lovely location, with a great lawn overlooking the rolling blue ridge mountains, an ideal spot for a wedding. My parents, wife, daughter and I stayed there two nights. We had a nice little cottage with two double bedrooms and they provided us with a crib for my daughter. They weren't exactly Tuscany villas, but they were perfect for our needs. Marga got a massage at the local spa that was so relaxing, she had to lie down for four hours. I'm not sure massages are supposed to incapacitate you like that, but she enjoyed it.

A couple weeks before the wedding we got a call from Crestwood Inn telling us that the bride had requested that someone else be placed in our cabin and that we should find lodging elsewhere. It was a little annoying, but we respected the bride's power in organizing her wedding. When we told our friend Tom, the father of the groom, he investigated and discovered that it had not been "the bride", but "a bride", a bride from another wedding!! Tom called Crestwood and gave them an earful and got our room back. It was a good lesson in the important distinction between definite and indefinite articles.

All of my photos can be found on Flickr, but I'll share a select few with you below. 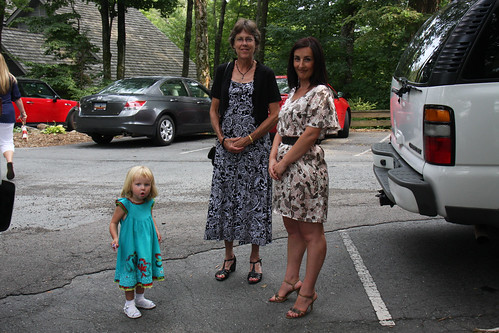 The three most important women in my life, my mother, wife and daughter, all spiffed up in formal wedding attire. 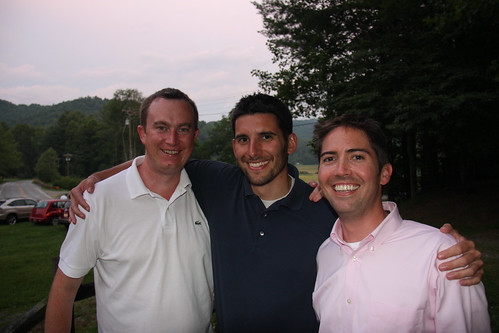 My lifelong friends Jacob and Charley were born the same week in the same maternity ward. I was born in an adjacent state a month and a half later, but started preschool with them at age three. We've been best friends ever since. Even though I don't get to see them very often, it's nice to know they're out there. 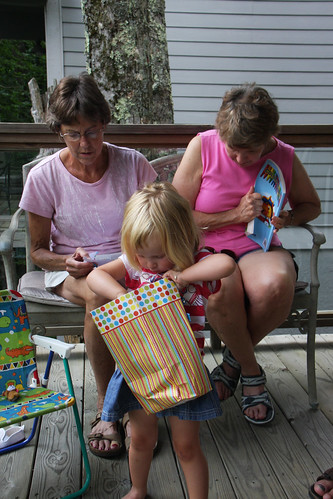 Nora – and all the youngsters - got a gift bag from Geneva, Charley's mother. 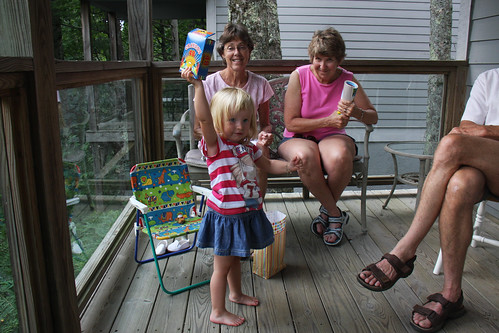 We told her to "hold up the crayons to show Daddy", and she took us a little too literally. 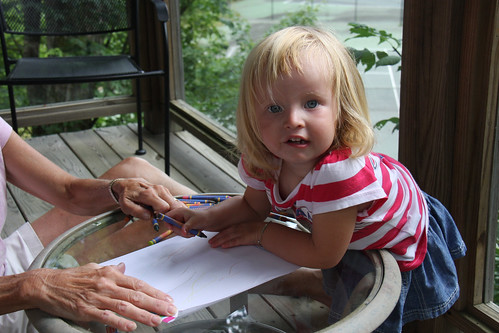 Nora drew a picture for Charley and Christanne. It mainly consisted of squiggly vertical lines of various colors. 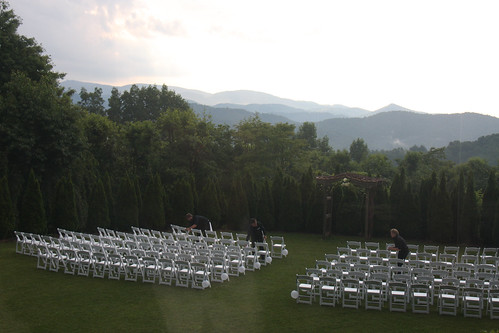 The venue was gorgeous. The wedding was scheduled for 6:00 PM. At about 5:30 PM, it started pouring down rain. Luckily, the bar was open and began serving free beer and wine at 6:00 PM, so the guests were mollified until the storm could blow over. In the photo above you can see the Crestwood staff drying the seats with towels. When we did eventually file into our seats, each guest was given a spa towel to put on our chair. The ceremony actually took place closer to 7:00 PM, and the weather at that point was absolutely gorgeous. The rest of the night was a lovely temperature and we were treated to flashes from distant thunderheads. 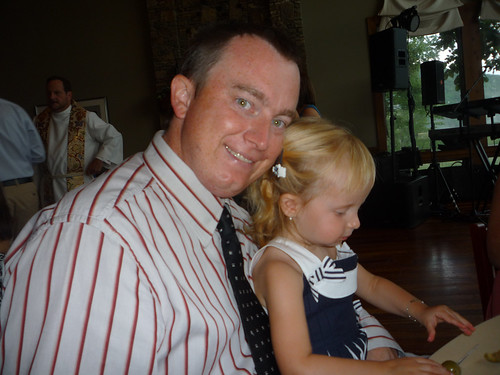 Waiting for the wedding to begin. Nora ate at least a dozen martini olives. 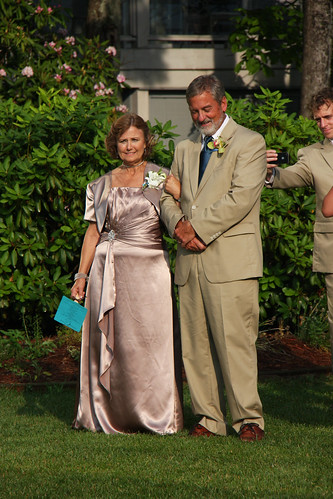 Geneva and Tom, the parents of the groom. They feel like family to me. 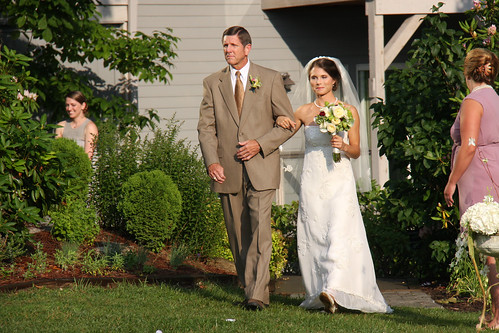 The bride makes her appearance. 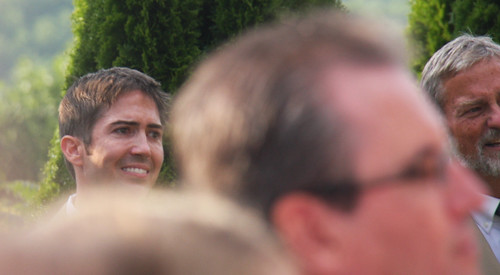 The groom can't hold back his emotions. 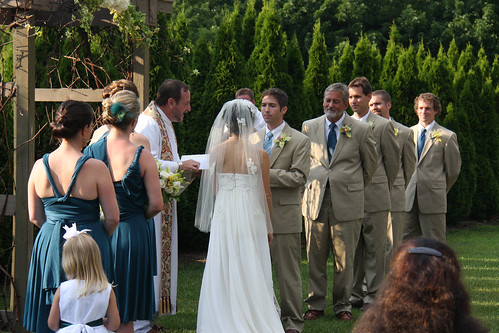 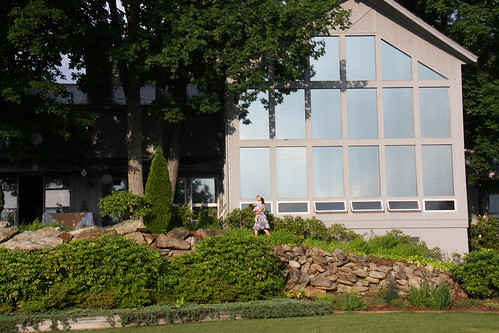 Nora got a little noisy and had to be removed. 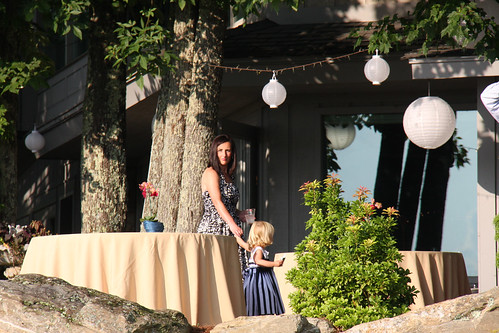 Nora's dress was beautiful, but somehow this is the best photograph I got of it. Luckily we had a professional photo session with the same dress the following week. 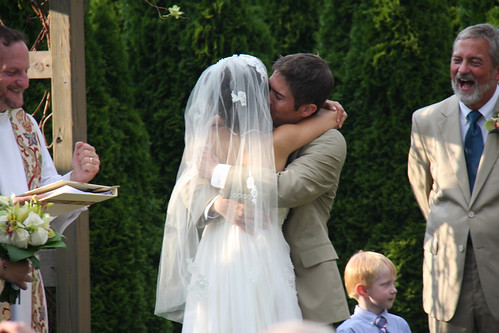 "You may kiss the bride!" 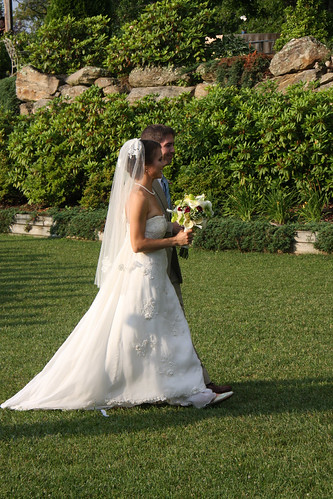 Charley and Christanne begin walking down the path of married life. 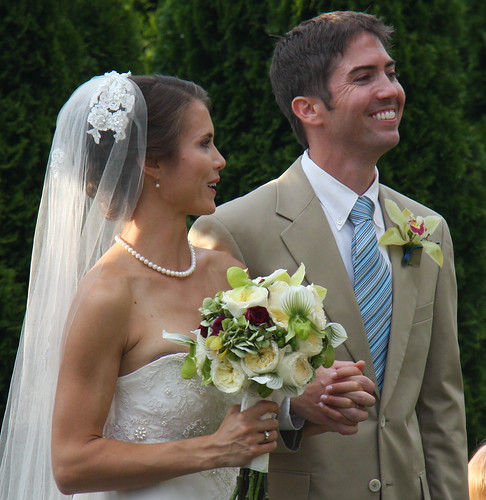 Congratulations, you two! Thank you for inviting us to your wedding. We had a wonderful time.