My parents have three dogs: Buster, Sam and Blue. I learned almost a decade ago that Buster was the most likely to actually bite someone when I got a little too rough playing with him and I got a tooth to the bridge of my nose. It didn't break the skin, but it was sufficiently scary to give me a sense of cautious respect when dealing with Buster. We knew from our very first visit with Nora that Buster should never really be in the same room with Nora. Buster is the alpha dog of the house and is pretty much completely deaf, as old springers often are. 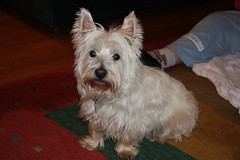 Sam is the #2 dog on the house totem. With humans, he's the sweetest, most friendly of the three. With other dogs, he's the enforcer that keeps other dogs in line. Sam is the dog that we are least worried about biting Nora. Once, on a previous visit, he did give her a "Stop bothering me!" bark that freaked her out for a couple hours, but that's all he's ever done. However, he's still a dog that is not used to having children around, so we keep an eye on him.

Blue is a border collie, bred to herd sheep with a solid work ethic and desire for control of his surroundings. Blue is, for lack of a better word, autistic. His social skills with other dogs and especially with people are very lacking. There are very, very few people, with the exception of my parents, that can touch Blue. He shies away from any human contact. Generally this makes him docile and the furthest thing from a threat, but sometimes those shepherd authoritarian neurons fire and he can be aggressive and controlling. One time Marga and I were walking around my parents' yard and Blue decided he needed to herd us, which involved circling us very aggressively and nipping at us with snarls. It was quite scary.

For this visit to my parents' house, it was decided that Buster should stay at a kennel because we learned during our last visit that he's a howler when locked up in his crate in the garage. It was decided that Blue can be let out of his garage crate every so often, but mostly only when Nora was sleeping or away from home. On the first full day of our visit, however, there was a miscommunication and Nora followed her grandmother to the garage, unaware that she was going there to release Blue. Blue and Nora both came around a corner at the same time, in opposite directions, and had an encounter. I didn't see what happened, but he gave her what is technically referred to as a "tooth bump", which is sort of like a bite, but without the full flesh-ripping force that could be applied.

Needless to say, Nora freaked the hell out and cried for a good while. Blue was immediately put in the car and taken to the kennel for the remainder of our stay. Nora was scared of Sam for the rest of the day, but luckily seems to have gone back to being his friend since then. I was concerned that such an incident might introduce a general lifelong fear of dogs, but it looks like it hasn't. Her bruise clearly shows the teeth marks from the bite. 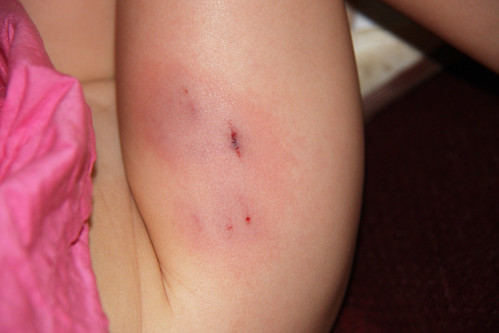 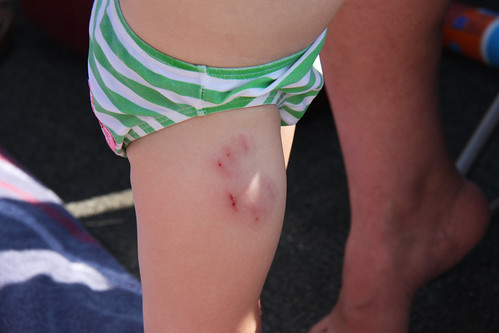