On June 18, 2011, we all got up fairly early, but not to play golf. It was "go back to the airport" day. We checked out of the Perryville House, piled into our rented "people carrier" and began the two hour drive for Shannon airport. Since I had lived and driven [on the wrong side of the road] in England for four years and also get motion sickness when I'm in the backseat, I was the designated driver for most of our Ireland trip. This was great, except for when everyone else nodded off to sleep and I had to fight the same urge myself. We drove through Cork and headed due north up to Limerick and eventually to Shannon. First, however, we had to stop at the original Bunratty Courtyard B&B that the others had stayed in to pick up Paul and Jeff's golf club travel bags, which had been left behind in the interest in fitting all of us in the vehicle. Jacob and I would be staying that night at the B&B before our early departures the following day. After leaving Jacob and his and my things at the B&B, I drove Jeff and Paul to the airport where we hugged and congratulated each other on a wonderful trip. My TomTom app on my iPhone got me lost on the way back to the B&B, sending me down the most gorgeous picturesque road, to a house that was most definitely not the place I was looking for. I summoned what very little innate navigational skills I have (ask my wife!) and managed to find my way back to the B&B. After a 20 minute wait, our room was ready, and we moved our suitcases in. Our friend, Patrick O'Connor, owner of Old Head, had suggested that Jacob and I try to play a course called Lahinch that day if we could. The B&B owner told us that there were some lovely cliffs that attracted tourists up near Lahinch as well. Jacob and I evaluated the situation: we had a car, our golf clubs, and a free afternoon in Ireland with a famous links course 45 minutes away. It was a no-brainer. We hopped in the car and headed for Lahinch.

We arrived in Lahinch, population 600, at about one o'clock in the afternoon. The first thing we did was head to the course and inquire about tee times. We were informed that they had a tee time available at 4:30 PM (a round of links golf takes almost 5 hours, but the sun was setting at 10:00 PM). They said we had to pay our green fees by 4:00 PM to secure our tee time. We agreed to do so and headed to a local pub for a cheeseburger.

After we had our lunch we decided to drive fifteen minutes up to the Cliffs of Moher, some impressive cliffs on the Irish coast. I've lived through a couple hurricanes, and I think the wind on those cliffs was some of the strongest I've ever felt. I don't know for sure, but I'm inclined to think it was upwards of 160 kph (100 mph). Standing in one place was very difficult. 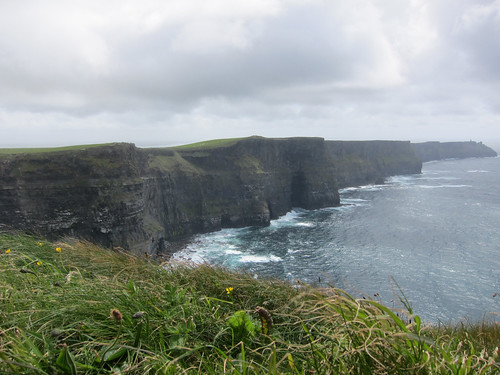 Apparently these cliffs have been used in countless movies, including The Princess Bride. 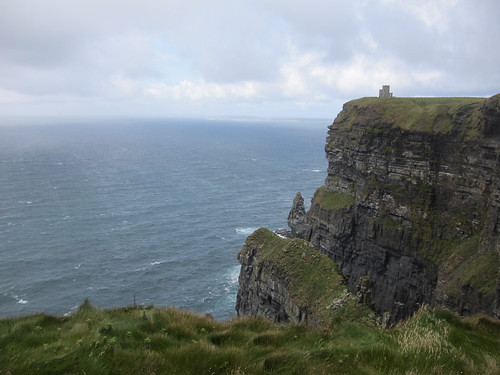 We decided not to spend the 2€ to visit the top of that tower.

After a trip to the loo and gift shop, it was time to head back down to the golf course. We paid our fees on time and were teeing off by about 4:25 PM. Lahinch is a spectacular links course, a favorite of tour pros Stewart Cink and Phil Mickelson. It was the course in Ireland that felt most like The Old Course in St. Andrews, Scotland, and rightfully so, as it was the only one we played that was designed by Old Tom Morris, golf's founding father. But it was more than that; it was the combination of views of the town and the beach and the wind. 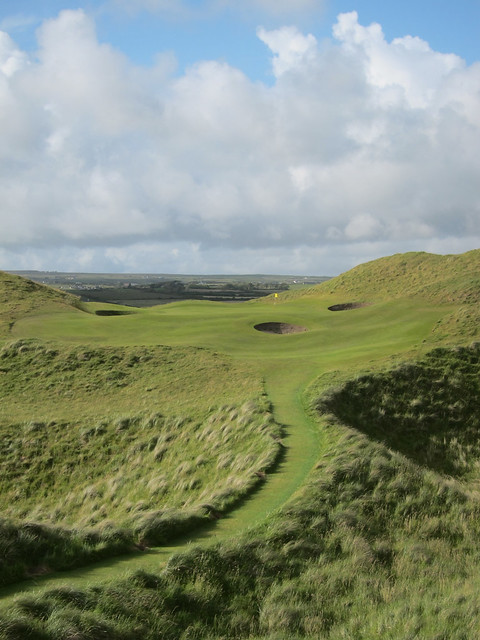 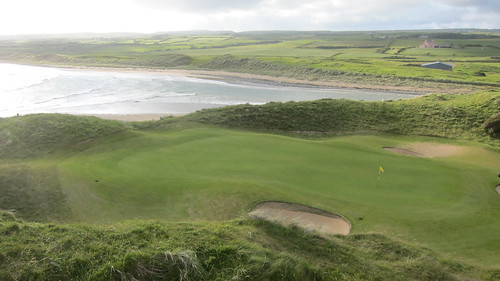 This was actually a shot Jacob had from up on this high dune. 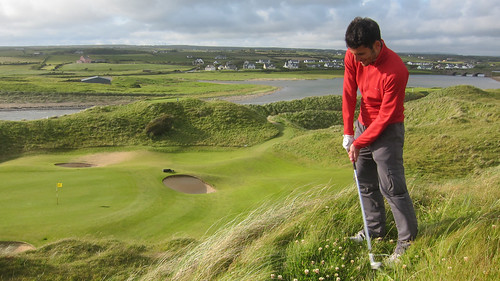 After about eight holes, my golf game really started to shape up. I sunk a birdie putt on the ninth hole, and I still can't believe I missed a two foot birdie putt on the eleventh (Worst. Par. Ever.). If my putt on the eighteenth would've fallen in rather than lipping out, I'd have had all pars and two triple bogeys on the back. As it was, I had a seven-over 43, my best nine in Ireland. On the fifteenth hole, we finally got to experience the dreaded Irish trifecta of rain + wind + cold as a storm blew over, leaving our extremities numb for a few holes.

We finished up by 9:15 PM and made it back to our B&B by 10:00 PM, just in time for all the nearby pubs to tell us that they'd stopped serving food for the night. Jacob turned on his puppy dog charm, however, and managed to convince a waitress to give us some hot vegetable puree, which really hit the spot. It took us no time whatsoever to fall asleep that night, which was good because we had to get up at 6:00 AM to frantically drive around trying to find a petrol station to fill up the rental car before getting me to the airport in time for my 7:30 flight. Despite traveling only one timezone away, I needed one more flight than Jacob and just barely got to Spain before he got to Texas. 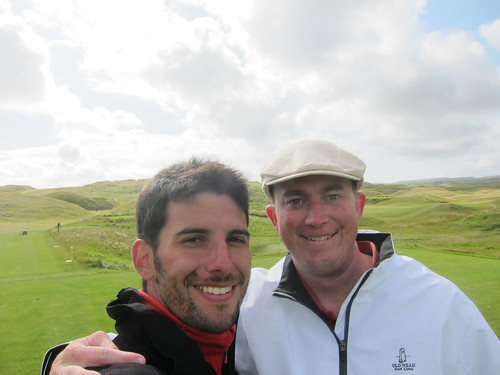 It was a wonderful and unforgettable trip, just as I'd hoped it would be. Thank you very much to my friends, Jeff, Paul and Jacob for making this week in Ireland so lovely. The fact that I almost couldn't go made it all the more special.