On June 17, 2011, we played one of the most unique golf courses on the planet: Old Head. Originally just a peninsula jutting into the Atlantic Ocean, it was purchased in 1989 by the O'Connor brothers, John and Patrick, for a mere 245,000€ from a farmer who was frustrated that his sheep kept falling to their deaths over the steep cliffs.

When humans first settled Ireland over 6,000 years ago, they immediately recognized the Old Head peninsula as an easily defendable lookout post. There are still traces of Iron-age Celtic structures at Old Head. From ancient times up until the 17th century the Stone of Accord, a stone with a hole in it at arm height, was used to seal important deals, including weddings. Each wedding agreement was only good from one year, from May until May, and had to be renewed by shaking hands through the Stone of Accord each year. In more modern history, Old Head was the closest bit of land, only 12 miles away, to the place where the RMS Lusitania sunk after it was torpedoed by a German U-boat, killing 12,000 passengers. The attack on the Lusitania is generally agreed to be the Pearl Harbor of World War I, the incident that pulled the United States into the war. The last survivor, a baby of three months at the time of the attack, just died this past January at the age of 95. 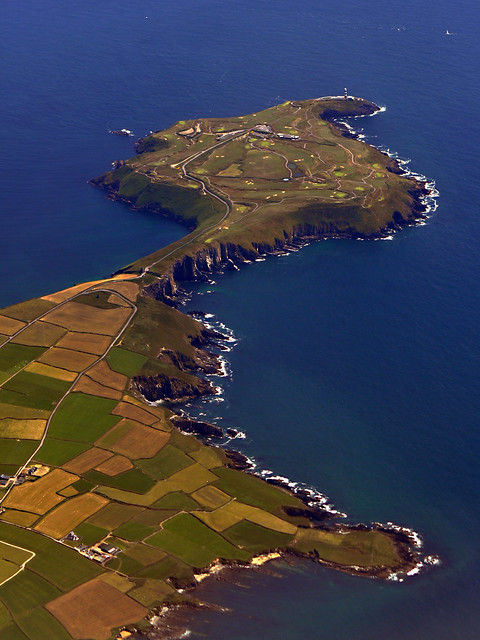 From this angle, you can really get a sense of just how geographically special this location is. 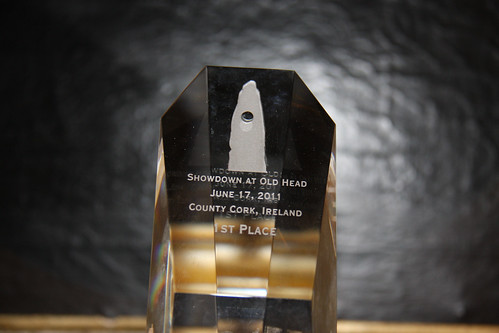 On our final golfing day as a foursome, we were playing a special modified Stableford scoring system designed to reward aggressive play. The tournament was called Showdown At Old Head, and we were playing for a crystal trophy with a Stone of Accord logo I personally photoshopped. 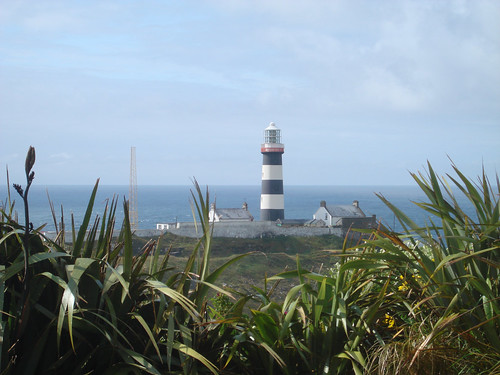 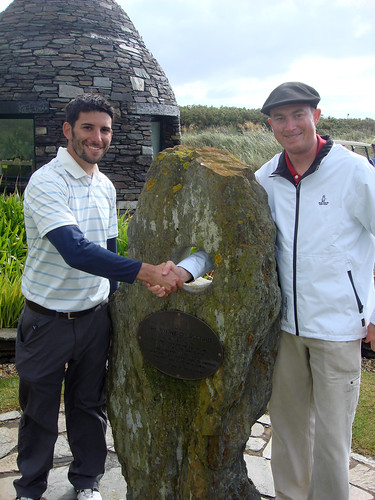 Of course we started the round with firm handshakes through the Stone of Accord (a replica of the original). 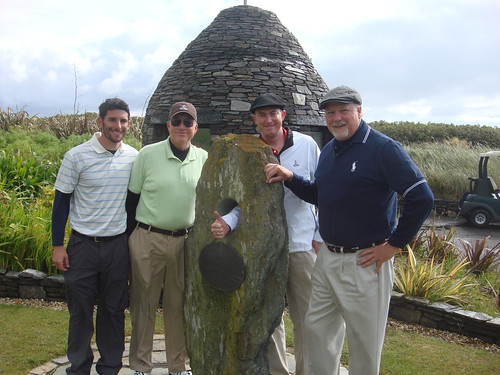 We're all in accord. 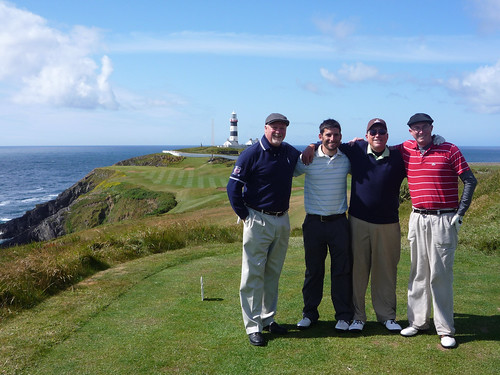 Four golfers at Old Head. For at least half of the round, both Jeff and I were in short sleeves; that's how fabulous the weather was. 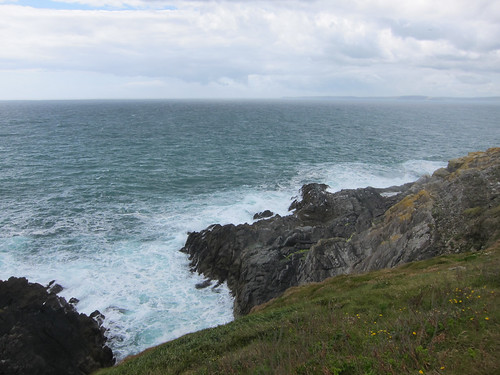 Golfing above the crashing waves. 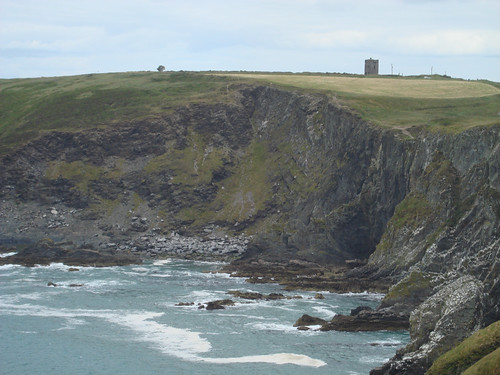 Now that's what I call a lateral hazard!

My father, Paul, won the Showdown at Old Head pretty handily. I was glad to see him win, as I think he deserves a trophy on his mantle for all the hard work he put into organizing this golfing vacation of a lifetime.

After the golf, we were making our way from loading the clubs in the car to the bar for a beer, and Jacob, my childhood friend, said to my father, "Hey Paul, come here, I want you to meet someone." Jacob had somehow befriended none other than Patrick O'Connor, one of the fraternal owners of Old Head. Patrick sat down with us and sipped a glass of wine while we gulped our beers. He seemed genuinely pleased to be talking to a group of middle-class Americans who had come across the sea to play his course. We had lots of questions, and he was more than happy to tell us about his life's project. It was definitely the first conversation I've ever had over a drink with someone who travels in his own private jet. 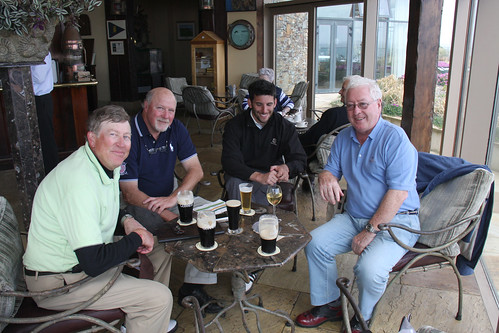 Having a drink with Old Head co-owner, Patrick O'Connor. 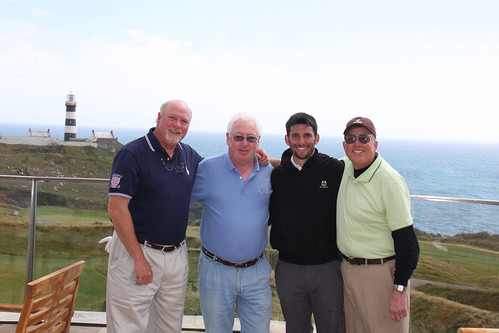 Hanging out with Patrick on his peninsula. The people that can afford to be members at Old Head don't travel there by car; they use the helipad.

We asked Patrick for dinner recommendations in Kinsale, and he recommended a place the guide books don't mention named Shanghai Express, and described it as "oriental tapas". We were a little wishy-washy on our dinner plans, so we decided to take his suggestion, especially since he said he might be having dinner there, too. And sure enough, we only had time to place our first order by the time Patrick and his sister showed up. They were given their usual table, but he specifically asked the waitress to put another table next to his for us to move to. One phrase Patrick used twice to describe the uniqueness of Old Head stuck with me was this:

There will never be another course like Old Head in the first, second or third world, because regulations have tightened and you just can't build that close to the cliffs anymore. 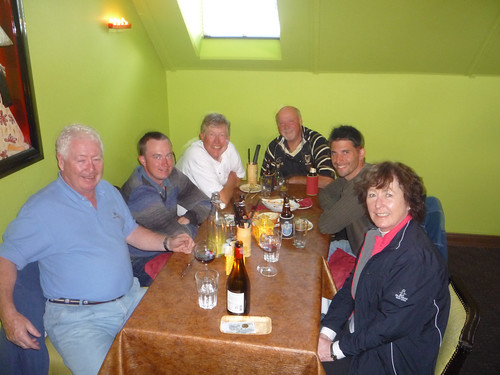 The six of us enjoyed our many small servings of asian food.

That night, we hit the town of Kinsale looking for some nightlife. On about the third bar, we found The Folk House and we caught a performance of She's Electric (sample songs to listen to there), Ireland's only all female live band. They were pretty amazing, despite the half dozen creepy 45-year-old German men groupies. It was really difficult to take one's eyes off the charismatic lead singer, Gemma Sugrue. We stayed for their whole set. 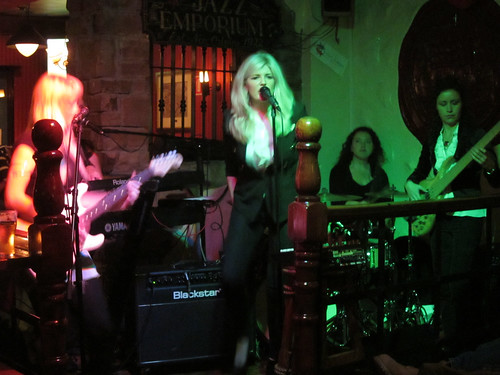 She's Electric. I kept waiting for them to cover the Oasis song of the same name. 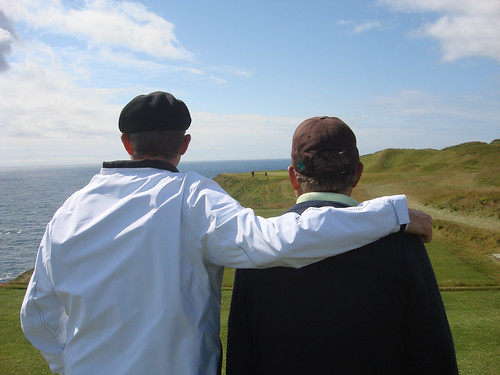 What a great trip.